It was the first time a Democrat won Alaska’s sole House seat since 1972, when Nick Begich, Sr. defeated Young despite having disappeared several weeks before the election. Begich’s grandson, Nick Begich III, was the other Republican in this year’s special election.

It was a fitting end to a month that saw President Joe Biden resuscitate his legislative agenda, House Democrats hold one hotly contested seat and come close to flipping two others (all in special elections), and abortion rights activists score a major win in Middle America.

When she takes office, Peltola will be the first woman, and the first Alaska Native, to represent the Last Frontier in the House of Representatives. 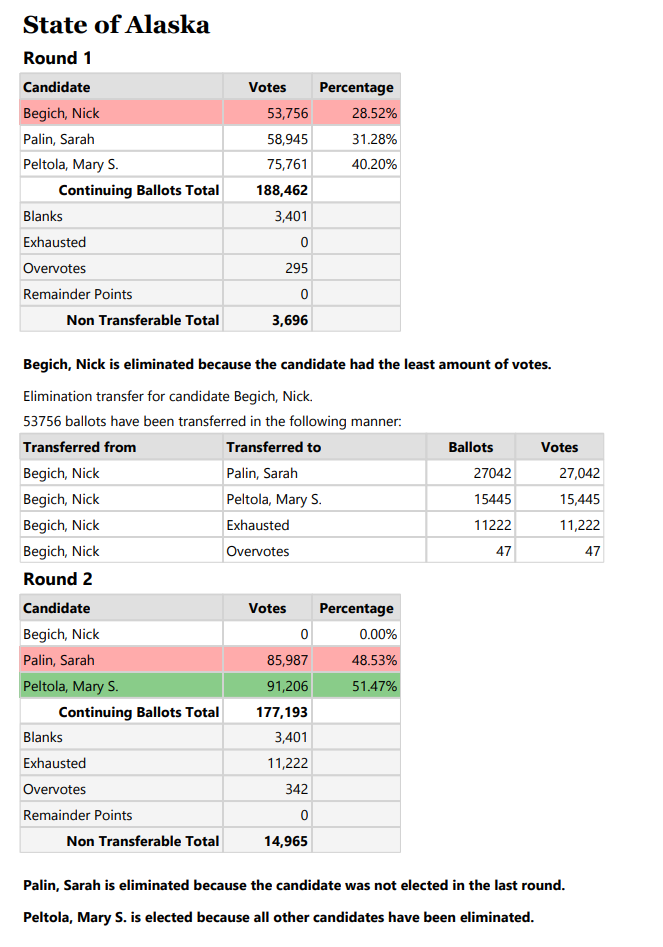 The result is also notable because it is the first-ever application of Alaska’s unique instant runoff election system. Voters not only picked their preferred candidate, but also had the option of selecting a second and third choice.

Palin is a uniquely polarizing figure in Alaska politics. Her brief tenure as governor and subsequent decade as a TV personality in the “Lower 48” made her deeply unpopular with voters. Twice as many voters viewed her unfavorably (61 percent) as viewed her favorably (31 percent) according to a July poll from Alaska Survey Research. Those feelings — even more intense among Begich voters — drove enough Republicans to put Peltola as a second choice and allow her to win.

And Peltola’s own strengths as a candidate put her in a position to take advantage of Palin’s weaknesses. Her two decades in the state legislature gave her a solid voter base in Bethel, allowing her to clinch the fourth spot in the special primary. Her potential to make history as the first Alaska Native ever elected to Congress helped her consolidate the Native vote. Her wildlife work gave her a compelling, nonpartisan issue to run on — her campaign boasted of being “pro-fish.”

And her fundraising was robust enough to bring on board a top-tier campaign team that included local shop Ship Creek Group, as well as two veteran national consultants: admaker Martha McKenna and pollster Celinda Lake.

If Alaska had not overhauled its election system, and Palin and Peltola had each won their respective party primaries before taking each other head-on in the general election, the race would still have been, in all likelihood, quite competitive.

Alaska isn’t so Republican as to preclude Democratic victories under the right circumstances. President Donald Trump carried the Last Frontier by just 10 points in 2020, and Democrats have come close to winning districts of similar partisanship in special elections since the Dobbs decision came down this summer. Democrats came within 6 points of winning Nebraska’s 1st District and New York’s 23rd District (Trump won both by 11 points in 2020) and just 4 points short in Minnesota’s 1st District (Trump won there by 10 points).

Although Democrats came close in all those races, they didn’t win any of them. But they also didn’t have the benefit of facing highly controversial opponents like Palin.

If Begich had emerged from a traditional GOP primary, the same data that suggests he would have performed better than Palin in the instant runoff indicates he would have had an easier time winning a general election. Peltola only achieved her narrow majority because of anti-Palin Begich voters, and the polling indicates there were far fewer anti-Begich Palin voters.

In either election format, Peltola — like strong candidates in the specials earlier this month  — would give Democrats a baseline level of competitiveness they lacked in previous special elections in Texas’ 6th and 34th Districts. And in either format, the ultimate degree of competitiveness would come down to the last GOP candidate standing.

The Advantage
Peltola did benefit from the new system in at least one way.

As the only Democrat in the race, Peltola’s path to victory was to scoop up all of the Democratic votes in the first round, and then pick off enough Republicans to win the instant runoff. She was aided by the decision of independent Al Gross (the 2020 Democratic nominee for Senate) to drop out and endorse her rather than compete with her for Democratic-leaning votes.

For Palin and Begich, the path to victory started with beating the other Republican out for second place, and only then focusing on winning enough second-choice votes to win. As a result, Palin and Begich, and their allies, spent the campaign attacking each other, rarely if ever training their fire on Peltola.

And Peltola, rather than launch broadsides against either of her potential GOP opponents, focused on increasing her own name ID and favorability ratings. She ran positive spots on TV, emphasizing her rural roots, pro-fish agenda, and support for abortion rights.

As a result, Peltola’s image was the strongest of the three candidates heading into election day. Just 11 percent of voters had an unfavorable view of her in July.

In a traditional election system, the winner of the GOP primary would have had several months to consolidate support before facing a Democrat. But under the new system, Palin had no time whatsoever to actively consolidate support from Begich voters after bashing Begich all summer, or give Peltola her full attention. More than 11,000 Begich voters chose not to rank either Palin or Peltola. If just half of those “bullet voters” had instead selected Palin as their second preference, she would have won.

The Big Picture
Democrats are already clinging to a reed-thin majority in the House. And numerically speaking, Peltola’s win won’t even change anything, since Florida Rep. Charlie Crist resigned Wednesday to focus on his gubernatorial run.

Peltola’s win does change the majority math for the GOP. While Republicans previously needed to flip four seats to reclaim control of the House, they will now need to flip five seats. The GOP’s targeted net gain had been five seats for most of the cycle, but went down to four seats after Mayra Flores’ victory in Texas’ 34th District.

One of Republicans’ top targets in November will undoubtedly be: Peltola. The incoming congresswoman will be running for re-election in the second-Trumpiest district of any Democratic incumbent in the nation, after Rep. Al Lawson in Florida’s 2nd District.

Her victory will shine a light on the complexities of the instant runoff system, and will also throw Palin’s weaknesses in sharp relief, for Alaska voters and GOP strategists in DC to see. It wouldn’t be surprising to see an effort in the coming weeks to ease Palin out of the race and let Begich have a clear shot. If that’s the case, the limited information we have suggests he would begin as a slight favorite against Peltola.

But the former vice presidential nominee is anything but predictable, and could be determined to run full throttle toward November.

That uncertainty, combined with the still-new system, and the presence of a fourth candidate (a Libertarian) on the November ballot, gives Peltola a well-defined if narrow path to re-election in the fall. This race moves from Solid Republican to Tilt Republican.

This story first appeared in InsideElections.com on September 1, 2022.