Maine Redistricting: Same As It Ever Was

On Sept. 29, Maine became the second state to finalize its congressional districts for the next decade, capping a six-week process more notable for what it wasn’t: contentious, protracted, or extensive.

With just two districts to draw, minimal population shifts, and a redistricting scheme that encouraged compromise, the whole ordeal was relatively painless. Democrats and Republicans in the state legislature each proposed similar maps on Sept. 16, and it took just eight days to reconcile their differences into a unified proposal submitted on Sept. 24 and approved a few days after that.

Since Maine lost its third congressional district following the 1960 Census, the Pine Tree State has divided itself into a southern 1st District encompassing Portland and Augusta, and a northern, and more rural, 2nd District covering the rest of the state.

Most of the state’s population growth was in the 1st District. That meant lawmakers had to move roughly 23,000 residents from the 1st into the 2nd to balance the two districts’ populations. They achieved that by placing Augusta, the state capital, in the 2nd for the first time.

The result is a slightly modified version of the map Maine used for the last decade, with only a few precincts in one county (Kennebec) shifting between the two districts. It does not change the underlying political situation, in which the 1st District is a Democratic stronghold and the 2nd District is highly competitive.

As one of just two states in the nation to allocate Electoral College votes by congressional district, redistricting in Maine affects not just the fight for control of Congress but also the presidential race, with the 2nd District a sought-after prize in the race to 270.

The 1st District
The 1st District, represented by Democrat Chellie Pingree since she was first elected in 2008, shed Augusta but picked up several precincts around Waterville, to reach its target population of 681,179.

The demographic makeup of the 1st is virtually unchanged: 92 percent White, and 2 percent each Black, Hispanic, Asian, and Native American.

Politically, the new 1st will be a hair more favorable to Republicans. President Joe Biden would have carried it by 22.8 points after winning the old 1st District by 23.4 points, 60.1-37 percent.

In 2020, Pingree easily dispatched physician Jay Allen by 24 points, 62-38 percent. She hasn’t had a competitive race since 2010 and only one Republican — retired Navy Seal Ed Thelander — has filed to run against her. Redistricting doesn’t change much here, so this race begins with a Solid Democratic rating.

The 2nd District
Redistricting may make life marginally easier for sophomore Rep. Jared Golden, the Democrat from Lewiston who has represented the 2nd since he was first elected in 2018. The addition of Augusta gives him a few more Democratic voters to lean on, but doesn’t change the overall Republican tint of his district. 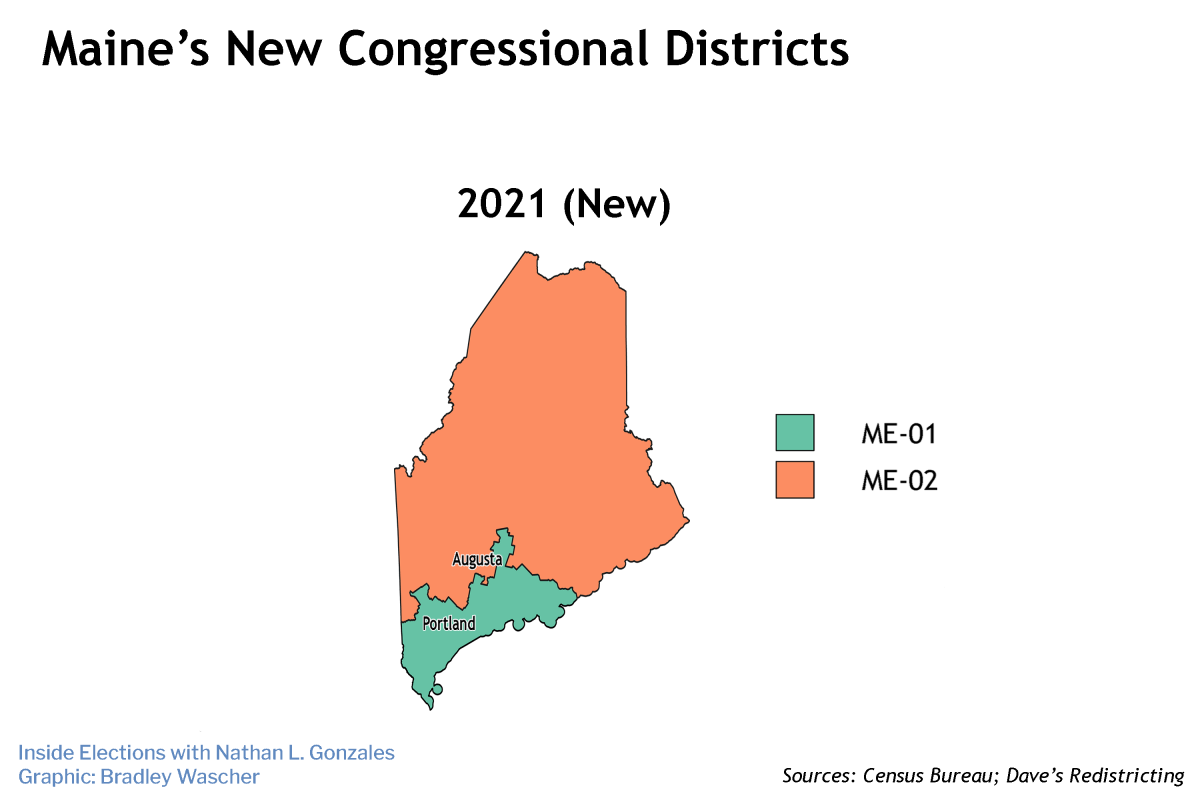 Under the old lines, Trump carried the 2nd District by 7.4 points, 52.3-44.8 percent. That makes it the most Trump-friendly district currently represented by a Democrat. Trump would have carried the new 2nd District by a slightly narrower 6.1-point margin, 51.6-45.5 percent. The 2nd has tended to vote for Republican statewide candidates in recent years, including Sen. Susan Collins in 2020 by 23 points, 58-35 percent, and gubernatorial nominee Sean Moody by 2 points, 48-46 percent, but also supported Sen. Angus King, an independent who caucuses with the Democrats, by 10 points, 50-40 percent, in 2018.

Golden won a closer-than-expected re-election in 2020 against former state Rep. Dale Crafts, a lackluster candidate who the NRCC triaged well before Election Day; he beat Crafts by 6 points, 53-47 percent.

In 2022, he will likely face former GOP Rep. Bruce Poliquin, who he ousted back in 2018 in the nation’s first congressional election decided by ranked-choice voting. Though Poliquin led Golden in the initial round of voting, 46.3-45.6 percent, Golden edged out Poliquin 50.6-49.4 after votes from minor-party candidates were reallocated.

Poliquin’s early entrance in this race gives Republicans a top recruit who could take advantage of a backlash to Biden and congressional Democrats in next year’s midterm elections. Golden was going to be vulnerable no matter what because of the partisan lean of his district, and having a strong opponent only increases the competitiveness of this race.  (Read more detailed analysis of the Maine 2 race in the Sept. 23 issue of Inside Elections.)

Given the historical trends associated with midterm elections, the partisanship of the new 2nd District, and the strength of his likely opponent, Golden’s re-election begins as a Toss-up.

This story first appeared in InsideElections.com on October 11, 2021.