New Mexico has just three congressional districts, but as one of just seven states in which Democrats fully control the mapmaking process it has drawn serious attention from national Democrats eager to press any advantage that helps them defend their five-seat majority in the U.S. House of Representatives.

The map in use for the past decade — drawn by a state court in 2011 — had two Solid Democratic districts and one Republican-leaning district that a Democrat could win in the right conditions.

But for the first time since the 1990s, Republicans were completely shut out of the mapmaking process. So the Democratic-controlled state legislature drew (and the Democratic governor signed into law) a map intended to oust the state’s sole Republican member of Congress: 2nd District Rep. Yvette Herrell.

In doing so, Democrats have increased the exposure of their other two, previously safe, representatives. While their gamble is not as risky as the one made by Democrats in Nevada, it does open the door to the possibility Republicans could win a second district for the first time since 2004, if a GOP wave develops. 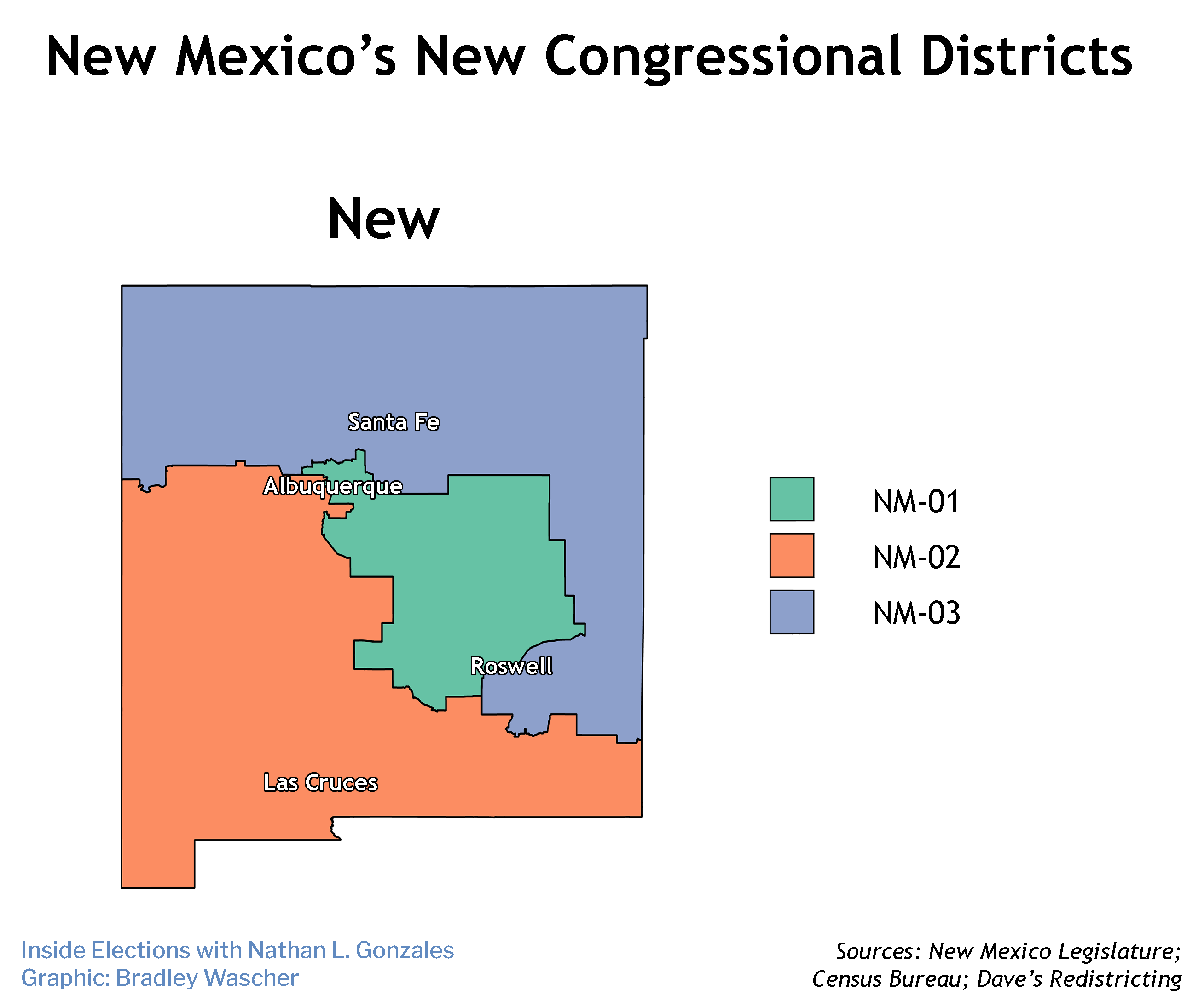 To replace the lost population, the legislature shifted more of the southeast corner of Sandoval County (Rio Rancho) into the 1st District from the 3rd District. The new 1st also includes all of Guadalupe, De Baca, and Lincoln counties, and parts of Chaves and Otero counties — large pieces of land with small populations from the old 2nd District.

As a result of surrendering some of Albuqurque to make the 2nd more fertile for Democrats, the 1st is now more Republican than its previous iteration. Joe Biden would have carried the new district by 14 points, 56-42 percent, rather than his 23-point win, 60-37 percent, under the old lines.

That’s uncomfortable for Stansbury but still provides a solid cushion for her first re-election campaign. In the June special election that got her to Capitol Hill, she beat out several more progressive opponents for the nomination and then put up a convincing win against a well-regarded Republican state senator in the general election, overperforming Biden’s margin from 2020. Retired police officer Michelle Garcia Holmes, who was the GOP nominee for this seat in 2020 is running again. Solid Democratic.

2nd District
The big question heading into redistricting was how aggressive Democrats would be to oust Herrell. The answer: quite so.

By swapping out a quarter of Herrell’s old constituents for residents from solidly Democratic Bernalillo County, the new map turns the 2nd District — still the southern half of the state but slightly reduced in area — from a seat President Donald Trump carried by 12 points, 55-43 percent, into one that Biden would have carried by 6 points, 52-46 percent.

That makes Herrell one of the most vulnerable Republican incumbents in the country, but it’s not an unfavorable enough partisan lean to preclude her from winning in a good year for the GOP. A handful of Republicans won districts Biden carried by more than 6 points in 2020, and 2022 should be a better national environment for the GOP. Herrell had $980,000 in campaign funds at the end of September.

Democrats have begun to coalesce around Las Cruces City Councilman Gabe Vasquez. But the addition of western Bernalillo could prompt some more moderate Democratic officeholders in Albuquerque to take a look at running as well, potentially Albuquerque City Councilwoman Klarissa Peña or Bernalillo County Commissioner/Breaking Bad actor Michael Quezada. Former Rep. Xochitl Torres Small, who beat Herrell in 2018 and lost to her in 2020, is now the under secretary of agriculture for rural development in the Biden administration. Toss-up.

3rd District
Freshman Rep. Teresa Leger Fernandez’s 3rd District is still the northern half of the state but now also includes parts or all of several heavily Republican counties — Roosevelt, Lea, Chaves, and Eddy — that were previously in the 2nd District.

The new configuration is less favorable for Leger Fernandez than the district she won in 2020. The new constituency would have voted for Biden by just 10 points, 54-44 percent, while the previous iteration voted for Biden by 17 points, 57-40 percent. And while the old district had a narrow plurality Hispanic voting age population, the new district's voting age population is narrowly plurality white. Sources tell New Mexico politics guru Joe Monahan that Leger Fernandez is irate at the changes to her district.

She has some reason to be. As a freshman, she has barely had time to introduce herself to the voters in her current district, where she won a crowded primary as the most progressive candidate just a year and a half ago. Now she’ll also have to introduce herself to the conservative southeast portion of the state (“Little Texas”) too, which makes up 20 percent of her new district.

Republicans are already talking about seriously contesting this district, but first they’ll need to find a candidate. Alexis Martinez Johnson, the engineer who lost to Leger Fernandez in 2020 by 17 points is considering running again. Another intriguing option is Claire Chase, the director of community relations at Mack Energy Corp.  who was the runner up for the 2nd District GOP nomination in 2020. Her Roswell home is now in the 3rd District.

Running as a Democrat in a district Biden won by double-digits affords Leger Fernandez a large measure of security. But she had just $266,000 in the bank on Sept. 30, so if this race heats up she’ll have to kick her fundraising into a higher gear. Likely Democratic.

This story first appeared in InsideElections.com on December 31, 2021.