Winning has consequences. Electoral success in House races over the last decade made the latest round of redistricting more complicated for New Jersey Democrats because they have more incumbents. The final result looks like one of their own will face a very challenging re-election race.

Ten years ago, a seven to six Democratic advantage in the New Jersey delegation went to six Democrats and six Republicans following reapportionment, redistricting, and the 2012 elections. Now, Democrats headed into the redistricting cycle with 10 incumbents compared to just two Republicans. New Jersey didn’t lose a district in reapportionment this time, but Democrats on the state’s legislative redistricting commission chose to make one of their incumbents less secure in order to help out several of their other vulnerable members, thus limiting the potential damage in a Republican wave election year.

Considering Republicans need a net gain of just five seats to retake the House majority, Democrats can’t afford to lose any seats. But redistricting is about the near term and the long term, and having most of the Democratic incumbents in solid seats could help the party over the next decade. 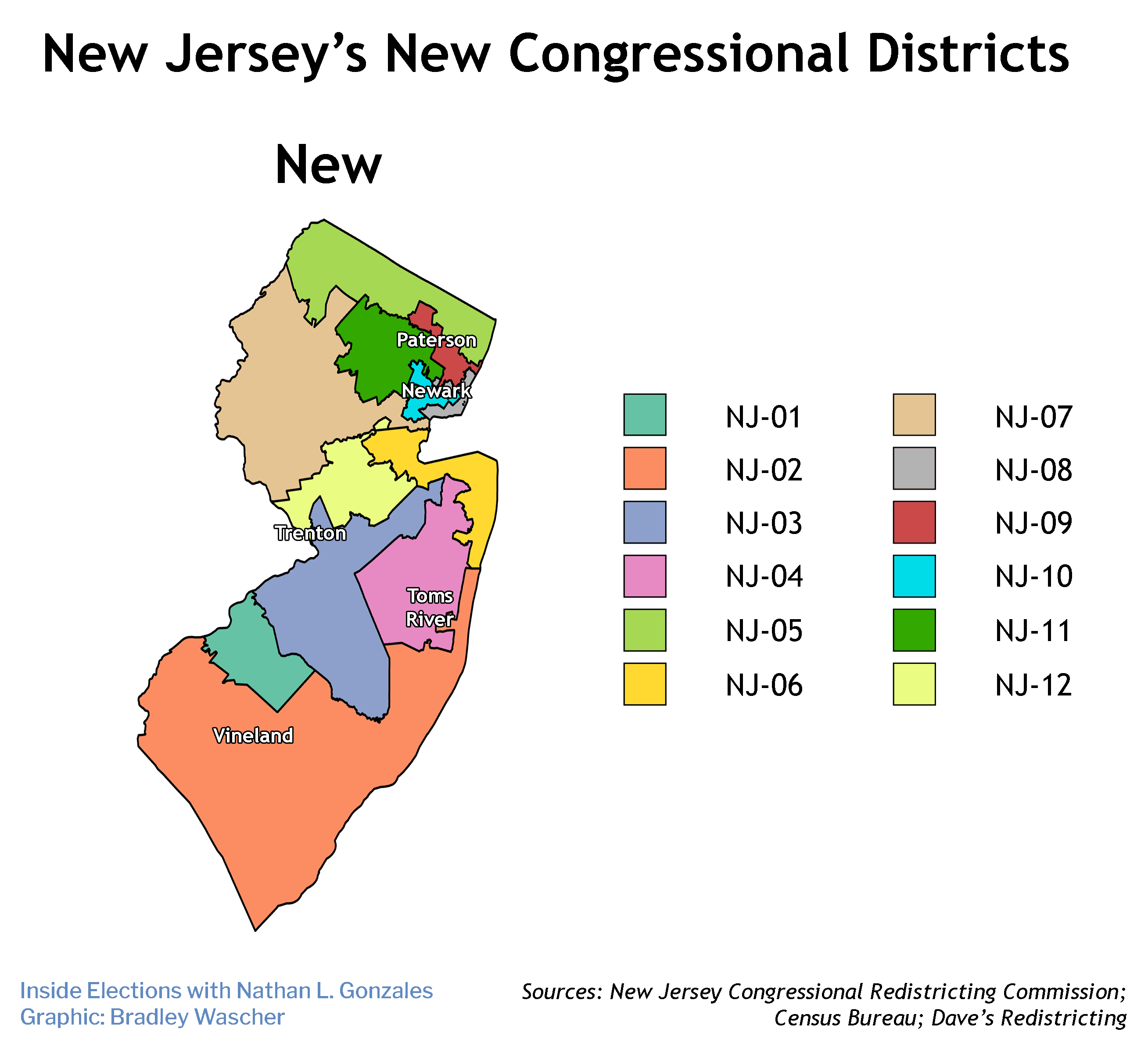 1st District
South Jersey power broker George Norcross might be decamping to Florida, but his brother Rep. Donald Norcross is staying put in his Camden-anchored district, which is nearly unchanged from the past decade. The new constituency would have voted for Joe Biden, 62-37 percent and there’s no reason to believe GOP candidate Claire Gustafson will fare much better than in 2020, when she lost to Norcross by 25 points. Solid Democratic.

2nd District
Democrats flipped this South Jersey seat in 2018 only to see it slip from their grasp in 2019 when Jeff Van Drew switched parties during President Donald Trump’s first impeachment.

In 2020, Democrats went all out to oust Van Drew, with outside groups such as House Majority PAC and the Democratic Congressional Campaign Committee spending more than $7 million attacking the congressman and boosting Democratic nominee Amy Kennedy. But Van Drew dispatched Kennedy, 52-46 percent, and now has an even more favorable district to run in.

In order to reach its target population, the new 2nd extends further north into Ocean County to include all of Stafford, Barnegat, and Ocean townships, and parts of Berkeley Township. That’s Republican territory, so under the new lines Trump would have carried the 2nd District by 5 points, 52-47 percent, a slight increase from his 51-48 percent win under the old lines.

This district may be winnable for Democrats in a better national environment. Tim Alexander, a Black former Philadelphia assistant district attorney and Atlantic County detective who is now a civil rights lawyer, is an intriguing candidate but hasn’t raised much money — just $176,000 in the first nine months of 2021. Solid Republican.

3rd District
The new map significantly shores up sophomore Democratic Rep. Andy Kim. The 3rd is still based in the Philadelphia suburbs but sheds its Republican-leaning coastal areas and picks up a swath of Democratic territory in south Mercer County, near Trenton. The district also now extends an arm northeast through Monmouth County to Marlboro and Middletown. As a result, Kim no longer has to run in a district carried by Trump (albeit narrowly, 49.4-49.2 percent) and instead gets a seat that Biden would have won handily, 56-42 percent.

What’s good for Kim is not so good for his likely Republican opponent, Bob Healey, Jr. The scion of a wealthy yacht-building family who, in a previous life, played in a Philadelphia punk band called The Ghouls, Healey was expected to self-fund a significant portion of his campaign against Kim. But he hasn’t said if he’ll continue his campaign now that the district has been redrawn. Kim had $2.7 million in the bank on Sept. 30 and the partisan lean of the district in his favor. Solid Democratic.

4th District
Republican Rep. Chris Smith’s district traded its Democratic-leaning Mercer County portions to the 3rd District in exchange for the 3rd District’s Republican-leaning coastal portions in Ocean County. Smith’s home of Hamilton was drawn into the 3rd District, but the third-most senior House member told the New Jersey Globe he’ll move to the redrawn 4th and run there.

The new 4th is more Republican than its predecessor, which was already the most Republican district in the state by far: it would have voted for Trump 61-38 percent. That means any danger for Smith will come in a GOP primary, not a general election.

None of Smith’s challengers are well known or well-funded, and the incumbent has represented the area for four decades. The splintered field also works in his favor. But if Trump decides to involve himself more seriously, by endorsing a favored challenger or even campaigning against Smith (given that in the summer Trump lives just north of the 4th District in Bedminster), Smith could face some difficulty. Either way, this district is Solid Republican.

5th District
Third-term Democratic Rep. Josh Gottheimer was also a beneficiary of this redistricting cycle. His North Jersey district still sits in the northernmost part of the state, but its Republican-leaning areas of Sussex and Warren counties have been swapped out for heavily Democratic areas along the Hudson River, down to Fort Lee.

While the old district voted for Biden by 5 points, 52-47 percent, under the new lines it would have backed Biden by 13 points, 56-43 percent. The three declared GOP candidates are 2020 5th District nominee Frank Pallotta, energy investor Fred Schneiderman, and Marine veteran Nick De Gregorio, but the district’s new partisan lean will make it difficult for Republicans to win.

Gottheimer has angered Democrats in New Jersey and nationwide for his leadership of the “ModSquad,” the nine moderate Democrats who threatened to derail Biden’s infrastructure plans in the House of Representatives. But he had an astounding $11 million in the bank on Sept. 30 and has yet to draw a primary challenger. It is unclear if he will (the filing deadline is April 4). In 2020, Gottheimer faced a primary challenge from Glen Rock councilwoman Arati Kreibach, who was backed by several progressive organizations including Indivisible, the Progressive Change Campaign Committee, and the Sunrise Movement. She lost to Gottheimer, 66-33 percent. Solid Democratic.

6th District
Democratic Rep. Frank Pallone’s Northern Jersey Shore district is barely changed in the new map. The chairman of the powerful House Energy and Commerce Committee already has a formidable opponent in Republican Monmouth County Commissioner Sue Kiley. But Kiley will have to get through a GOP primary that now includes former RNC staffer Tom Toomey (previously running in the 11th District) and 2020 Senate nominee Rik Mehta (previously running in the 7th District) before she can begin her uphill battle against Pallone in a seat Biden carried by 19 points, 59-40 percent. Solid Democratic.

That was with Biden carrying the old 7th by 10 points, 54-44 percent. Under the new lines — which add the rest of Republican Warren County and southern Sussex County, Biden would have carried the 7th by just 4 points, 51-47 percent, and according to The New Jersey Globe, GOP gubernatorial nominee Jack Ciattarelli would have carried the new 7th by 13 points, 56-43 percent. Malinowski is running for re-election, and self-reported $2.7 million in the bank at the end of the year.

Kean, whose father was governor from 1982 to 1990, is running again, and Republicans are confident they have Malinowski dead to rights given Kean almost beat him in a more Democratic district, in an environment more favorable to Democrats than 2022 is likely to be. Malinowski is also the subject of an ongoing House Ethics Committee investigation regarding his stock trades earlier in the pandemic.

But first Kean will have to get through a primary field that includes conservative state Assemblyman Erik Peterson, Fredon Mayor John Flora, and potentially Phil Rizzo, a pastor who placed second in the GOP gubernatorial primary last year and is currently running in the 11th District but could switch.

Malinowksi begins as one of the most vulnerable Democrats in the country, given the newly drawn district and his underperformance in 2020. But that doesn’t mean he’s dead in the water in a seat Biden still won. This will be a top race to watch. Toss-up.

8th District
Eight-term Democrat Albio Sires is not seeking re-election. His all-but-certain successor, Robert Menendez, Jr., has finally officially announced his candidacy, after locking down endorsements from what seems like the entirety of the state’s Democratic establishment from Gov. Phil Murphy on down. Menendez, a Port Authority commissioner, is the son of the state’s senior U.S. Senator, Bob Menendez, who previously represented this area in the House in the 1990s and 2000s. The new district, which still includes Jersey City and the inner New York City suburbs, would have voted for Biden 72-27 percent. Solid Democratic.

9th District
Democratic Rep. Bill Pascrell’s 9th District loses most of its townships along the Hudson River and picks up some of Wayne Township to the northwest, but remains centered on Paterson. Biden would have carried the district 59-40 percent, which means Pascrell should have no issue handling 2020 GOP nominee Billy Prempeh again. That’s a lot different than a decade ago, when Pascrell had to defeat fellow Democratic Rep. Steve Rothman in the primary. Solid Democratic.

10th District
The old 10th District was slightly above its target population, so it had to shed some areas, most notably Maplewood and Linden, and picked up the rest of West Orange, but retains its Newark and Jersey City core.

The new 10th would have voted for Biden by 63 points, 81-18 percent. That means Rep. Donald Payne, Jr.’s vulnerability would be in a Democratic primary, not a general election. He currently faces a challenge from progressive Imani Oakley, the former legislative director for the New Jersey Working Families Alliance.

Payne hasn’t had a real primary fight since he won his seat in 2012, and doesn’t seem to expect one this time around. He raised next-to-nothing between July and September ($67,000) while Oakley raised a paltry but comparatively strong $124,000, including a check from Democratic mega-donor Karla Jurvetson. Payne had more cash on hand at the end of September — $238,000 to Oakley’s $63,000 — and his fourth quarter report should shed some light on how seriously he’s taking the race now. Either way, this district is Solid Democratic.

11th District
Democratic Rep. Mikie Sherrill was also one of the biggest winners of this redistricting cycle. Her Morris County district saw its center of gravity shift eastward, as it dropped its Republican-leaning parts of Sussex County and picked up heavily Democratic areas of Essex County including Maplewood and Millburn, and more of Montclair and Bloomfield.

The new 11th would have voted for Biden by 17 points, 58-41 percent, compared to Biden’s 7-point win, 53-46 percent, under the old lines. That’s good news for Sherrill, who was already a formidable incumbent with $4.5 million in the bank on Sept. 30, and bad news for the bevy of Republicans who had started lining up to challenge her (one of whom, former RNC staffer Tom Toomey, has already switched to another race).

Morris County Commissioner Tayfun Selen leads the Republicans in fundraising with $130,000 in the bank on Sept. 30. Attorney Robert Ković, Passaic County assistant prosecutor Paul DeGroot, and screenwriter/actress Hillery Botschol have raised far less. Former Kinnelon Council President/state GOP committeeman Larry Casha entered after the latest filing deadline. Pastor Phil Rizzo, who placed second in the 2021 GOP gubernatorial primary, is running as well, but may switch to the 7th District. Even in a poor national environment for Democrats, none of them are much of a threat to Sherrill. Solid Democratic.

This story first appeared in InsideElections.com on January 10, 2022.