6 Things I Think After the Texas 6 Special Primary

The special election to replace Rep. Ron Wright, the Texas Republican who died in February after being hospitalized with Covid-19, had the potential to be the first competitive special election of the Biden era. Wright represented a suburban Fort Worth seat that President Donald Trump carried by just 3 points in 2020 (after carrying it by 12 points in 2016).

Instead, the seat is guaranteed to remain in GOP hands, after no Democratic candidate finished in the top two in Saturday’s jungle primary. It’s no surprise that we’re changing our rating to Solid Republican.

The Democratic Party’s best performer, Jana Lynne Sanchez, placed third with 13.4 percent of the vote. That was just 354 votes short of second-place finisher state Rep. Jake Ellzey, who will now advance to a runoff with fellow Republican Susan Wright (Rep. Wright’s widow), who led the 23-person field with 19.2 percent.

With the benefit of a few days’ hindsight, here are six things I think after the Texas 6 special primary.

1. The Trump-era special election boomlet is over. In 2017 and 2018, special elections were the talk of the political town. The race for Georgia’s 6th District, a traditionally Republican seat that Trump carried by just a point, attracted tens of millions of dollars in donor money and countless hours of news coverage. It also jump-started the career of an unknown Democrat named Jon Ossoff, now the youngest member of the U.S. Senate. But it wasn’t just Georgia. Specials in Pennsylvania, Montana, even Kansas and South Carolina were treated as major political events.

By contrast, the Texas 6th race was a sleepy affair from a national perspective. The field of 23 candidates raised less than $3 million combined by April 11 — a tenth of what Ossoff alone raised in that 2017 race. Turnout in Texas was just 16 percent, a drop from 68 percent last November. Turnout in Georgia’s 6th also dropped from 2016 to 2017, but from 76 percent to a still-rocking 58 percent, and in the 2017 Montana special from 74 percent to 54 percent.

Democrats and Republicans agree that Trump was a turnout accelerant when he was in office, and his administration caused a spike in grassroots interest in politics. One of the main questions heading into the 2022 midterms is whether that interest will be sustained with Trump out of office. Saturday’s election is just one data point, but it points to no.

2. Democrats are in defensive mode. Very few national Democratic groups got involved in this race; the Democratic Congressional Campaign Committee was not one of them. The number one objective for Democrats over the next 18 months is to retain their thin House majority, and strategists believe the best way to do that is through incumbent protection, rather than expending resources to put GOP territory in play. To the extent that Democrats see offensive opportunities, it is against the few Republican incumbents who represent districts carried by Joe Biden, such as California’s Mike Garcia and New York’s John Katko. Texas’ 6th doesn’t fall into that category, particularly when Republicans are likely to redraw it to become more Republican before the 2022 elections.

One specific area the results in Texas could sting for Democrats is candidate recruitment. In 2017 and 2018, Democrats in DC used the party’s overperformances and victories in special elections to convince potential candidates across the country to take the plunge. For recruits on the fence about 2022, seeing Democrats fail to field a runoff candidate in a district Trump won by just a few points could have the opposite effect, especially when the conventional wisdom on midterm elections is already bleak for the party.

3. Party involvement (or lack thereof) matters. Party leaders made little effort to consolidate the 10-person Democratic field. In the end, Democrats were locked out of the race entirely, with Sanchez falling just a few hundred votes short of a top-two finish and a spot in the runoff. Vote-scattering among the other candidates played a major role; the seventh-best performing Democrat, an unknown candidate named Manuel Richard Salazar, won 1,119 votes, three times more than the gap between Sanchez and second-place finisher Ellzey.

On the Republican side, the major players stayed out of the race until the very end, when former president Trump was coaxed off the sidelines by the Club for Growth and endorsed Wright.

We won’t know just how dispositive Trump’s endorsement really is until Ellzey and Wright go head-to-head in the runoff. 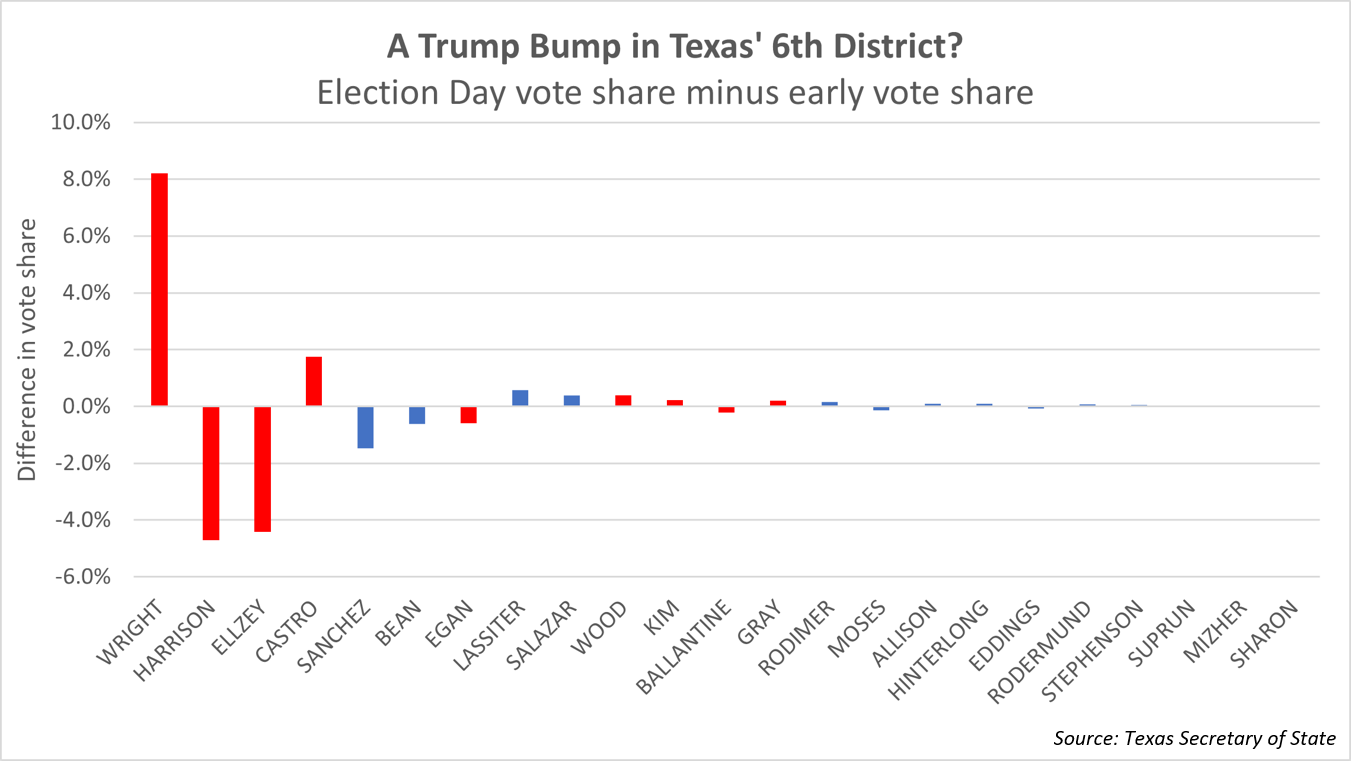 But what we do know is that Wright’s share of the Election Day vote (which came after Trump’s endorsement) was 8 points higher than her share of the early vote (which came before Trump’s endorsement), while Ellzey’s Election Day share was 4.4 percent lower than his early vote take. And former HHS chief of staff Brian Harrison, who tied himself most closely to Trump of any of the top GOP candidates, saw his Election Day share drop 4.7 percent.

None of the 20 other candidates saw shifts of that degree. The only other candidates whose Election Day share was even 1 percent different from their early share were Sanchez (-1.5 percent) and Republican John Anthony Castro (+1.8 percent).

4. Anti-Trump Republicans have their work cut out for them. In the lead-up to the special election, many national media outlets wrote about the candidacy of Michael Wood, a Marine veteran running an explicitly anti-Trump campaign. Prominent Trump critic Rep. Adam Kinzinger of Illinois endorsed him. Reps. Liz Cheney of Wyoming and Anthony Gonzalez of Ohio, who both voted to impeach Trump, contributed to his campaign. Despite all that, he placed ninth overall, with just 3.2 percent of the vote. Wood never stood much of a shot, but his poor showing in a district that — at least on paper — soured significantly on Trump between 2016 and 2020, is a sign that an anti-Trump message still appeals to just a small slice of the GOP electorate.

5. Blue Texas is still a ways away. Suburban districts such as the 6th are the reason why Democrat Beto O’Rourke nearly toppled Ted Cruz in 2018’s Senate race, and why Biden had the best performance of any Democratic presidential nominee since Jimmy Carter in the Lone Star State. But as fast as the suburbs are moving leftward, they need to move more leftward still for Democrats to actually start winning the state (especially if the GOP can form a real foothold in the Rio Grande Valley). Democrats need to be winning districts like this one, not just keeping them close, if they want to turn Texas blue. That the 10 Democrats combined for just 37 percent in this race after Biden won 48 percent last year is a sign that they’re not there yet, and that it’ll take work — the kind of work that the party chose not to put into this race — to make Blue Texas a reality.

6. Special elections remain special. This was a jungle primary special election on a Saturday in May that featured 23 candidates. As tempting as it may be to restructure one’s entire view of the 2022 midterms around this race, it would ultimately be shortsighted. Saturday was certainly a good day for Republicans, who can rest easy knowing that the district will remain in GOP hands, and it’s a disappointment for Democrats, both those who want to win in Texas and those who warned that a lockout  was possible. But like all special elections, the outcome was a reflection of the unique circumstances of the place and time, and will be best viewed in the aggregate.

Had Sanchez won 355 more votes, or Ellzey won 355 fewer, the “narrative” would be completely different. That’s a lot of power — too much, likely — to give 355 votes on a Saturday in Texas.

This story first appeared in InsideElections.com on May 3, 2021.