As a presidential battleground with multiple hot House races and a competitive Senate contest, Texas is a legitimate part of the 2020 conservation. Now there’s another way to analyze Texas’ state of competitiveness.

In 2018, Inside Elections revealed two of our new statistics: Baseline and Vote Above Replacement (VAR).

Baseline captures a state or congressional district’s political performance by combining all federal and state election results over the past four election cycles into a single average. After the midterms, we rolled out Baseline at the state-level for all 50 states.

While Baseline can be calculated at the state level, it can also be calculated for individual congressional districts. We are excited to start rolling out Baseline statistics at the district level, and to start, we are releasing Baseline by district for Texas.

Republican-Leaning Districts
One key takeaway from Texas Baseline by district is that a clear majority of districts lean Republican. Of the state’s 36 congressional districts, 25 have Republican Baselines, which makes sense since Texas has been a Republican-leaning state over the last five decades (the state’s Baseline is R+14.47). 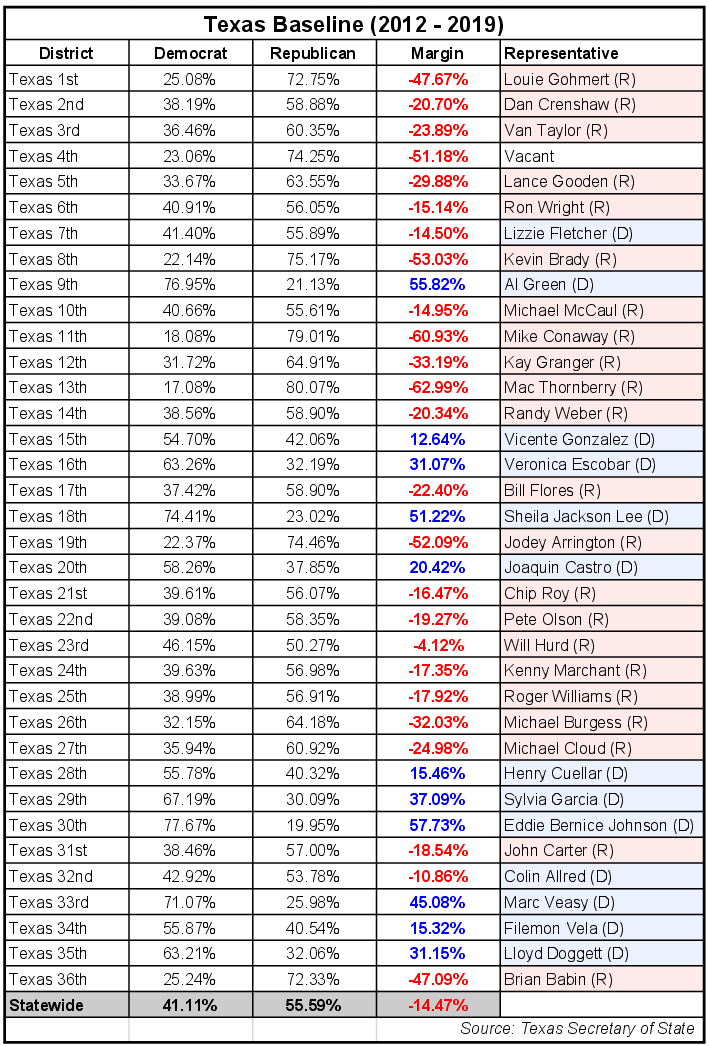 Democratic Gains in the Suburbs
Another key takeaway is that Democrats have recently made rapid gains in several Republican-leaning suburban districts. In 2018, Democrat Beto O’Rourke lost the Senate race by 2.57 percentage points, outperforming Texas’ Baseline margin of R+14.47 by 11.9 percentage points.

It is clear that these districts have rapidly evolved from heavily Republican districts in the Obama era to swing districts in the Trump era. Moving forward, it will be interesting to see if Democratic gains in places like these continue, especially if President Donald Trump loses re-election.

After the 2020 elections, each district will have a new Baseline, which should make those shifts easier to identify. And we’ll roll out Baseline for districts in other states before and after November.

This story first appeared in InsideElections.com on October 12, 2020.