Most people in politics are intensely focused on President Donald Trump’s polling numbers in battleground states or the latest horse race numbers in the fight for the Democratic presidential nomination. For those of us in the CMAG group at Kantar, it’s that time of the election cycle when everyone is asking us for our number – how much is going to be spent on advertising during the 2020 cycle.

Media companies and the Wall Street analysts that cover them are also focused on predicting how much will be spent on political media during the impending election.  And, there are some eye-popping numbers out there. In a Wall Street Journal article, forecasters at ad buying firm Group M estimated that $10 billion would be spent during the 2020 election cycle while PQ Media pegged the number at more than $8 billion in a report flagged by industry newsletter, Spots and Dots. At Kantar, we also expect a year where spending will flow - but not by nearly as much as other sources expect.

Factors to Consider
There can be little doubt that 2020 is set to be a record year (most are) for political ad spending and digital is poised to grab an increased share of that spend. Democrats are fired up, President Trump is aiming to bank a billion dollars for his re-election campaign, and campaign managers who grew up on digital will be in charge of many campaigns. Still, most estimates of political ad spending are wildly exaggerated. Many of these estimates simply inflate previous studies that implausibly showed more money spent on political ads than was raised and spent on all items in all political campaigns. Consequently, these high baselines lead to new estimates that assume advertising alone in the upcoming year will attract more spending than is likely to be raised and spent on all campaign activities in the current election cycle.

The truth is that politics is not the most transparent business in the world and that we have limited visibility into some major areas of campaign spending.  Still, although there are some significant unknowns in answering these questions, objective data and informed extrapolations from a variety of sources can provide some guidance.

You Can’t Spend What You Don’t Have
Let’s start with what is the most important number to come up if you want to know “the number” -- the amount likely to be raised and spent in the 2020 cycle. The best source on how much is raised and spent in politics on federal campaigns comes from the folks at The Center for Responsive Politics. The table below shows their estimates for the six federal election cycles including the last three presidential election years.  Figures include all spending by all advertisers, including primaries as well as election contests for all participating campaigns.

There are hundreds of other local and state races, referendums as well as other political battles and spending on federal races obviously does not comprise all political spending. That said, in mid-term years, with nearly 40 governors’ races taking place alongside battles for state legislatures and other state offices, federal spending still comprises over two-thirds of all political spending. In a presidential year, when the race for the White House is added to the federal side of the ledger and there are only 11 Governor’s races, the share comprised of federal spending tends to be close to 90 percent. And when it comes to spending on media, federal races tend to comprise an even greater share.

How much then is likely to be raised in 2020? Money raised depends on enthusiasm (or anger) and the number of competitive races. Enthusiasm and anger are certainly in place this cycle, but the playing field when it comes to House and Senate races is likely to be much smaller than it was in 2018. Although it is early, Nathan Gonzales at Inside Elections is estimating that there will be fewer competitive House and Senate races in 2020 vs. 2018.

Still, let’s make a very aggressive assumption and assume that the fever pitch continues when it comes to Congressional elections and that the nearly 40 percent increase that we saw from 2016 to 2018 in Congressional spending remains baked in yielding a total of $5.7 billion in Congressional spending. Again, we think this is an aggressive number and we think it more likely that we see a decrease along the lines of what we saw from 2006 to 2008, when fewer seats were in play after a big Democratic year and Democratic donor enthusiasm flowed to the presidential primaries and presidential general election.

Again, this is our estimate for total spending in 2020. For the $10 billion political advertising spending number making the rounds to be correct, not only would fundraising records need to be shattered, but campaigns couldn’t spend a single cent on anything but advertising – so no direct mail, polls, planes, offices, salaries, chairs, or even a single slice of pizza.

After all that wind-up, what is our number for political advertising? Although there is significant variance in campaigns, approximately 60 percent of campaign budgets flow to paid message delivery. This gives us an estimate of $6 billion in ad spending. With more campaign managers being digital natives, we see a significant increase in the share targeted toward digital in 2020, with it receiving 20 percent of the total or $1.2 billion. Digital can encompass a wide variety of different tools and tactics. In this report, we are estimating spending on paid digital or ads delivered by a platform that are sponsored by a candidate or campaign. We estimate broadcast and cable television remaining strong with broadcast attracting $3.2 billion and cable attracting $1.2 billion. We see radio getting $400 million. The estimate on radio spending is new but comparing this to 2016, Broadcast TV tallied $2.85 billion, cable had $800m and digital (paid media only) we estimated was ~$700-800m. 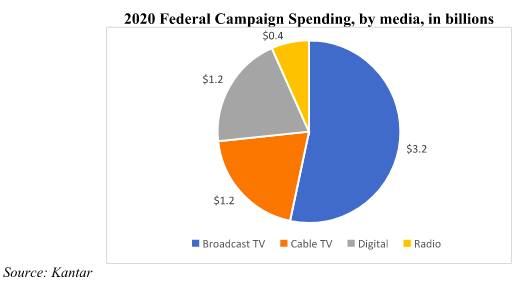 Other Considerations for Paid Media
Some are saying that a long drawn out Democratic primary will increase media profits.  We respectfully disagree. An extended Democratic primary fight would likely be a short term, second quarter 2020 sugar high.  In fact, a long primary and a Democratic convention fight would most likely reduce total campaign spending as it would reduce the amount of time the eventual Democratic nominee and his/her allies would have to raise and spend money in the general election. It would also likely create challenges for Democrats raising money for Congressional races if the nomination fight gobbled up most of the political enthusiasm oxygen.

We’re paying a lot of attention to national advertising. In 2016, 30 percent of GOP presidential primary spending was on national TV as candidates tried to stand out in a crowded field and advertise on a network like Fox News that indexed well for Republican primary voters. We see a similar pattern at work in the 2020 Democratic nomination fight with national MSNBC and CNN audiences attractive for Democratic primary candidates. In the general election, we’re also keeping an eye on national broadcast and cable spending. Both Hillary Clinton and Trump spent significant share nationally in 2016 and we expect to see this trend continue in 2020.

Facebook and Google together capture about 60 percent of the digital ad market and extrapolating from their publicly released numbers will allow us to track this category in 2020.  Still, like most political advertising, digital spending comes late and we may not know results until the election is upon us.

One thing we do know is that at this early stage of the campaign, the incumbent President and a good number of his Democratic challengers are very active on Facebook. Some of this might have to do with the attempts by the two dozen Democrats to reach the minimum polling and individual donor requirements to be amongst the twenty candidates to get on the debate stage in Miami in late June. Reports have surfaced that some candidates were engaging voters on Facebook before they’d even hired for key positions within their campaign.

Facebook spending thus far dwarfs the TV spend but that’s not a terribly unusual thing in our view given where we are in the campaign and how good Facebook is for helping candidates organize, draw volunteers and raise funds.

Thus far in 2019, we’ve seen about $2.3m of TV advertising that’s already run or is slated to be run in the future. That group of advertisers is led by Tom Steyer’s Need to Impeach and not by any individual candidate. Those ads are running on a combination of national cable networks or in local markets in early primary/caucus states. The candidate with the most TV spending to date is former Maryland Rep. John Delaney who’s spent a little over $600,000 trying to introduce himself to voters in both Iowa and New Hampshire.

By contrast, in the last 90 days, Donald Trump and his allies have spent nearly $3 million alone on Facebook. The top five Democratic contenders (Joe Biden, Bernie Sanders, Elizabeth Warren, Pete Buttegieg and Kamala Harris) have combined to spend a bit more than $4.5 million. None of these candidates have aired a single television ad.

Another area of emerging focus in the 2020 election cycle is the Over-the-Top/Connected TV space. The issues of scale that hindered the use of this platform in previous cycles is now being addressed but isn’t totally behind us. But, his universe has certainly expanded beyond what’s been available historically through D2 and Comcast’s VOD. As an example, Roku has now hired its first direct sales resource in the DC market and plans a full assault on ad budgets; Premion, an extension of TEGNA, was selling in the 2018 cycle. The ability of political advertisers to air more spots on these platforms will allow them to extend the reach of their messaging and target younger audiences. There’s some disagreement in the agencies about where the budget for OTT/CTV derives. Not surprisingly, the digital shops see it coming from the linear TV budget while the TV buying agencies see the budget coming out of the digital line. No matter where the budget comes from to support it, we see strong growth.

Wait and See
Super PACs also need to be considered and are a big question mark. Not only do the unlimited way they can raise money add to the overall total, but they pay a premium for television advertising since they do not qualify for lowest unit rate. Will Democrats use Super PACs in 2020? So far, most in the primary have rejected this sort of support. Will well-heeled Republicans support President Trump? As we already know, the Koch brothers have once again opted out of the Presidential race. The NRA also threw its support behind President Trump in 2016 but how much of a role will its current financial dilemma play in its ability to repeat that support in the next 18 months?

Given the legislative gridlock, we see little potential for large advertising campaigns (like ones we have seen around health care or gun control legislation) popping up in the latter part of 2019 or into 2020. The only exception would be if impeachment proceedings start or if there is a Supreme Court opening.

With many ups and downs already occurring in a race that’s still over a year away, just one thing is sure – we will all be at the edges of our seats waiting to see what’s next. As always, the CMAG group at Kantar will be monitoring advertising on a daily and hourly basis throughout the election season, so stay tuned to find out what will happen.

This story first appeared in InsideElections.com on June 26, 2019.