Massachusetts Redistricting: A Common Story in the Commonwealth

Democrats are poised to take over the governorship of Massachusetts from Republicans and will likely hold all of the Bay State’s U.S. House seats, yet potentially lose control of Congress.

The Massachusetts congressional map received minimal modifications in redistricting. Not only will the state keep its nine seats, but those districts will mostly resemble the current map. Republican Gov. Charlie Baker signed off on the new lines in November after the plan cleared the state Legislature.

All nine congressional districts in Massachusetts are overwhelmingly Democratic, preferring the party by around 20 points on average, according to calculations by Inside Elections. In the 2020 presidential election, Joe Biden would have carried the districts over President Donald Trump by a median margin of 29 points under the new map, similar to his median lead of 28 points under the current map.

Massachusetts has not elected a Republican to the House since 1994, and none of its redrawn districts look to be very competitive in 2022. All nine Democratic incumbents are well-positioned for re-election. 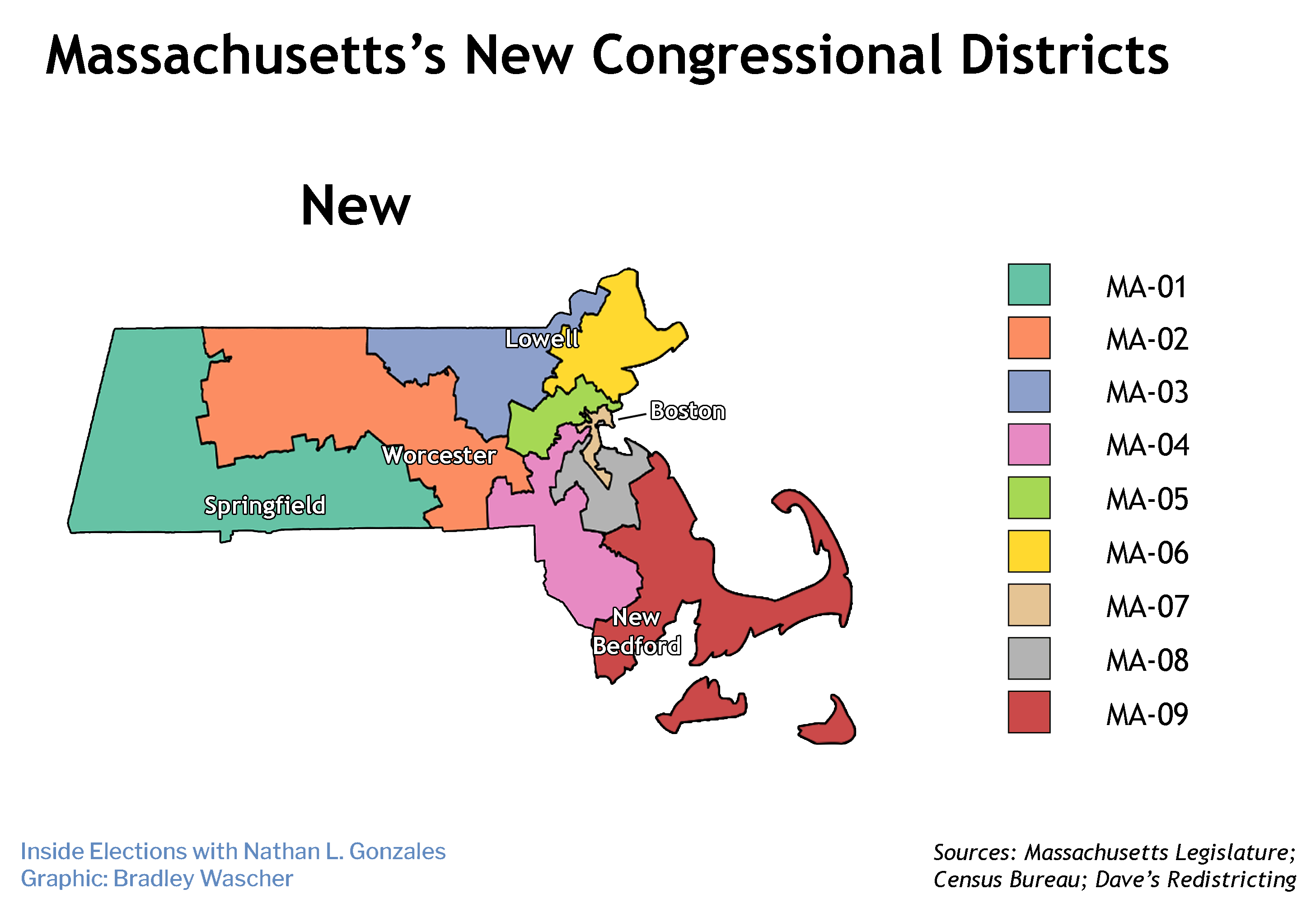 1st District
The 1st, Massachusetts’s westernmost district, contains Springfield. It remains heavily Democratic: according to a composite of 11 statewide and federal elections in Massachusetts between 2014 and 2020 calculated by Inside Elections, the 1st preferred Democrats by an average margin of 17.6 points. Biden would have carried the district by 22 points in 2020. Democratic Rep. Richard Neal is in no real danger — especially without a well-funded primary challenger to worry about this time. Initial Rating: Solid Democratic.

2nd District
Located in the western and central parts of the state, including Worcester, the 2nd is a bit more compact compared to its current configuration. But not much else has changed, which is good news for Democratic Rep. Jim McGovern. The district preferred Democrats by an average of 19.9 points in the composite of 2014-2020 elections, and Biden would have won by 30 points in 2020. Child care center owner Jeffrey Sossa-Paquette was the best-funded Republican in the race on December 31. Solid Democratic.

3rd District
The 3rd is located in northern and central Massachusetts and contains Lowell and Lawrence. Under the new map, the district trades area in Andover for much of Billerica in the east, while also exchanging portions of Westminster and Winchendon in the west. The 3rd had an average partisanship of D+16.5 in the 2014-2020 composite, and it would have voted for Biden by 27 points in 2020. Democratic Rep. Lori Trahan seems set; on the Republican side, former state Sen. Dean Tran is running. Solid Democratic.

4th District
The 4th covers many of the suburbs west of Boston, beginning in Brookline and Newton, and continues south toward Bristol. One point of contention during the mapmaking process was the decision to move Fall River entirely into the 4th district; the current map split the city between the 4th and 9th districts, but the changes now separate it from New Bedford, another major South Coast city.
The seat is still strongly Democratic. According to the composite of 2014-2020 elections, the 4th preferred Democrats by an average of 19.1 points, and it would have voted for Biden by 28 points in 2020. Democratic Rep. Jake Auchincloss was elected in 2020 after Rep. Joe Kennedy gave up his seat to run for Senate, and the freshman is well-positioned for a second term — though his path could be more complicated if progressive Jesse Mermell, who narrowly lost the 2020 Democratic primary, decides to run again. A number of Republicans in the field, including businesswoman Emily Burns and 2020 nominee Julie Hall, have already withdrawn. Solid Democratic.

5th District
The 5th contains suburbs north and west of Boston, including Medford and Sudbury.

Compared to the current map, the district loses Southborough, Ashland, Sherborn, and Holliston, while seeing other changes around Cambridge, Revere, and Wellesley. Democratic Rep. Katherine Clark faces no serious challenge in this Biden+51 seat: the 5th voted for Democrats by an average of 38.7 points in the composite of federal and statewide elections. Solid Democratic.

6th District
The 6th is Massachusetts’s northeasternmost district, containing Lynn and Salem as well as much of the North Shore. The district saw few changes apart from trading land between Andover and Billerica.

The 6th District has hosted two of the most exciting general election House races anywhere in Massachusetts in recent memory. In 2012, GOP state Sen. Richard Tisei (who is one of the few openly gay Republicans to run for Congress) nearly defeated embattled Democratic Rep. John Tierney, 48 percent to 47 percent, while President Barack Obama won the district by 11 points. Two years later, the race got more interesting when Seth Moulton defeated Tierney in the Democratic primary and Republicans thought they had a legitimate shot at winning the open seat with Tisei running again. A majority of public polls showed Tisei with the lead. But in the end, Moulton won by 14 points.

Fast forward to today, the newly-drawn 6th had an average partisanship of D+16.1 in the election composite, and it would have preferred Biden by 28 points in 2020, meaning the excitement is probably over and Moulton is well-positioned to win his fifth term. Solid Democratic.

7th District
The 7th District covers many areas in and around Boston, including Cambridge, Somerville, and Chelsea, while extending as far south as Randolph. The district preferred Democrats by an average of 62 points, making it the most Democratic-leaning district in Massachusetts. Biden would have won by 70 points in 2020, and Democratic Rep. Ayanna Pressley should have no problem in 2022. Solid Democratic.

8th District
The 8th primarily comprises cities and suburbs south of Boston, such as Quincy and Brockton. The district’s reach into Boston has been redrawn slightly, and it saw a few other reconfigurations around its southern border with the 9th District. But it remains very favorable for Democratic Rep. Stephen Lynch. The 8th preferred Democrats by an average of 26.7 points in the election composite, and it would have voted for Biden by 38 points in 2020. Solid Democratic.

9th District
The southeasternmost district in Massachusetts, the 9th, contains much of the South Shore as well as Cape Cod. Although it loses the South Coast city of Fall River to the 4th District, the district otherwise saw few changes. In 2020, Biden would have carried the 9th by 18 points, meaning it is the least Democratic-leaning district in the state. But that isn’t saying much in Massachusetts: the seat still has an average partisanship of D+8.2 in the composite of elections, and Republicans haven’t won this seat since 1960. Democratic Rep. Bill Keating should be able to keep any potential challengers at bay. Solid Democratic.

This story first appeared in Inside Elections with Nathan L. Gonzales on April 14, 2022.