It was never supposed to be this difficult.

Following the 2020 Census, New Hampshire was apportioned two congressional districts: the same number it has had since 1883.

But after Republicans were unexpectedly swept back to full power in the state legislature in the 2020 elections, what appeared to be a straightforward task devolved into the longest-running redistricting battle of the cycle.

On two separate occasions, GOP mapmakers in the state legislature passed a congressional map that would have radically altered the status quo of two competitive districts, in favor of shoring up one district for Democratic incumbent Annie Kuster, while imperiling Democratic Rep. Chris Pappas by making the other district significantly more Republican.

The first proposal would have broken the east-west tradition by wrapping the western district south along the state’s eastern border all the way to Dover, turning it into a reliably Democratic seat but making the eastern seat much more Republican.

The second proposal would have shifted Manchester into the western district, to the same effect.

GOP Gov. Chris Sununu refused to sign either plan, instead offering his own proposal that the legislature never acted upon.

Ultimately, the state Supreme Court was forced to step in and draw its own map. The result was a map of least change, with just a few thousand residents and five towns shifting from the 1st District to the 2nd District to balance the districts’ populations

The overall partisanship of the two seats is also unchanged. Both seats are competitive but slightly favor Democrats. New Hampshire has been known to flow with the wave of a cycle. In 2006, Democrats took over both House seats. And in 2010, Republicans took both seats back.

With New Hampshire complete all 50 states have a congressional map in place for 2022 (though a federal judge just rejected Louisiana’s map, a decision now on appeal). 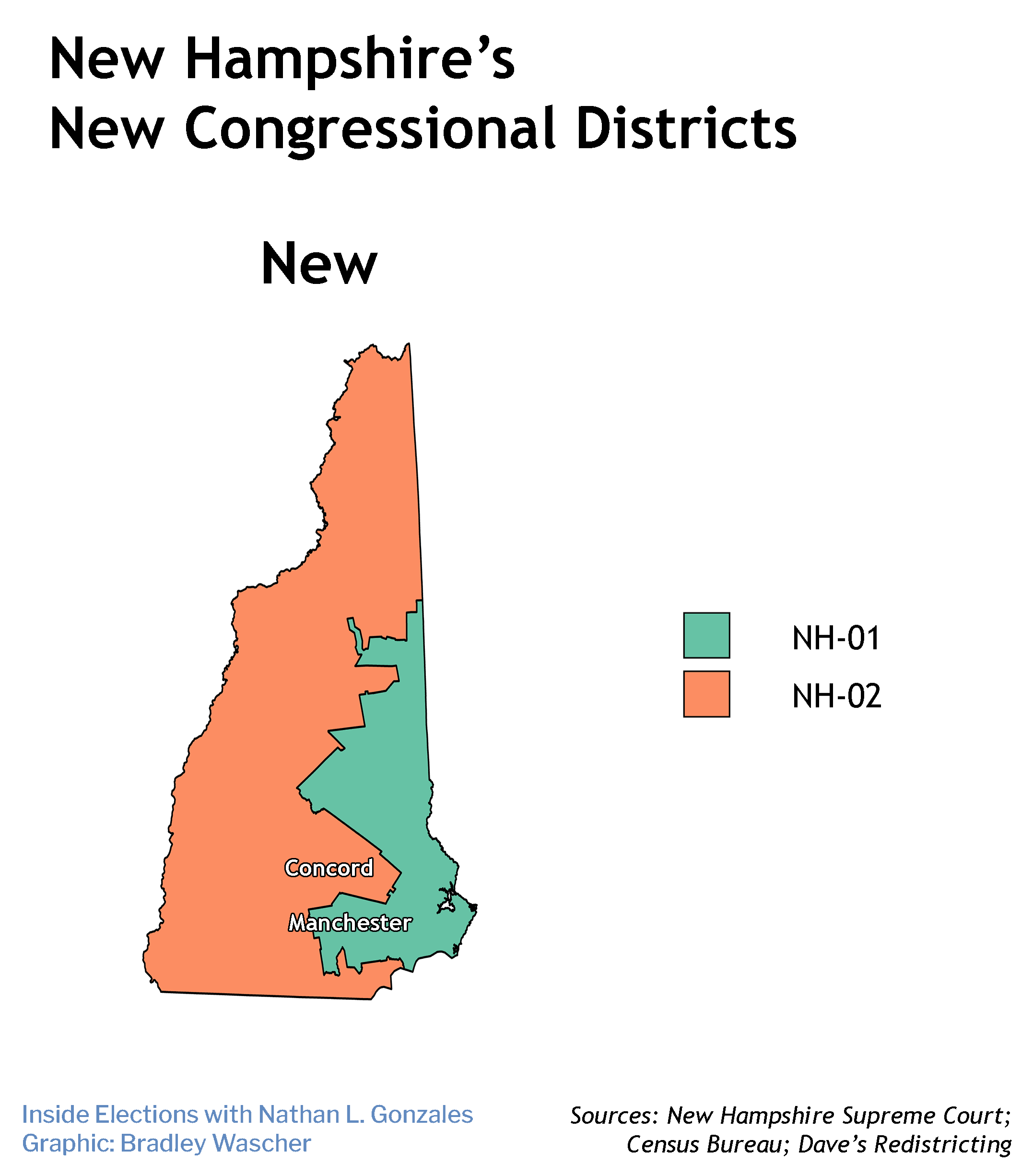 1st District
The 1st, currently represented by two-term Democrat Pappas, was at the center of the fight between Sununu and the GOP-controlled state legislature. The 1st has been the more competitive of New Hampshire’s seats for the past decade; GOP mapmakers hoped to make Pappas even more vulnerable, even at the expense of forfeiting any real chance at the 2nd District.

Sununu, on the other hand, hoped for a map that would give Republicans a good shot at sweeping both seats in the fall.

Under the map approved by the state Supreme Court, the 1st remains an eastern district, anchored by Manchester. In order to meet its target population, the 1st had to shrink by roughly 9,000 residents.

To that end, it surrendered five towns — Jackson, Albany, Sandwich, Campton, and New Hampton — to the 2nd District.

A crowded field of Republicans are vying for the chance to take on Pappas, who won his first election in 2018, 54-45 percent, and re-election in 2020 by a narrower 51-46 percent margin.

Former state GOP executive director Matt Mowers, who was the party’s nominee in 2020, is running again. As is state Rep. Tim Baxter, who has support from the party’s libertarian wing including Kentucky Sen. Rand Paul; former Trump campaign staffer Karoline Leavitt, who has backing from Trump-world figures such as Sean Hannity as well as from House GOP Conference Chairwoman Elise Stefanik; Gail Huff Brown, a former news anchor and the wife of former Massachusetts Senator/2014 New Hampshire U.S. Senate nominee Scott Brown; and former Executive Councilor Russell Prescott. Some GOP strategists would prefer Mowers — who was endorsed by House Minority Leader Kevin McCarthy — or Brown to Baxter or Leavitt.

Pappas begins the race with a handful of advantages. The partisan lean of the district is still in Democrats’ favor, if just slightly. New Hampshire holds one of the latest primaries in the nation, on Sept. 13, so the large GOP field will be more focused on each other than they will on the incumbent for the next several months. And once Republicans do select a nominee, that person will likely have spent most of their cash and will have just five weeks to run a general election campaign. Pappas, on the other hand, had $1.8 million in the bank on March 31 and is already in general election mode. Initial Rating: Tilt Democratic.

2nd District
The 2nd picks up those five towns and 9,000 residents from the 1st District, and is otherwise unchanged.

That’s not bad news for Kuster, who has held the seat since 2012, most recently winning by 10 points in 2020 over repeat GOP nominee Steve Negron.

The GOP field is still taking shape, as many potential candidates were waiting to see if this district would become significantly more Democratic.

The highest-profile candidate thus far is George Hansel, the mayor of Keene (pop. 23,047) who secured a coveted endorsement from Gov. Sununu shortly after entering the race at the end of May. Former Hillsborough County treasurer Robert Burns is running (he defeated 1st District Rep. Pappas, 58-42 percent, for the treasurer position in 2010), as is Lily Tang Williams, who won 3.6 percent of the vote as the Libertarian nominee for Senate in Colorado in 2016.

Kuster had $2.4 million in the bank on March 31 and Republicans won’t know their nominee for another three months. Likely Democratic.

This story first appeared in InsideElections.com on June 7, 2022.