With a slew of potentially poll-moving campaign events on the horizon, now is a great time to freeze-frame and look at the state of the presidential race.

Here’s what that Snapshot tells us: across a collection of 24 national polls released over the past two weeks, Joe Biden led Donald Trump by an average of 8.4 points (49.3 percent to 40.9 percent). 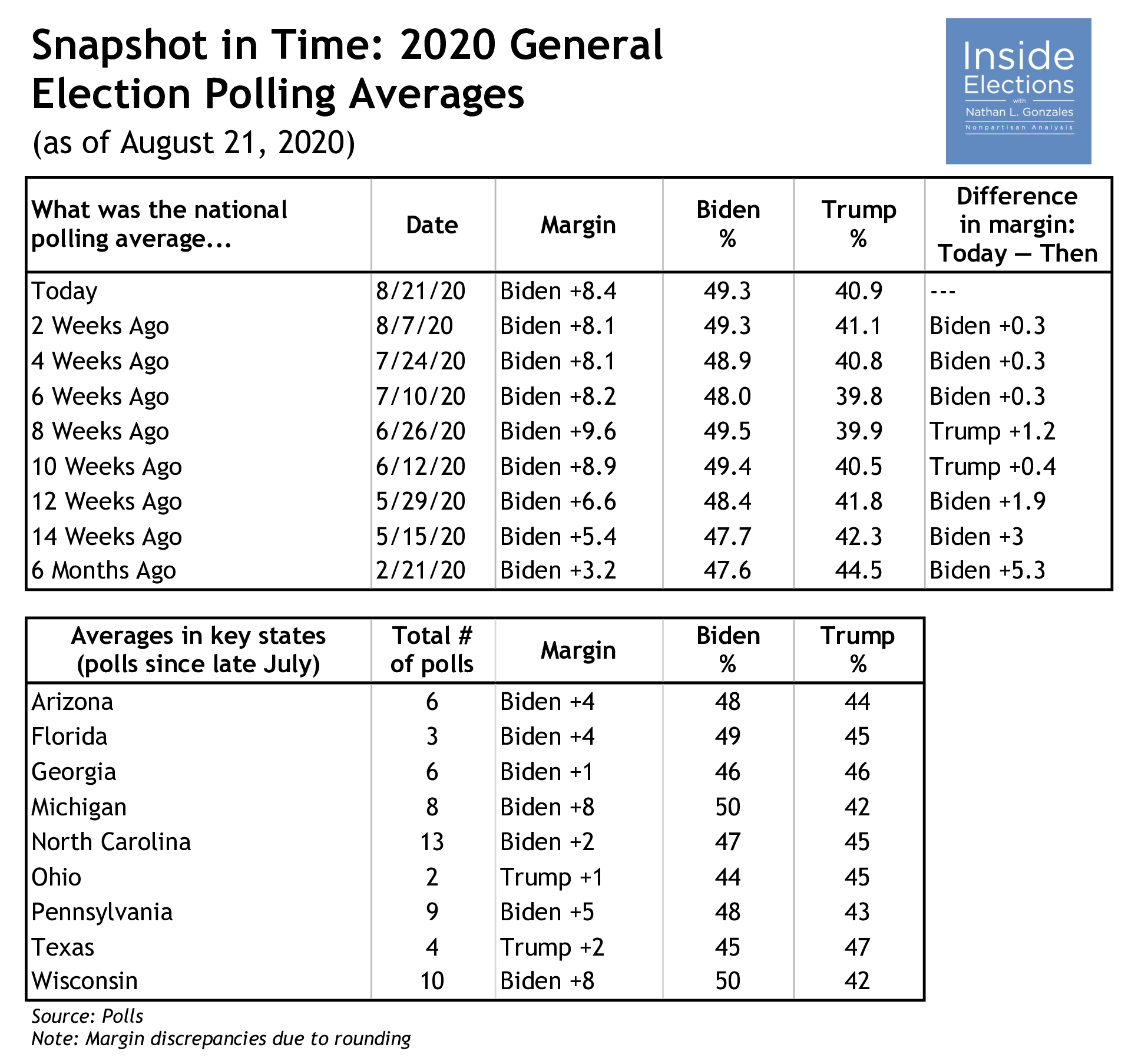 It’s no secret that this campaign has produced steady polling numbers, especially over the past six weeks. Indeed, in daily Snapshots since early July, Biden’s average margin over Trump has never exceeded 8.6 points, nor has it fallen below 7.7 points. The former vice president’s June jump has all but ended.

So for those wondering how the race might shift after the Democratic National Convention and Republican National Convention, this 8.4-point topline is a solid reference point. Any convention-related bump — temporary or otherwise — will be easily detectable and likely attributable to the virtual theatrics (and interesting performances).

Many pollsters recognize this and are understandably waiting for the conventions to end before re-entering the field in full force. That’s reflected in the pool of new polling — 121 state and national surveys came out in the two weeks preceding the August 7th Snapshot, while “only” 81 new polls were released to inform this installment.

For that reason, it’s all quiet on the polling front...for now.

States
Although the well of fresh polls has run dry over the past two weeks, there is a bit of good news to whet your polling appetite: enough state-level surveys are finally being released to aggregate and analyze patterns. In other words, it’s time for some (very early) trend analysis.

When comparing national polls to state polls, one standout theme is that the ebb-and-flow nationwide has not been fully present in the battlegrounds — in many cases, we aren’t seeing much of a uniform shift. 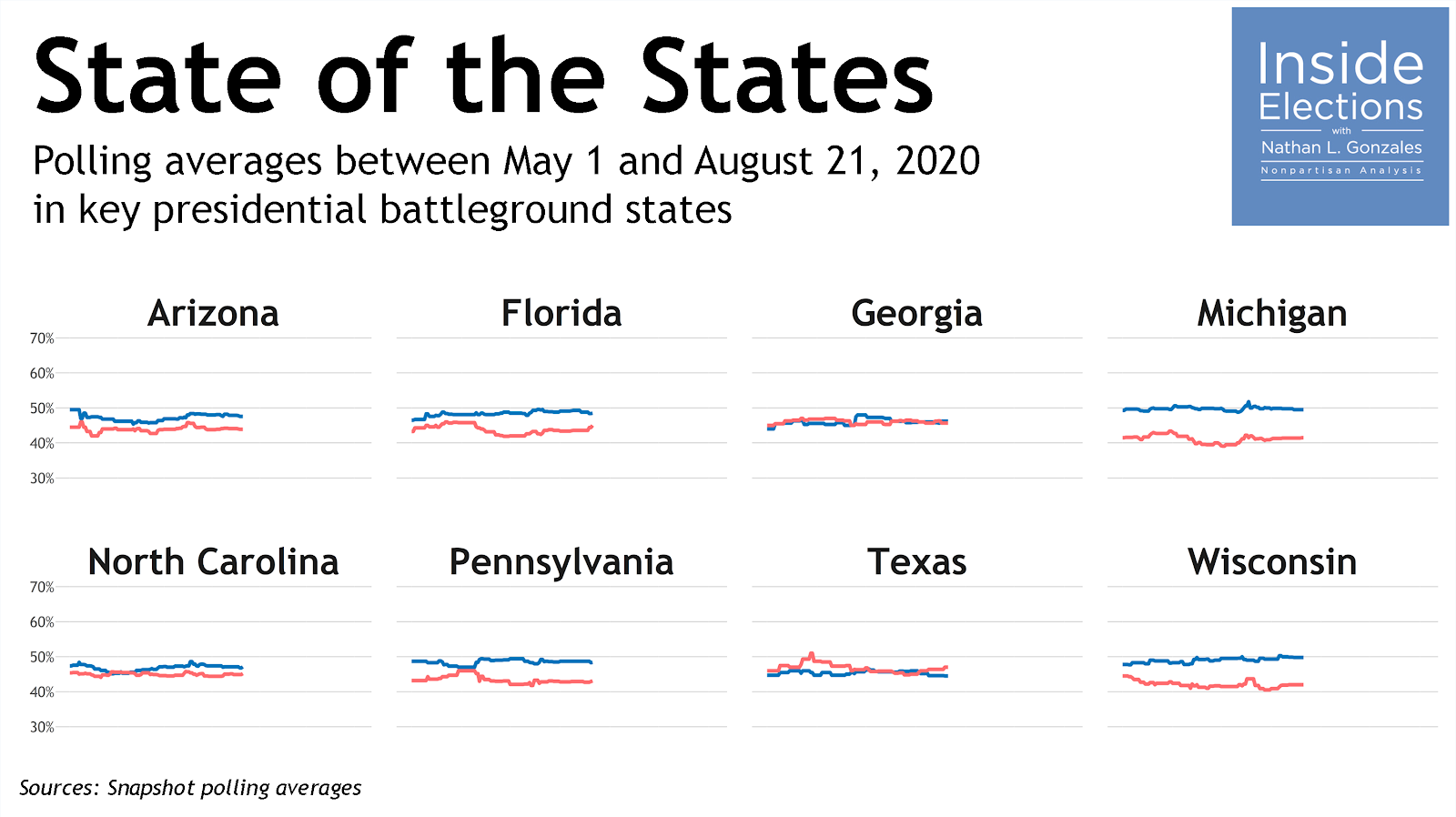 One reason could be a lack of data, as some of these averages incorporate only six or seven polls for any given day. A second explanation might simply be that not all polling shifts are uniform; it makes sense that different states move at different rates.

That said, the margin in certain battlegrounds, such as Georgia or Texas, undoubtedly improved for Biden as the summer went on. The former vice president’s numbers in Florida and North Carolina also gained noticeably throughout June. But even in the states with more stochastic trendlines, today’s Snapshot suggests a worrying map for President Trump.

Other potentially competitive states still lack a regular flow of sufficient data. But based on the polling available, Iowa and Ohio (both of which are rated Tilt Republican) appear to fall ever-so-slightly in favor of the president: the latest Iowa Snapshot showed Trump +1.5 and the Ohio Snapshot found Trump +0.7. We will be watching to see how these scores change as the conventions pass, Labor Day nears, and the campaign kicks up.

This story first appeared in InsideElections.com on August 21, 2020.