Last November, just 11 states elected a governor. And perhaps unsurprisingly given the slate of states, almost every race was uncompetitive, with all but one (North Carolina) decided by at least ten points. Despite such wide margins, though, it would be incorrect to say that 2020’s gubernatorial elections were boring. According to Vote Above Replacement (VAR), some candidates — particularly Republican incumbents running in deeply Democratic states — successfully broke the mold and defied partisan expectations.

VAR measures the strength of a political candidate relative to a typical candidate from their party within the same state. That initial benchmark is derived using Inside Elections Baseline, which captures each party’s political performance in a state or congressional district by combining all federal and state election results over the past four election cycles into a single average.

The VAR scores for gubernatorial candidates played out mostly as anticipated. The average VAR across November’s 11 races was just -0.45: put another way, when one candidate exceeded their benchmark, their opponent often fell short by a similar amount. The average absolute VAR, by contrast, was 6.6, meaning each politician usually performed 6 points better — or worse — compared to a typical candidate from their party in that state.

By far, the highest VAR this cycle (of any candidate for president, Senate, or governor) belonged to Republican Gov. Phil Scott of Vermont. Scott cruised to a third two-year term with 68.5 percent in November’s general election, outperforming the statewide GOP Baseline of 35.6 percent — good for a 32.9 VAR. Remarkably, although Vermont’s Baseline has shifted toward Democrats by 5 points since he first won in 2016, Scott’s value relative to a typical Republican has still improved in every subsequent election: his VAR in 2018 was 19.4, and his VAR in 2016 was 12.7.

Republican Gov. Chris Sununu of New Hampshire, who begins his third term with a 72-27 job approval rating according to an early February poll from Saint Anselm College, also had a markedly above-average VAR in 2020. He outperformed a typical Republican candidate in his state by 18.1 points, even stronger than his previous two victories, where he finished with VAR scores of 6.1 in 2018 and 1.6 in 2016. All the while, New Hampshire’s statewide Baselines have barely budged within that four-year span. 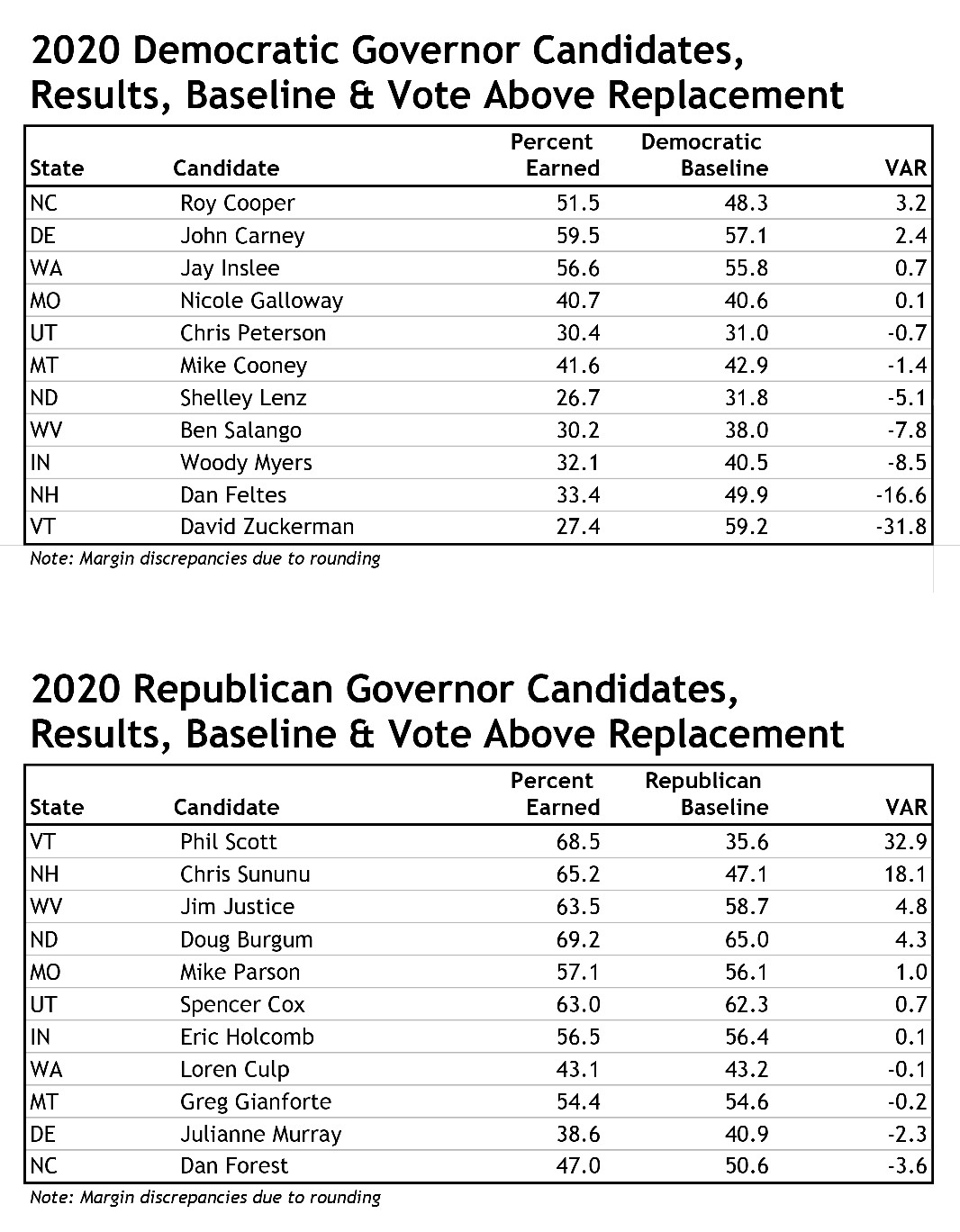 These kinds of stat lines might be enough to give Sununu the motivation to follow in the footsteps of previous multiple-term Granite State governors such as Jeanne Sheehan and Maggie Hassan and run for a seat in the United States Senate, rather than try for another two-year term as governor in 2022. While Sununu has largely kept mum amid speculation over which office he’ll eventually seek next cycle, if he were to switch his sights to the Senate (a possibility he hesitantly acknowledged in a Sunday interview with WMUR), he would almost definitely face Sen. Hassan in the general election. Per the same Saint Anselm College poll, 39 percent of New Hampshire registered voters said Hassan deserves re-election, whereas 47 percent would instead want to “elect someone new.”

But even disregarding his potential opponents, Sununu’s position as a popular governor wouldn’t guarantee his ticket to the Senate, especially as a member of the weaker party in his state.

Just ask former Montana Gov. Steve Bullock. Although Bullock ran ahead of a typical Democrat by 6.1 points in his 2016 re-election campaign for governor, he ultimately fell short in the 2020 Senate race. In all fairness, Montana’s Baseline drifted in favor of Republicans by 3 points between 2016 and 2020, but Bullock’s VAR last November was still only 2.1 — even controlling for the statewide shift, he did worse in his Senate run than in his governor run.

These lessons might also serve as a warning for Gov. Larry Hogan, the well-regarded Republican from Maryland who will be term-limited in 2022 and has long dodged the topic of a Senate bid. On paper, Hogan is a formidable candidate: he finished with VAR scores of 13.9 in 2014 and 19.2 in 2018, putting his second victory squarely in line with Sununu’s performance last November. But according to Baseline, Maryland has moved approximately 2 points toward Democrats since Hogan was first elected in 2014.

Therefore, if Hogan did attempt to challenge Democratic Sen. Chris Van Hollen, he’d certainly give the GOP their best hope at making this race competitive, but would nonetheless likely struggle to emerge as the favorite. And if Van Hollen finishes with a positive VAR — as he did when he exceeded the Democratic benchmark by 1.3 points in 2016 — Hogan would face an even higher uphill battle, needing to post at least a 25.6 VAR of his own to flip the seat. (For comparison, Republican Sen. Susan Collins of Maine finished with a VAR of 5.8 when she won re-election in 2020.)

The simple truth is, it’s getting harder for down-ballot candidates to break free of voters’ preferences at the top of the ticket, especially in federal elections; split-ticket voting is on the decline.

But still, governors’ mansions nationwide have long been occupied by fascinating characters and personalities who can sometimes (and somehow) cut against the grain of broader political trends. That’s why, even after voting for the Republican candidates for president, Senate, and a majority of statewide offices last November, North Carolina still elected Democratic Gov. Roy Cooper to a second term; he posted a VAR of 3.2.

So while elections have become more nationalized and polarized at practically every level, these sorts of statewide races in particular can present unique opportunities to break from the monotony, as rare as those opportunities may be.

This story first appeared in InsideElections.com on February 16, 2021.