For the first time since 1986, the president’s party netted gubernatorial seats in a midterm election, as Democrats gained three new governorships in 2022 and Republicans flipped only one. Although it wasn’t much of a surprise that Massachusetts and Maryland moved into the Democrats’ column, Arizona (another Democratic flip) and Nevada (the Republican pickup) were battlegrounds from the beginning. But one thing these contests have in common is that all four winners exceeded expectations, according to Vote Above Replacement (VAR).

VAR measures the strength of a political candidate relative to a typical candidate from their party within the same state. That initial benchmark is derived using Inside Elections’ Baseline, which captures a state’s political performance by combining all federal and state election results over the past four election cycles into a single trimmed mean. VAR is simply the candidate’s share of the vote minus the party’s Baseline. A higher VAR indicates a strong performance relative to expectations.

Across all 36 governor races in 2022, each politician performed an average of 4.7 points better — or worse — relative to a typical candidate from their party in that state. (For comparison, the same number for 2022 Senate candidates was 3.1, suggesting that the gubernatorial races were more heavily influenced by candidate quality, or less constrained by partisanship.) The average VAR among gubernatorial candidates in 2022 was also slightly lower than the 6.6 average VAR recorded post-2020, but because only 11 states held governor’s races that year, individual candidate performances had a larger effect on the overall average.

Predictably, the winning candidate had a higher VAR than their opponent in four of the five gubernatorial races rated as Toss-up by Inside Elections.

Finishing with a higher VAR than your opponent is obviously helpful for winning in any state, but especially in these two battlegrounds: according to Baseline, Arizona prefers Republicans in statewide elections by a mere 1.8 points (the slimmest margin of any Republican-leaning state) while Nevada leans Democratic by just 1.7 points (the second-slimmest of any Democratic-leaning state).

Democrats’ overperformances were crucial in other competitive races too. In Wisconsin, Democratic Gov. Tony Evers won re-election with a 1.6 VAR against construction company CEO Tim Michels (VAR -0.8), even as GOP Sen. Ron Johnson eked out a win — and his own positive VAR — elsewhere on the ballot. And maybe most spectacularly in Kansas, Democratic Gov. Laura Kelly posted a 8.1 VAR en route to her second term, leaving state Attorney General Derek Schmidt in the red (VAR: -8.8). 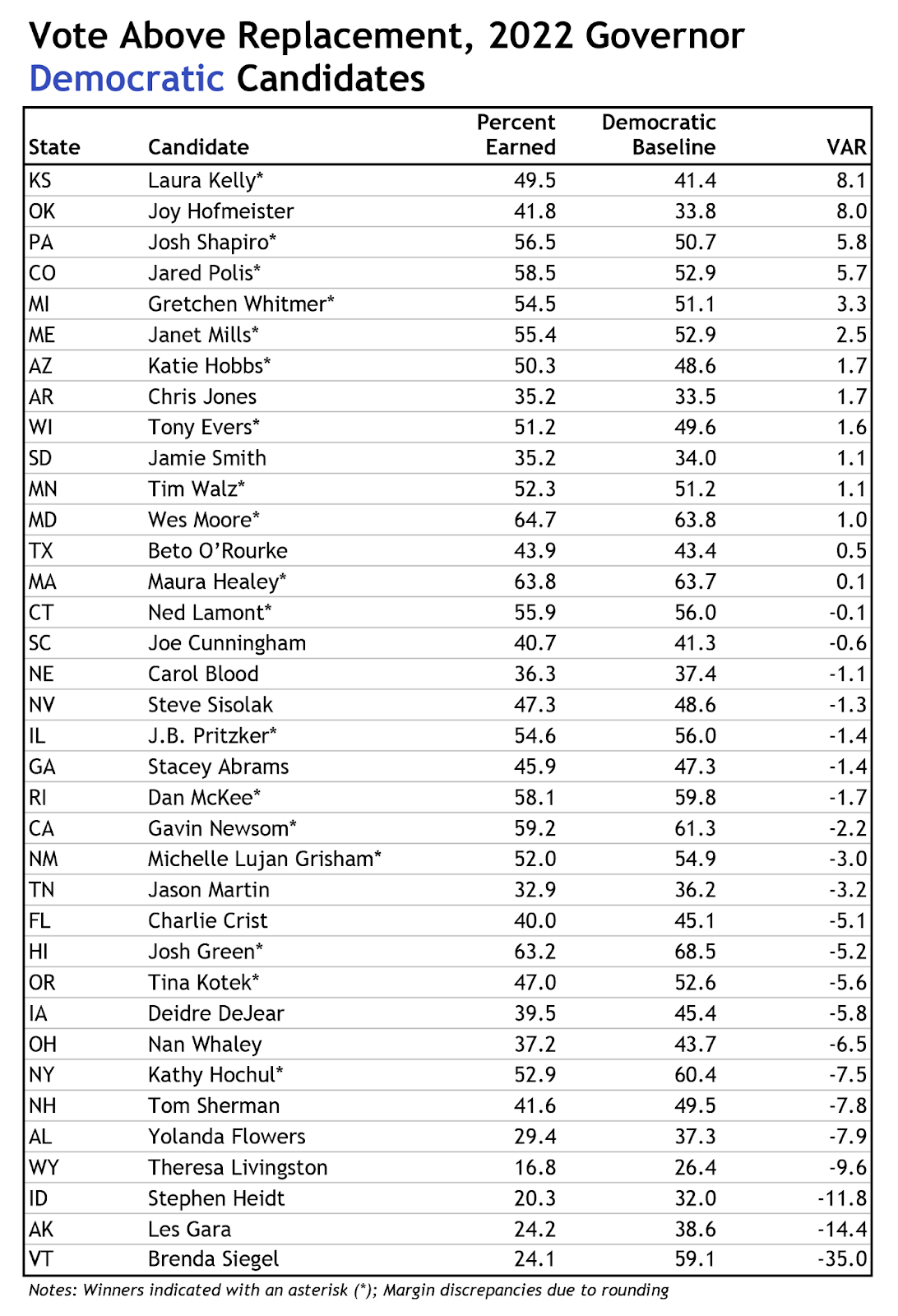 But the dynamics of the campaign were heavily impacted by independent candidate Betsy Johnson, a former Democratic state senator who finished with 8.6 percent and seemed to siphon more support away from Kotek. (The unpopularity of outgoing Democratic Gov. Kate Brown probably didn’t do Kotek many favors, either.) Independent candidates also shook things up to some degree in Alaska (where Republican Gov. Mike Dunleavy won with a -1.6 VAR) and Idaho (where Gov. Brad Little ran 3.7 points behind the typical Republican, but still cleared 60 percent).

In Pennsylvania, Democratic Attorney General Josh Shapiro was the favorite — the race’s final rating from Inside Elections was Lean Democratic. But his 14.8-point romp over GOP state Sen. Doug Mastriano was uncharacteristically lopsided for the Keystone State, and larger than most polls predicted. In VAR terms, Shapiro finished 5.8 points ahead of the typical Democrat, and Mastriano lagged 4.9 points behind the Republican Baseline.

While Republicans fell short of expectations in Pennsylvania, Democrats underperformed in New York. Democratic Gov. Kathy Hochul’s -7.5 VAR put her within 7 points of GOP Rep. Lee Zeldin, whose 9.2 VAR was the highest of any losing Senate or gubernatorial candidate in 2022.

In Oklahoma, Democratic state Superintendent of Public Instruction Joy Hofmeister recorded an 8 VAR in her challenge against Republican Gov. Kevin Stitt (VAR: -7.3). And Wyoming GOP Gov. Mark Gordon’s 8.9 VAR is particularly noteworthy considering that he won by 58.3 points, the largest margin in state history according to Ballotpedia. 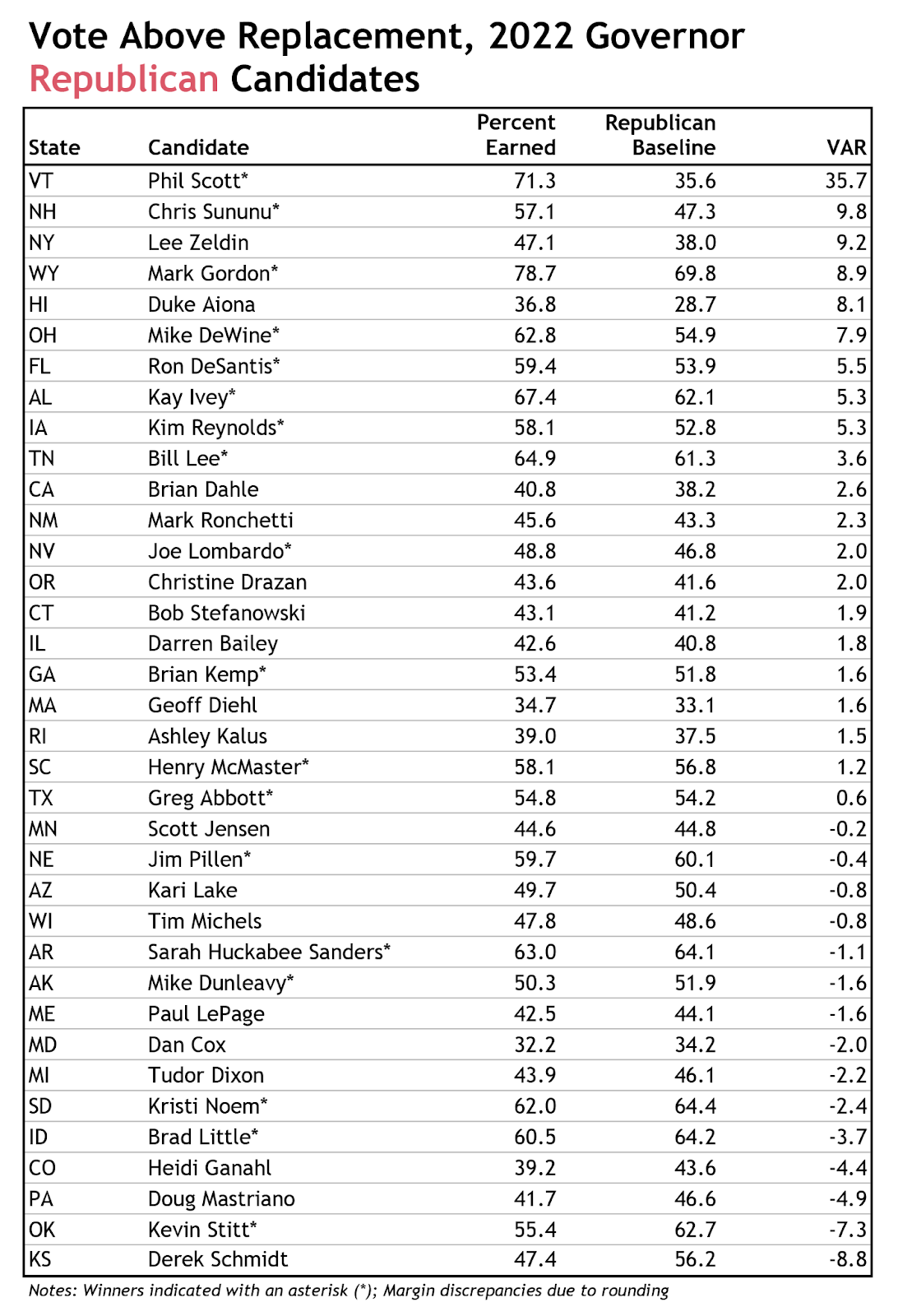 Heading into 2022, Sununu and Scott were two of four GOP governors in charge of deep blue states. But the other two didn’t run for re-election.

In Massachusetts, Republicans could no longer lean on Gov. Charlie Baker, who had finished 29.5 points ahead of a typical statewide GOP candidate in 2018. With Baker giving up the governorship to become president of the National Collegiate Athletic Association, the GOP’s baton was handed off to former state Rep. Geoff Diehl. And although Diehl finished with a positive VAR (1.6), in a commonwealth as blue as Massachusetts it didn’t save the strident conservative from losing to Democratic state Attorney General Maura Healey (VAR: 0.1) by nearly 30 points.

A similar situation played out in Maryland, where GOP Gov. Larry Hogan (who posted a 19.2 VAR in 2018) was term-limited. Republicans nominated Dan Cox, a state delegate who was endorsed by former President Donald Trump, promoted unfounded claims about the 2020 election, organized buses to the Jan. 6 rally, and spoke at a conspiracy theory conference. Cox’s controversies probably contributed to his -2 VAR, the eighth-lowest of any Republican running for governor in 2022. The winner in Maryland, author and former nonprofit CEO Wes Moore, finished 1 point ahead of the typical statewide Democrat.

VAR also shows how the same candidates have fared across multiple cycles.

In 2018, Beto O’Rourke and Stacey Abrams were both identified as potential rising stars in the Democratic Party. O’Rourke posted a 7.2 VAR in his 2.6-point loss to Texas Sen. Ted Cruz, while Abrams recorded a 3.6 VAR in the tightly contested Georgia governor race against Brian Kemp. Both Democrats sought statewide office again in 2022, albeit with less dazzling results. O’Rourke ran just 0.5 points ahead of the typical statewide Democrat in his double-digit loss to Gov. Greg Abbott (VAR: 0.6). Abrams bowed out with a -1.4 VAR in her rematch against Kemp (VAR: 1.6).

There’s also an interesting theme surrounding a trio of GOP governors first elected in 2018. Ohio Gov. Mike DeWine, Florida Gov. Ron DeSantis, and Iowa Gov. Kim Reynolds all initially won races rated as Toss-up or Tilt, but demonstrated their staying power four years later: DeWine recorded a 7.9 VAR, DeSantis posted a 5.5 VAR, and Reynolds notched a 5.3 VAR. Their closest peers on the Democratic side would be Colorado Gov. Jared Polis (VAR: 5.7) and Michigan Gov. Gretchen Whitmer (VAR: 3.3). As it turns out, if you win an election in a state that was already trending toward your party, you might not find yourself in an especially competitive contest the next time around.

This story first appeared in InsideElections.com on January 10, 2023.