Idaho Redistricting: No Big Changes Yet

Idaho was the second-fastest growing state between 2010 and 2020, but the Gem State’s 17-percent growth rate was not quite enough to secure it an additional congressional district.

The commission did just that, shifting just a few precincts from the 1st to the 2nd District in Ada County (Boise metropolitan area), and leaving the map otherwise identical to the one already in place. 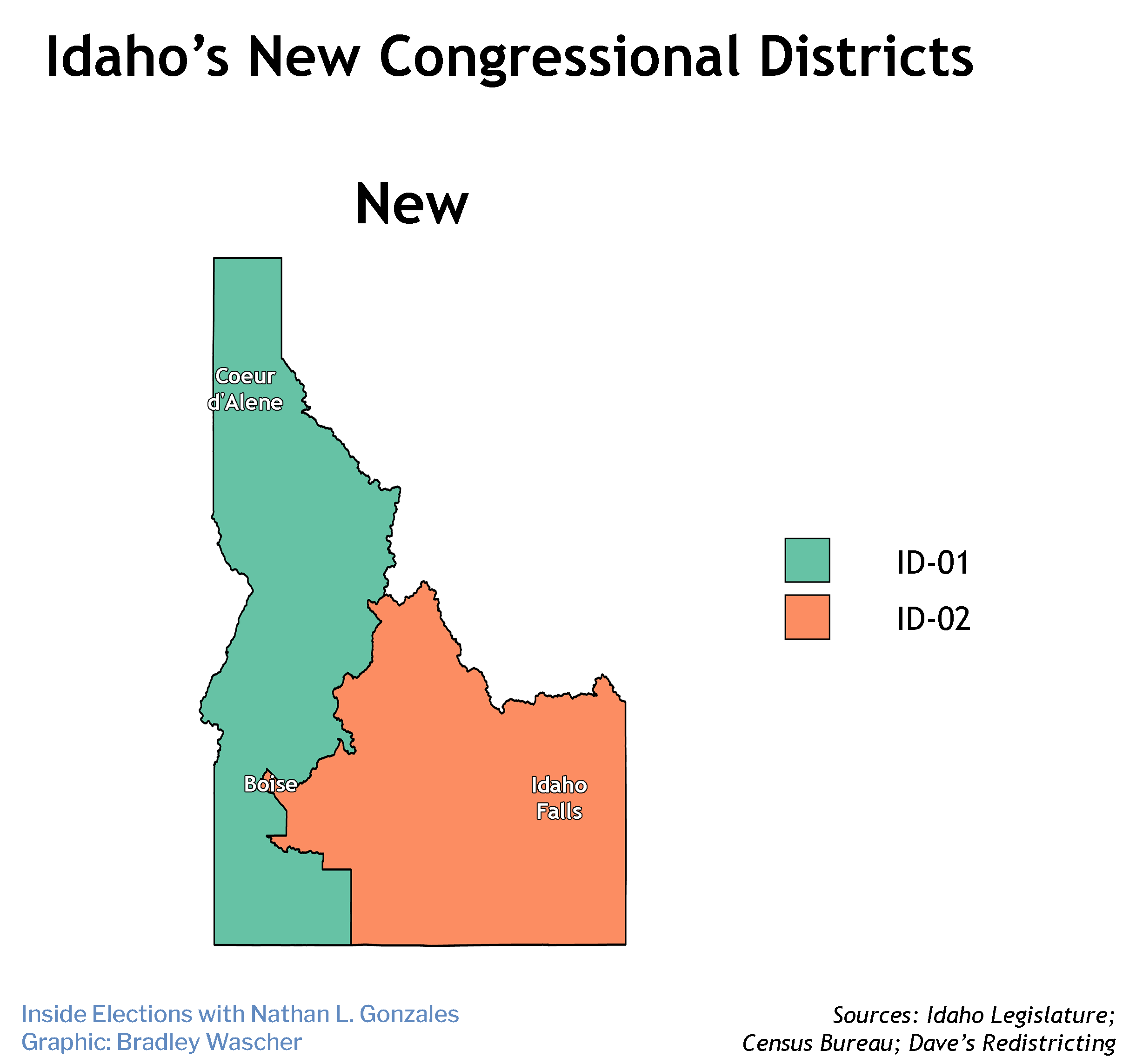 The map, which was approved by both Republican commissioners and one of the two Democratic commissioners, faces several legal challenges in state court, including one from Ada County itself, which objects to being split between the two districts.

Ada is the only county in the state (out of 44) that is split between the two districts, and it is also where nearly half of the state’s Democratic voters reside. In 2020, Joe Biden won 287,021 votes in Idaho, 120,539 of which came from Ada County.

But that court challenge and a few others in a similar vein face steep odds. Ada County has been split between districts for the past five decades.

1st District
The 1st was roughly 35,000 residents above its target population and had to shed a few precincts to the 2nd. The change happened entirely in Ada County, where portions of Garden City, Eagle, and an eastern sliver of Meridian were moved from the 1st to the 2nd. Otherwise, the district remains the same.

The minimal changes extend to the district’s partisan lean. The old 1st voted for President Donald Trump by 37 points, 67-30 percent. The new 1st would have voted for Trump by 38 points, 68-30 percent.

Republican Rep. Russ Fulcher won re-election by 39 points, 69-38 percent, in 2020. Any danger would come in a GOP primary, and thus far Fulcher doesn’t have any announced competitors. Solid Republican.

2nd District
The 2nd extended ever so slightly westward to meet its target population but also remains nearly identical to its previous iteration.

But that doesn’t mean longtime GOP Rep. Mike Simpson can count on a thirteenth term quite yet. First he’ll have to win renomination, and to do so he’ll have to get past a familiar face: Bryan Smith, the Boise businessman who ran for this seat in 2014 with backing from the anti-tax Club for Growth, Senate Conservatives Fund, and other conservative groups. The primary became an expensive proxy battle between the insurgent Tea Party and allies of House Speaker John Boehner, a close ally of the congressman. More than $3 million in outside money flowed into the district, mostly in support of Simpson though the Club did spend $500,000 backing Smith, who lost to Simpson 62-38 percent.

This time, Smith is running against Simpson as insufficiently conservative and anti-Trump, given that Simpson did not vote to overturn Biden’s Electoral College victory and did vote to establish a bipartisan January 6 commission. He’s also taking aim at Simpson’s plan to remove several dams from the Snake River in an effort to save endangered salmon populations. Simpson’s plan has aligned him with Oregon Democrats such as Rep. Earl Blumenauer and Gov. Kate Brown, and earned him the intense ire of Idaho Republicans including Gov. Brad Little, Sen. Jim Risch, and the 1st District’s Fulcher. The state party issued a “vote of no confidence” in Simpson this spring.

Smith entered this race after the latest filing deadline, so he has not reported fundraising numbers yet. Simpson had just $346,000 in the bank on Sept. 30, and has been raising money at a languid pace so far. If Smith’s primary challenge heats up, and if outside groups get involved like they did in 2014, this race could get interesting.

Regardless of which man emerges from the primary, in the general election this district is Solid Republican.

This story first appeared in Inside Elections with Nathan L. Gonzales on December 22, 2021.

© 2021, Inside Elections with Nathan L. Gonzales, — All rights reserved. Reprinted with permission.