Utah is one of the most Republican states in the union, but it has long had one competitive congressional district centered on Salt Lake City.

No longer. The new map passed by the Republican state legislature and signed by Gov. Spencer Cox, also a Republican, splits Salt Lake County between all four of the state’s districts and diffuses what little voting power Utah’s Democrats held over the past decade.

While the commission still produced several maps —  most of which kept a competitive Salt Lake district — the legislature ignored those proposals in favor of its own.

As a result the 4th District becomes much more Republican, foreclosing any Democratic opportunity in the Beehive State.

Any competition in Utah next year will be for the Republican nominations in districts. Utah has a  hybrid convention-primary system for selecting nominees; if no candidate wins 60 percent at a nominating convention, the top two candidates progress to a primary, and candidates can also qualify directly for the primary by gathering signatures.

1st District
The new 1st is more compact than its predecessor, as it sheds its eastern portions: all of Duchesne, Uintah, and Daggett counties and most of Summit County. To compensate, the district reaches into Salt Lake County’s northeast quadrant.

As a result, the district becomes more Democratic. Under the old lines it voted for President Donald Trump by 32 points, 63-31 percent. Under the new lines, the district would have voted for Trump by a narrower 19 points, 57-38 percent. But that shift isn’t enough to make freshman Rep. Blake Moore nervous in a general election. In the primary, Moore will face sovereign citizen Alena Erickson but that shouldn’t be much of a contest. Solid Republican.

2nd District
The 2nd is largely unchanged by redistricting. It gave up some Salt Lake County precincts to the 1st and took some other precincts from the 4th, but its partisanship remains nearly identical to the previous iteration. The new district would have voted for Trump, 56-39 percent, while the old district cast its ballots for Trump, 55-40 percent.

Republican Chris Stewart has held this seat since emerging victorious from a raucous nominating convention in 2012. This year he’ll face a challenge from attorney Erin Rider, who has gone after Stewart for his Jan. 6 vote to overturn the results of the 2020 presidential election. Rider will try to gather the 7,000 signatures necessary to force Stewart into a primary.

Regardless of who emerges, this district is Solid Republican.

3rd District
The 3rd picks up a few more precincts in Salt Lake County from the 4th District, sends the 4th more of Utah County, and collects all of Duchesne, Uintah, Daggett counties and much of Summit County from the 1st District.

On balance, those changes make the 3rd a tad less Republican. The old district voted for Trump by 24 points, 59-35 percent. The new district would have voted for Trump, 57-38 percent.

Republican John Curtis doesn’t have any primary challengers — yet. The former Provo mayor has been ever-so-slightly more critical of former president Trump than most of his colleagues. He acknowledged Biden as president-elect in early November and publicly contemplated voting to impeach Trump after the Jan. 6 insurrection, though ultimately voted no and instead introduced a resolution to condemn and censure the then-president. He was also one of a few dozen Republicans to vote to create a bipartisan commission to investigate what happened on Jan.  6.

Curtis had $717,000 in the bank on Sept. 30, and if there’s any state where being a Trump-skeptical Republican is an asset rather than a liability, it’s Utah. Solid Republican.

But the new 4th, which sheds some of its northernmost Democratic Salt Lake City precincts and picks up more of rural, deeply Republican areas in Sanpete and Utah counties, would have voted for Trump by 26 points, 60-34 percent. 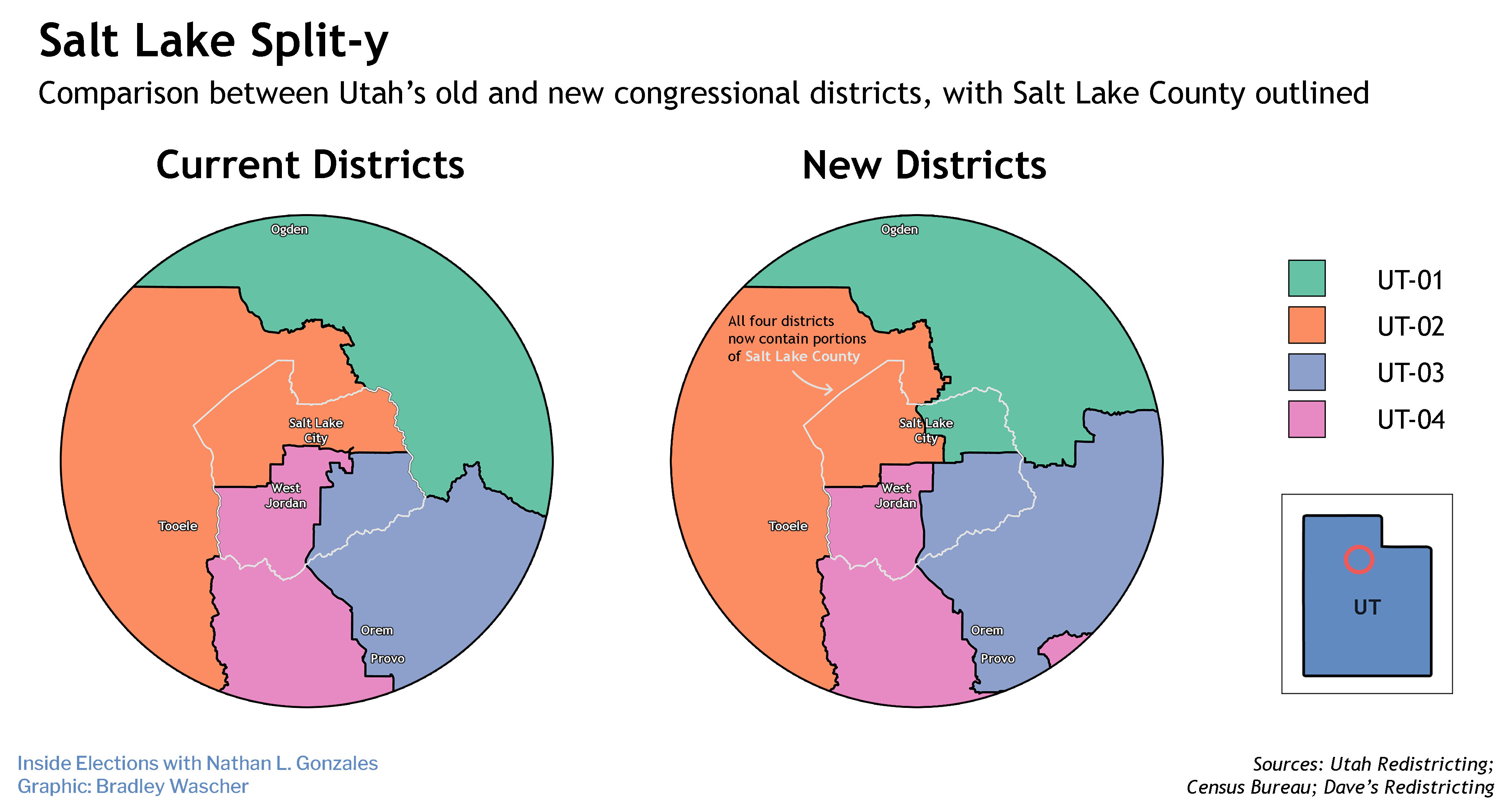 That makes it virtually impossible for a Democrat to win, even one as uniquely suited for the area as McAdams, a popular Mormon former mayor who overperformed the top of the ticket by 8 points in 2020, or current Salt Lake County Mayor Jenny Wilson. Had the district been more favorable to Democrats, McAdams may have run again.

But under the new lines, the only danger Owens might face is in a Republican primary. He currently has two primary challengers running as more moderate alternatives: Google people operations officer Jake Hunsaker and public relations consultant Nicholas Huey. Hunsaker had just $60,000 in the bank at the end of September, and Huey entered the race after the latest FEC filing deadline. Owens had a $543,000 war chest on Sept. 30, and while he’s courted controversy in the past he doesn’t appear to be vulnerable at the moment. Either way, this district is Solid Republican.

This story first appeared in InsideElections.com on December 23, 2021.