The 2020 campaign isn’t quite over yet, but it is reaching the denouement. And as the final surveys continue to trickle in until Tuesday, now is a great time to step back and contextualize the trends driving the past six months of general election polls.

Starting off with today’s topline: in an average of the 35 most recent national polls, Joe Biden led Donald Trump by 8.6 points (51.6 percent to 42.9 percent). Following a 2-point bump in the frenzied first half of October, the former vice president’s lead has since fallen back into familiar territory, largely unaffected by the final presidential debate.

To be sure, a gap of 8 points might as well be considered the norm for this election. Although Biden’s margin nationwide occasionally reached double digits, and although President Trump also saw his own bounce after the Republican National Convention in August, most polling shifts this year were temporary and small. Sometimes Biden was up by 6 points and other times he was up by 10 points, but after gaining an initial advantage in May, that national lead never appeared to be in serious danger. 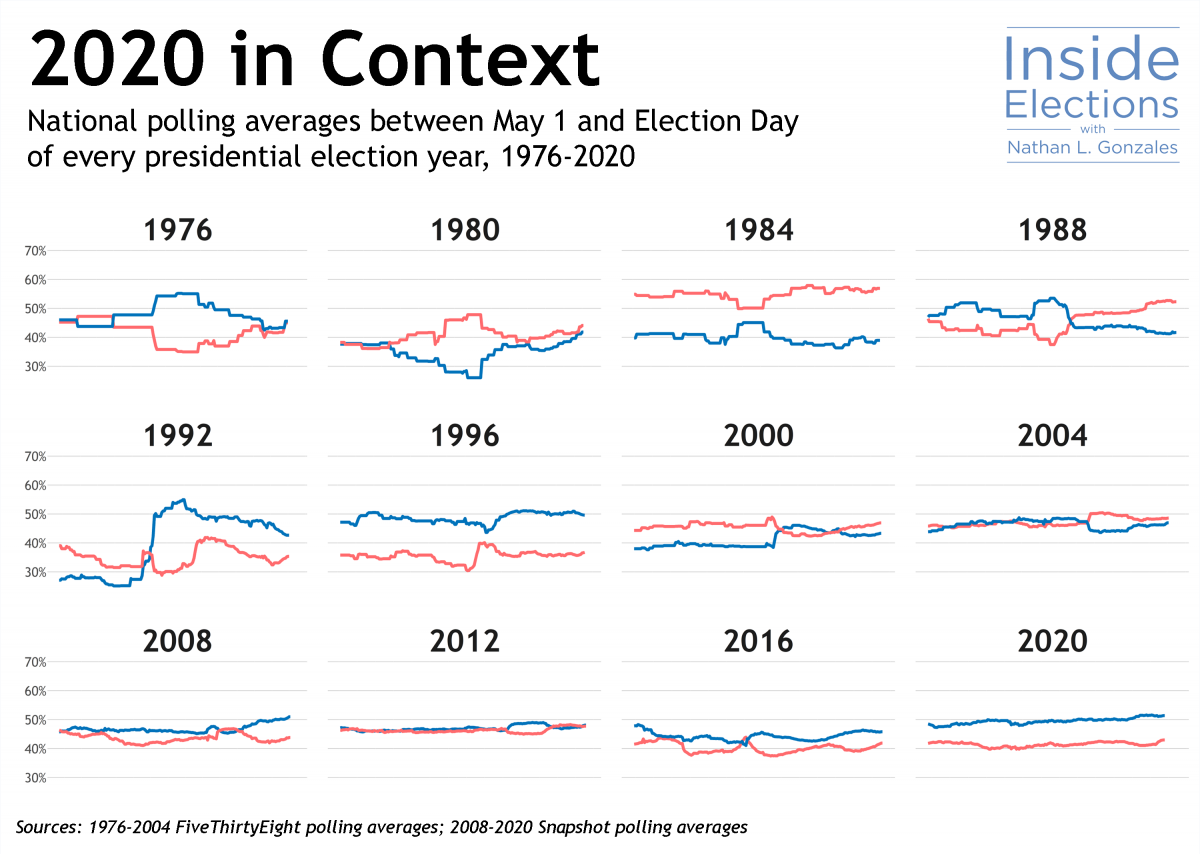 In fact, based on the spread and range of the topline margins since June, 2020 has produced the most stable polls of any election in the last half-century. Considering this year’s turbulent and unprecedented events, such consistency is nothing short of remarkable.

All this said, though, it’s important to remember that the campaign is still happening for another four days. Polls are not votes, as the saying goes, meaning these numbers are far from definitive.

There’s a non-zero chance, for example, that a major polling error turns 2020 into another 1948 or 1980. But polling practices have improved markedly in the 72 years since Truman defeated Dewey and the 40 years since Reagan routed Carter — after all, not only are many of today’s pollsters more responsible about expressing uncertainty, they also keep their surveys in the field until right before Election Day to better detect late movement. More recent tweaks to pollsters’ methodologies, including the decision to weight by respondents’ education, provide additional safeguards against potential sources of error.

So, as has been the case for most of the general election season, the polls must miss by a historic amount in order for President Trump to secure a second term. And because tens of millions of early ballots have already been cast in a race with fewer undecided voters than 2016, he likely won’t be able to bank on the same support from late-deciders that pushed him over the finish line four years ago.

In the battleground states, too, the story of this campaign has been characterized by stability.

Over the past six months, the most consequential tightening has actually occurred in traditionally Republican states, possibly enabling Joe Biden to pad his advantage and claim an even larger victory in the Electoral College. Indeed, looking solely at the Snapshot averages for every state, the former vice president is on track to earn approximately 350 electoral votes — which is directly in line with the latest Inside Elections presidential ratings.

Although few high-quality polls have been released in Arizona over the past two weeks, Biden still maintains a consistent lead. A Snapshot of the 14 latest polls showed Biden leading by 3.4 points (48.6 percent to 45.3 percent). The margin one week ago was Biden +3.4, whereas two weeks ago saw Biden +3.1 and four weeks ago found Biden +3.5. Rating: Tilt Democratic.

Biden’s lead in Florida has seemingly narrowed in the final weeks of the campaign, but this tightening might be due to a flood of partisan polls from firms with dubious track records. Live-caller surveys, on the other hand, produced toplines similar to those from the beginning of the month: Monmouth University found Biden +6, Marist College and CNN/SSRS both recorded Biden +4, and Quinnipiac University had Biden +3. Across the 18 most recent polls, Biden led by an average of 2.1 points (48.9 percent to 46.9 percent). One week ago, Biden was up by 2.7 points, compared to Biden +3.3 two weeks ago and Biden +4 four weeks ago. Tilt Democratic. 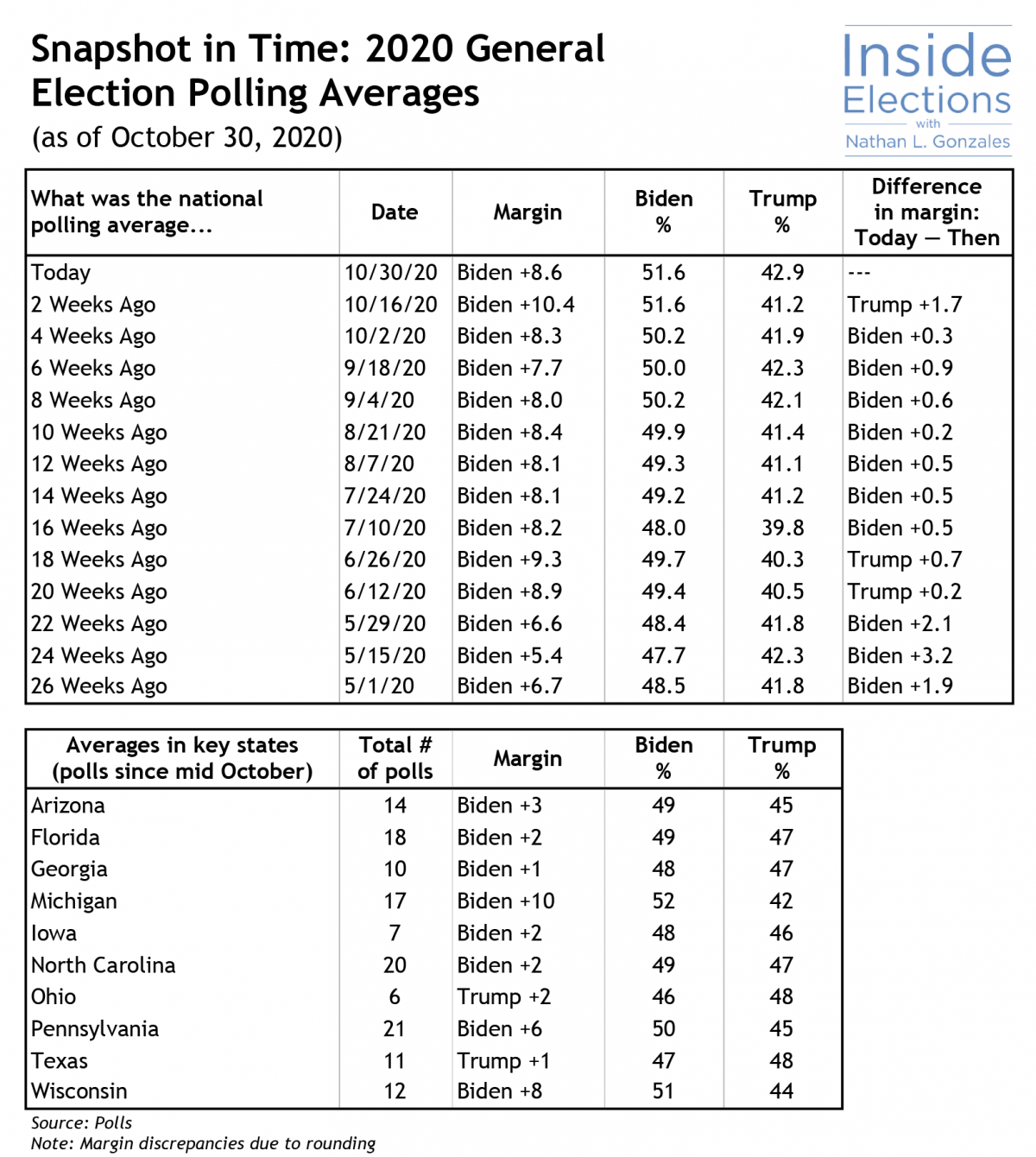 Once considered a relatively strong state for President Trump, Iowa has emerged as one of the closest battlegrounds in this election cycle. For instance, Monmouth University and Siena College/NYT both found Biden +3, while Quinnipiac University recorded Trump +1. The Snapshot aggregate is even slimmer, with the seven latest polls suggesting a Biden advantage of 1.6 points (47.6 percent to 46 percent). One week ago, the gap was Biden +0.6; two weeks ago, Biden +0.5; four weeks ago, Biden +0.8. Toss-up.

In Michigan, Biden’s advantage grew slightly, solidifying the state as a key part of his Electoral College strategy. Fox News recorded Biden +12 while Siena College/NYT found Biden +8. More broadly, an average of 17 polls from the past two weeks placed Biden ahead by 9.5 points (51.5 percent to 42 percent). One week ago, he was up by 7.1 points; two weeks ago, Biden’s lead was 6.6 points; four weeks ago, his lead was 6.1 points. Lean Democratic.

North Carolina’s newest polls also point to a slightly slimmer Biden advantage. Siena College/NYT recorded Biden +3 and ABC News/The Washington Post found Biden +1. In the latest Snapshot, Biden led by an average of 2 points across the 20 newest surveys (48.87 percent to 46.7 percent). His advantage was 2.6 points one week ago, 3.1 points two weeks ago, and 2.1 points four weeks ago. Move to Tilt Democratic.

Ohio is one of the few states where the president consistently leads in the aggregate. Fox News found Trump +3 and Quinnipiac University measured Biden +5. The six latest polls averaged to Trump +1.8 (47.7 percent to 45.8 percent). The lead was Trump +1.2 points one week ago, Trump +1.8 points two weeks ago, and Trump +0.7 points four weeks ago. Toss-up.

In Pennsylvania, the former vice president continues to poll approximately five points ahead of President Trump. CNN/SSRS measured Biden +10, Quinnipiac University saw Biden +8 and Biden +7 in two separate polls, and Fox News recorded Biden +5. An aggregate of 21 polls put Biden up by 5.5 points (50.1 percent to 44.6 percent). One week ago, the gap was Biden +5.5; two weeks ago, Biden +6; four weeks ago, Biden +6.8. Lean Democratic.

In Texas, President Trump also maintains a slim edge. Siena College/NYT recorded Trump +4, while Quinnipiac University found both candidates tied at 47 percent. A Snapshot of the eleven newest polls showed Trump +0.8 (46.8 percent to 47.6 percent). The average one week ago was Trump +0.4, whereas two weeks ago saw Trump +0.8 and four weeks ago found Trump +2.1. Move to Toss-up.

Compared to the other battlegrounds, Biden’s lead in Wisconsin has been among the most steady over the past two weeks, with one outlier poll generating particular interest. ABC News/The Washington Post recorded Biden +17, whereas Fox News and Marquette University Law School both found Biden +5. The latest Snapshot of 12 polls resulted in an average lead of Biden +7.7 (51.3 percent to 43.7 percent). That margin was Biden +7.3 one week ago, Biden +7 two weeks ago, and Biden +6 four weeks ago. Lean Democratic.

This story first appeared in InsideElections.com on October 30, 2020.