One way to understand North Carolina’s politics is by studying the trends within its individual congressional districts. This is precisely the aim of the Inside Elections Baseline metric, which captures a state or congressional district’s political performance by combining all federal and state election results over the past four election cycles into a single average.

We are excited to continue the rollout of Baseline by district with the scores for North Carolina. After the election, we’ll have another cycle of data to incorporate into the average and identify statewide and district trends.

The latest map should help Democrats. They appear poised to flip at least two House seats: the 2nd (Baseline of D +18.9) and the 6th (Baseline of D +18.1). GOP Reps. George Holding and Mark Walker, respectively, are retiring as a result of the new lines, and Inside Elections currently rates both races as Likely Democratic.

All this said — and contrary to what one might expect given regularly close elections at the state level — many of North Carolina’s congressional districts are uncompetitive. According to Baseline, Republicans hold an advantage in eight of the state’s 13 congressional districts. Moreover, ten of the 13 districts prefer either Democrats or Republicans by at least 11 points on average. The three exceptions are the 8th, the 9th, and the 11th. 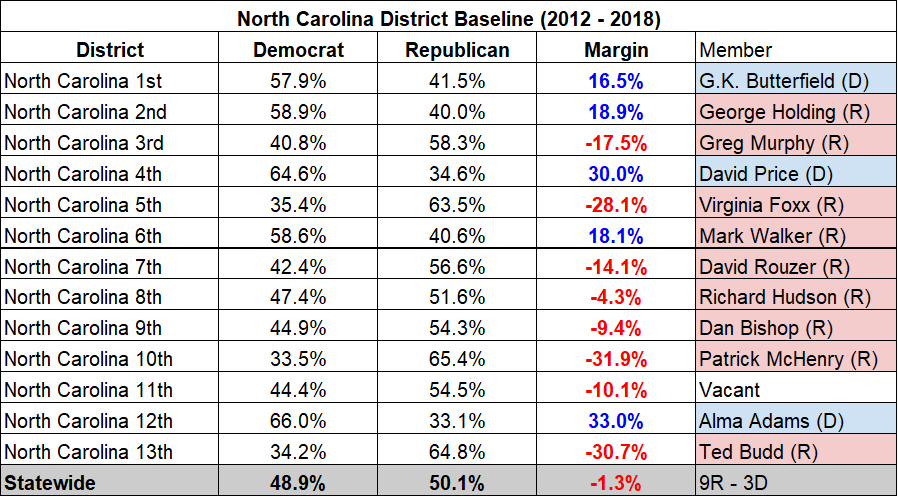 The competitiveness of the 8th District (Baseline of R+4.2) is due mainly to North Carolina’s new congressional map: this district now encompasses all of Cumberland County, which includes the city of Fayetteville and has consistently sided with Democrats in statewide elections. Under its current boundaries, the 8th voted for Mitt Romney by 4 points in 2012 and for Donald Trump by 9 points in 2016. But considering the full absorption of Cumberland County and the continued growth of exurban Cabarrus County, Democrats could potentially make gains in this south-central North Carolina district. Inside Elections currently rates the House race between Democrat Patricia Timmons-Goodson and incumbent Republican Rep. Richard Hudson as Tilt Republican.

North Carolina’s 9th District (Baseline of R+9.4), on the other hand, was mostly unaffected by the 2019 redistricting, but it received national attention (and temporary competitiveness) around that same time. After evidence of voting irregularities in the district’s 2018 House election, the results were invalidated and a special election was held the next year, resulting in a close contest won by Republican Dan Bishop. Nevertheless, the 9th still skews conservative overall: this south-central district voted for Romney by 11 points and Trump by 10 points, and it voted for the Republican in 24 of the 25 elections used to calculate the district’s Baseline. As such, Bishop’s chances at a second term are more secure, and Inside Elections rates the 9th as Solid Republican.

The 2019 redistricting also made the 11th District (Baseline R +10.1) significantly less Republican. Although the new lines added the reliably conservative Polk County to North Carolina’s westernmost district, those GOP gains were offset by the full absorption of liberal Buncombe County, home to the city of Asheville. Additionally, the 11th became vacant earlier this year, when GOP Rep. Mark Meadows resigned to join the White House as Chief of Staff. Republican businessman Madison Cawthorn has faced a number of controversies, but this district still voted for Romney by 12 points and Trump by 17 points, giving Cawthorn a decent shot at keeping this seat in the GOP’s column. Lean Republican.

Presidential Outlook
Of course, North Carolina is no stranger to competitive statewide elections: its overall Baseline is R +1.2. But while the state has been decided by fewer than 4 points in each of the last three presidential races, it has only voted for a Democrat once in the past 40 years, when Barack Obama defeated John McCain by 0.3 points in 2008.

A big reason why Obama carried North Carolina in 2008 was increased turnout among Black voters. This year too, the winner of North Carolina will likely earn its 15 electoral votes by expanding his party’s existing coalition. For President Trump, that means getting high turnout in rural areas (as he did in 2016), while also staying competitive in the suburbs, particularly those surrounding Charlotte. Joe Biden’s path to victory could come through especially strong performances in metropolitan areas — after all, the counties surrounding the Research Triangle are some of North Carolina’s fastest-growing in population.

Whatever happens, with competitive contests up and down the ballot, this will surely be a key state to watch on November 3rd. Inside Elections currently rates North Carolina as Tilt Democratic at the presidential level.

This story first appeared in InsideElections.com on November 2, 2020.