Alabama’s congressional map has hardly changed over the past few redistricting cycles, and the same seems set to hold true for 2021.

One of the most reliably Republican states in the country, Alabama’s congressional delegation is currently made up of six Republicans and one Democrat, a partisan breakdown that hasn’t budged since 2010. On Nov. 4, Republican Gov. Kay Ivey approved new district lines that will likely cement that number for at least the next few election cycles.

In terms of both geography and partisanship, Alabama’s congressional districts received minor facelifts compared to their current incarnations, with most adjustments simply smoothing or moving lines to reach population targets. Arguably, the most noticeable differences appear at the most atomic level: the new congressional map was achieved by splitting a mere 14 precincts across the entire state, less than one-tenth of the total in the current map (much to the pleasure of election-data nerds everywhere).

But the mapmaking process was not without controversy.

Cartographers could have split the 7th District into two districts, primarily to improve racial representation. Although approximately 26 percent of the state’s total population is Black, the 7th is Alabama’s only district with a nonwhite representative — it has elected a Black member to Congress every year since it was redrawn to comply with the Voting Rights Act in the 1990s. Another argument in favor of splitting the 7th was a relative drop in headcount: the district’s population fell short of Census apportionment targets by 53,000 people, the largest gap in any of Alabama’s congressional districts. In the final approved map, however, the 7th saw only minor changes around its edges, similar to the state's six other seats.

As a result, the new congressional map is already being challenged in a number of lawsuits. Opponents cite a failure to comply with Section 2 of the VRA, which protects and ensures the creation of majority-minority districts. One case, closely tied to the National Democratic Redistricting Committee led by former Attorney General Eric Holder, argues in particular, “by combining cracked Black populations in [the 1st, 2nd, and 3rd Districts] and unpacking [the 7th District], the Alabama mapdrawers could have drawn two majority-Black districts.”

This isn’t the first time recently that Alabama has made headlines because of redistricting and voting rights. In 2017, mapmakers were required to redraw a dozen of the state’s legislative districts after a federal court found the lines to be unfair on the basis of race, concluding a five-year legal battle that went all the way to the Supreme Court. And, perhaps most prominently, it was Alabama’s own Shelby County that filed suit and eventually pressured the Supreme Court to invalidate portions of the VRA in the 2013 landmark case Shelby County v. Holder (the same Holder as above).

Regardless of how these latest legal challenges play out, even in a best-case scenario for Democrats, splitting the 7th District would have only netted the party a gain of one seat.

Otherwise, under the newly approved map, Republicans appear poised to maintain their 6R-1D advantage in Alabama’s congressional delegation for years to come — none of the seven districts look to be very competitive. 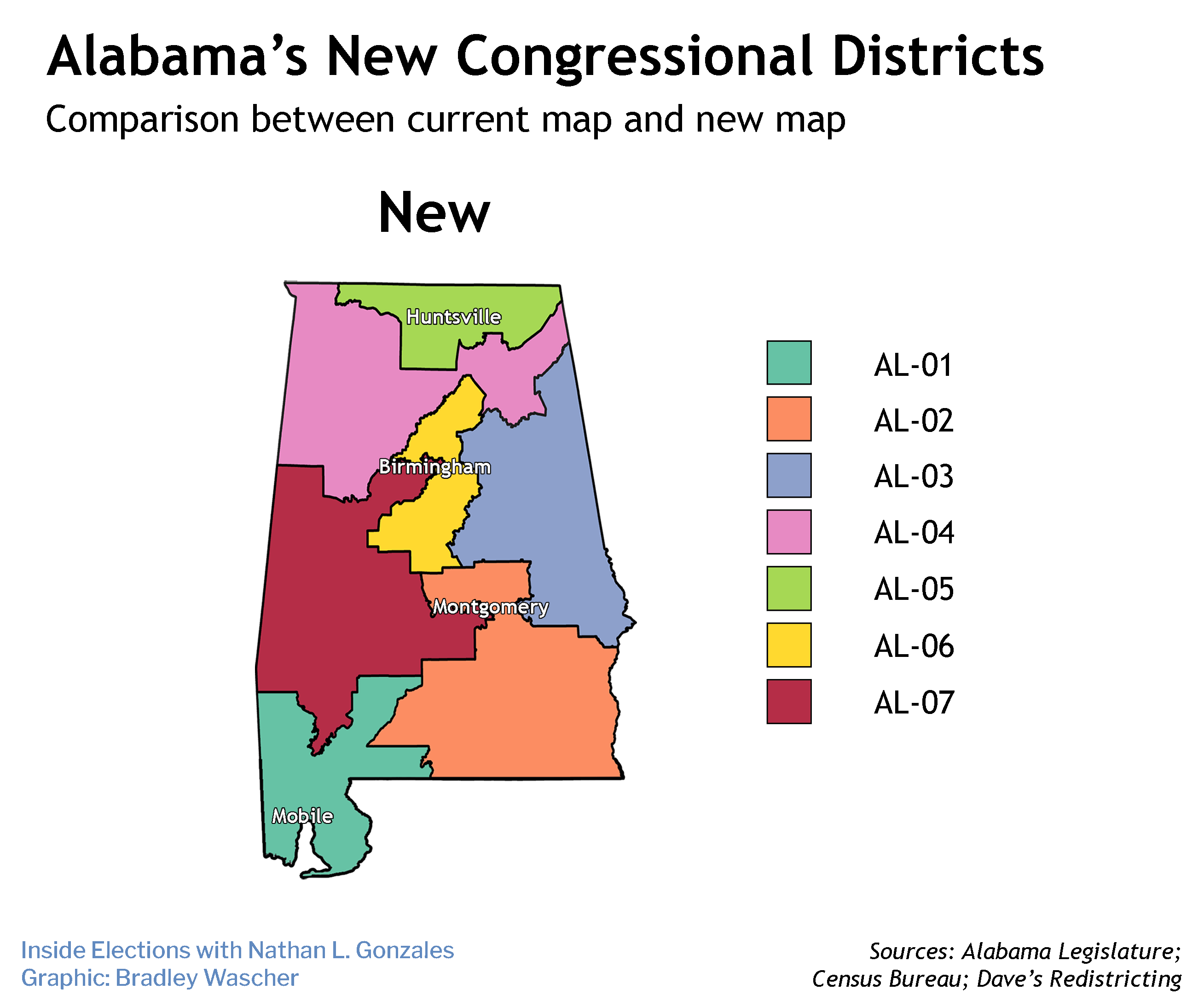 1st District
The 1st remains in the southwest corner of the state, including the city of Mobile. According to a composite average of all federal and statewide elections in Alabama between 2016 and 2020 calculated by Inside Elections, the district has an average partisanship of R+22.1 under the new lines, and it would have voted for former President Donald Trump by approximately 28 points in 2020. Republican Rep. Jerry Carl Jr. should have little difficulty securing a second term. Initial Rating: Solid Republican.

2nd District
Beginning in Alabama’s southeast corner and extending as far north as Lake Martin, the 2nd still contains Dothan, Troy, and portions of east Montgomery. Considering Republican Rep. Barry Moore will be running in a district with an average partisanship of R+25.3 across 2016-2020 races, he seems easily set up for a second term. Trump would have carried the district in 2020 by around 29 points under these new lines — a reminder of why Moore’s predecessor to the seat, five-term Rep. Martha Roby, chose to retire when her criticisms of the former president sank her reputation within the GOP. Initial Rating: Solid Republican.

3rd District
The 3rd follows most of Alabama’s eastern border with Georgia and continues to include the cities of Auburn and Tuskegee, with the biggest difference being the addition of Coosa County. In short, Republican Rep. Mike Rogers doesn’t have much to worry about in this Trump+34 district that voted for Republicans by 29.5 points across an average of all federal and statewide elections between 2016 and 2020. Initial Rating: Solid Republican.

4th District
Situated in north-central Alabama, the 4th still spans the state from Mississippi to Georgia, and includes the city of Gadsden. Electorally, it’s heavily Republican: Trump’s share in the old 4th was no less than 80 percent in both 2016 and 2020. (In fact, he did better here than in any other congressional district in the country in both elections.) Under the revised lines, the outlook doesn’t look much worse for Republicans; Trump’s margin in the new 4th would have been approximately 62 points. More broadly, the 4th has an average partisanship of R+53.2 in the 2016-2020 composite. It must be music to the ears for Republican Rep. Robert Aderholt. Initial Rating: Solid Republican.

5th District
As Alabama’s northernmost district, the 5th has long included Huntsville, but it has also now picked back up the city of Florence. Republican Rep. Mo Brooks is giving up his seat to run in Alabama’s open Senate race in 2022, seeking to replace the retiring Republican Sen. Richard Shelby. (Brooks previously ran in Alabama’s Senate special election in 2017, finishing third in the GOP primary with 20 percent). A sizable field has emerged to fill the soon-to-be vacant 5th. Dale Strong, chairman of the Madison County Commission, led in fundraising at the end of September over second-place fundraiser Casey Wardynski, a former Assistant Secretary of the Army under Trump and superintendent of Huntsville City Schools who donated $100,000 to his own campaign last quarter. Former state Sen. Paul Sanford, who retired from the state legislature in 2018 citing self-imposed term limits, entered the race at the beginning of November. Economic developer John Roberts is also running, as is educator Andy Blalock. So far, the one Democrat running is Charles Thompson, who had $1,500 in his campaign account on Sept. 30. But winning the GOP primary should also mean winning the general election: the new 5th has an average partisanship of R+23.7 in the 2016-2020 composite and would have voted for Trump in 2020 by approximately 27 points in 2020. Initial Rating: Solid Republican.

6th District
While the 6th District loses Coosa County and parts of Chilton and Jefferson counties, it still encompasses the eastern outskirts of Birmingham and its suburbs in Shelby County, solidifying the district’s central-Alabama identity. Another reliably Republican seat, the new 6th would have voted for Trump by around 30 points in 2020, with an average margin of R+25.2 in the composite of races between 2016-2020. Republican Rep. Gary Palmer is well-positioned for a fifth term. Initial Rating: Solid Republican.

7th District
This west-central district contains much of Black Belt region, known for its rich soil, and covers west-central Alabama to take in parts of both Montgomery and Birmingham, as well as all of Selma. Under the new lines, the 7th traded portions of Clarke County in the south for areas of Jefferson and Tuscaloosa counties in the north. Despite being Alabama’s sole majority-Black district, the share of the Black population in the 7th actually decreased as a result of redistricting, from 63 percent to just over 55 percent; meanwhile, the share of the district’s white population increased from 34 percent to 39 percent. Still, the new 7th has an average partisanship of D+30.1 in the 2016-2020 composite, and it would have voted for Joe Biden by approximately 32 points in 2020, meaning Rep. Terri Sewell will probably continue to be the lone Democrat in Alabama’s congressional delegation. Initial Rating: Solid Democratic.

This story first appeared in Inside Elections with Nathan L. Gonzales on November 22, 2021.

© 2021, Inside Elections with Nathan L. Gonzales, — All rights reserved. Reprinted with permission.