In the late hours of Sept. 28, Colorado’s independent redistricting commission approved a new congressional map. The Centennial State was allocated an additional representative in Congress during this year’s decennial reapportionment, and (pending final approval from the state Supreme Court) we now know what the new 8th District — as well as the updated lines for Colorado’s seven existing districts — will look like.

A New District
The most significant change to Colorado’s congressional map is the addition of the 8th District, which is situated in the suburbs north of Denver.

The 8th was designed with Colorado’s diverse demographics in mind. Specifically, one focus during the redistricting process was increasing representation for the state’s Hispanic community: although approximately 22 percent of Colorado’s population is Hispanic, there are currently no Hispanic members in its congressional delegation. But by taking in portions of Adams and Weld counties, including Commerce City, the 8th will be the most heavily Hispanic of Colorado’s eight districts, at 38.5 percent. 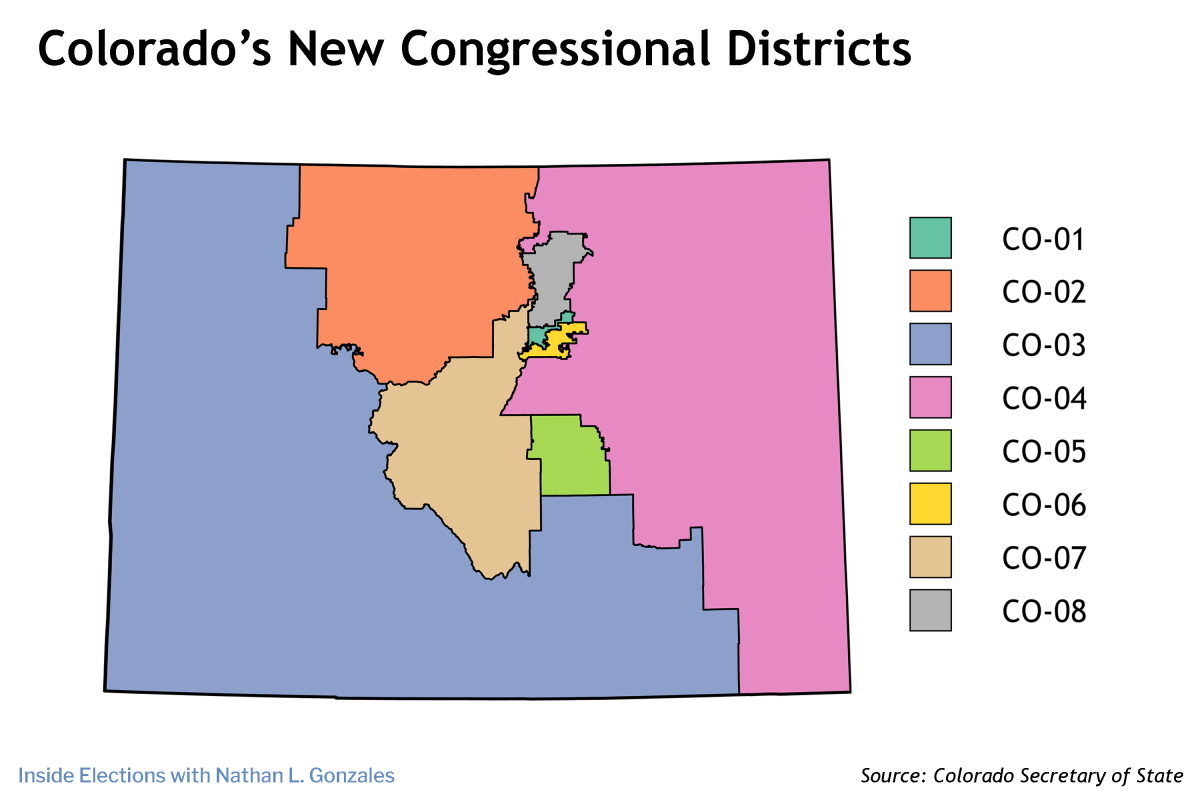 The 8th will also likely be Colorado’s most competitive district. It would have voted for Donald Trump by 2 points in 2016, and for Joe Biden by 4 points in 2020. More broadly, across the 10 statewide elections that have taken place in Colorado since 2016, the final margin for either party in the 8th was never larger than 5 points, demonstrating just how close future races might be.

The election to give the 8th its inaugural representative is still a year away, but a field is already starting to develop. Democratic state Rep. Yadira Caraveo announced her intention to run for the new seat in late August, a full month before the final map was decided by commissioners. As other candidates prepare their campaigns, the district’s rating starts at Toss-up.

Redrawing Old Lines
While the 8th District will probably add fresh electoral excitement to Colorado’s congressional politics, races in the state’s remaining districts might not be much different from 2020 to 2022.

Under the rules of Amendment Y, the 2018 ballot measure that established Colorado’s independent congressional redistricting commission, new maps cannot be drawn with the purpose of protecting incumbents. But at least for 2022, the current members of Colorado’s congressional delegation will start with a significant advantage, should they choose to run for re-election.

The 1st District still covers Denver, and is largely identical to its previous configuration. The primary difference is that the district has lost its slight southwest reach into Jefferson County, making the new lines reminiscent of those drawn after the 2000 census. This shouldn’t be a problem for Democratic Rep. Diana DeGette, however, as the 1st actually became more Democratic with the change. According to the Inside Elections Baseline metric, which captures each party’s political performance in a congressional district by combining all federal and state election results over the past four election cycles into a single average, the new 1st is D+51.2 — 8 points more Democratic than its previous incarnation; in the 2020 election, the district voted for Biden by 61 points. Initial rating: Solid Democratic.

The 2nd District still contains the cities of Fort Collins and Boulder, but many of the district’s smaller, outer counties have changed. In the west, the 2nd has gained all of Routt and Jackson counties, and it now extends more into Eagle County; in the east, it has lost Broomfield County, most of its area in Jefferson County, and what little reach it had into Park County. But similar to the shifts in the 1st District, these changes should shore up Democratic Rep. Joe Neguse: alongside voting for Biden by 40 points last November, the 2nd now has a Baseline of D+28.1, making it 8 points more favorable to Democrats than the previous lines. Initial rating: Solid Democratic.

The 3rd District, spanning most of the Western Slope, keeps Pueblo and Grand Junction but stays primarily rural. The district has gained Otero and Las Animas counties, while losing Custer, Jackson, Lake, and Routt counties as well as most of Eagle County. While the politics of the 3rd are bound to be eclectic by virtue of its wide geographic range, Republican Rep. Lauren Boebert, the gun-toting freshman who quickly developed a contentious national profile, appears to be slightly boosted by the absorption of additional GOP-friendly areas. The new 3rd has a Baseline of R+10.3, approximately 1 point more Republican than before, and it supported Trump by an 8-point margin in 2020. Initial rating: Likely Republican. 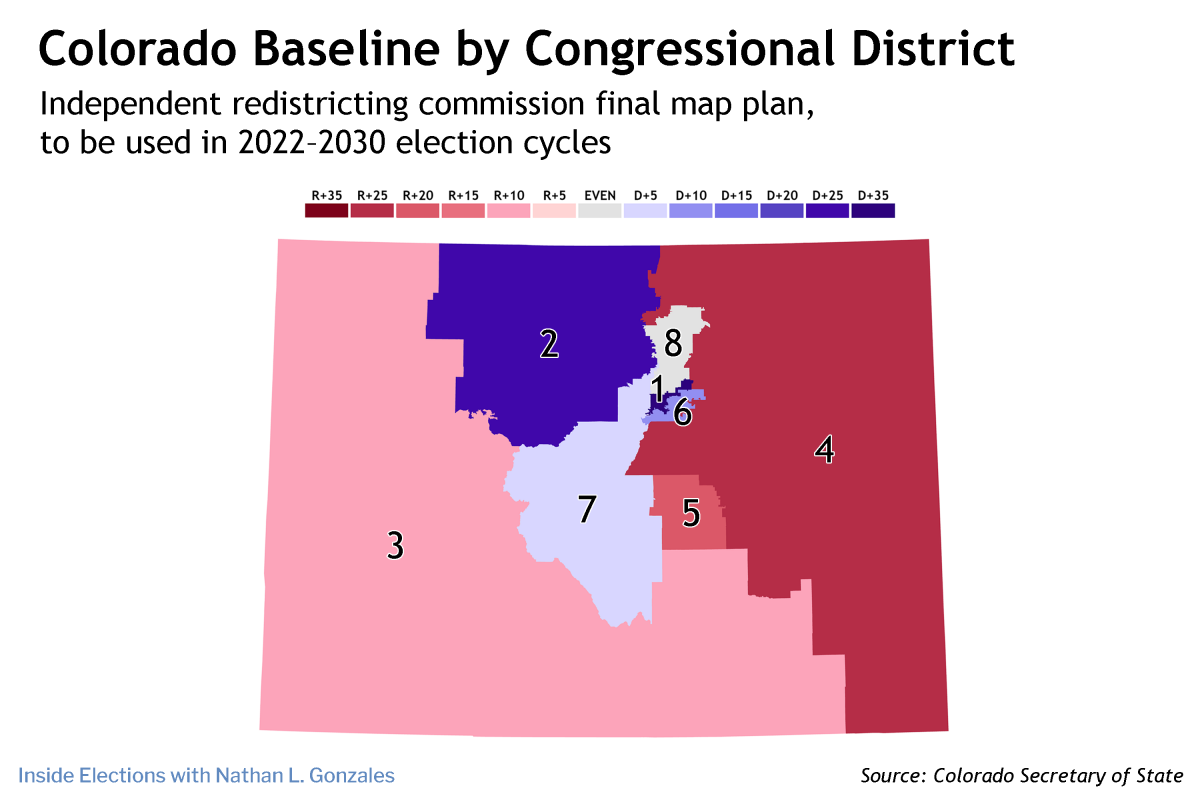 The 4th District, home to Colorado’s Eastern Plains, sees its contours remain mostly intact, as they have been for the better part of 40 years. The district now extends slightly more into El Paso and Adams counties, while losing Otero and Las Animas counties and portions of Weld County. Already a district where Democrats rarely reached 40 percent, the 4th is set to be even more favorable for GOP Rep. Ken Buck in the years to come: it would have voted Trump by 18 points in 2020, and according to Baseline, the new lines create a district that is R+27.9, 3.5 points more favorable for Republicans. Initial rating: Solid Republican.

The 5th District maintains its identity as the Colorado Springs district — perhaps now more than ever. The new 5th sheds the comparatively small Chaffee, Fremont, Park, and Teller counties, and is now entirely located in west and central El Paso County. But Republican Rep. Doug Lamborn has little to worry about as representative of one of the most conservative major cities in America. Alongside preferring Trump by 10 points last November, the 5th now has a Baseline of R+23.5, practically the same as it was before. Initial rating: Solid Republican.

The 6th District, which previously wrapped around Denver from the south, the east, and the north, loses its upper curvature. With most of the lost area coming from Adams County, the district is now primarily located in Arapahoe County, and the city of Aurora. The 6th also gains a sliver of Jefferson County, pushing Democratic Rep. Jason Crow even closer to safety in a district that has already trended toward (and flipped in favor of) Democrats over the last decade. The newly drawn 6th, which was Biden+24 in 2020, has a Baseline of D+9.9, 5 points more Democratic than the previous lines. Initial rating: Solid Democratic. 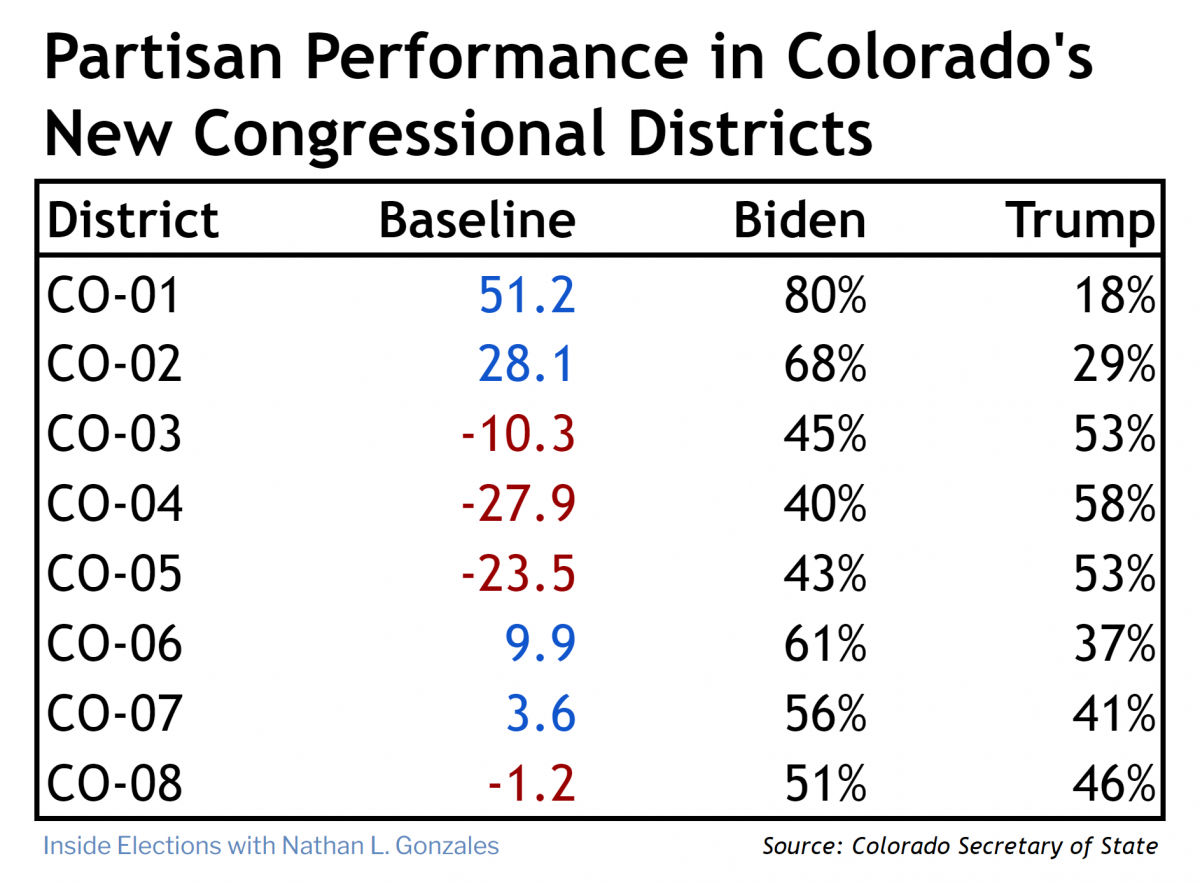 The 7th District is, in terms of appearance, the most substantially changed; the new boundaries are practically unrecognizable from when the district was first added in the 2002 redistricting cycle. Although the 7th loses almost all of its area in Adams County, in the north it gains Broomfield County and more of Jefferson County, and in the south it adds Chaffee, Custer, Fremont, Lake, Park, and Teller counties. Visual overhaul aside, this district still gets most of its votes from the west Denver suburbs, and has voted almost in lockstep with the state of Colorado as a whole over the past four election cycles. As such,  Democratic Rep. Ed Perlmutter has few reasons to worry right now in a district Biden won by 14 points in 2020 and Democratic Gov. Jared Polis won by 10 points in 2018 — even considering its D+3.6 Baseline. Initial rating: Likely Democratic.

Conclusion
This most recent cycle of congressional reapportionment no doubt impacted Colorado, a state whose population grew by 14.8 percent between 2010 and 2020.

The new 8th District, which is nearly 40 percent Hispanic, seems set to be the state’s most competitive seat in next year’s midterm elections, and it could add important diversity to Colorado’s congressional delegation.

The seven other districts, however, currently appear favorable for their four Democratic and three Republican incumbents, and it would take a particularly sour national environment to nudge one or two seats closer to competitiveness.

This story first appeared in InsideElections.com on October 4, 2021.