Oklahoma was home to one of the most surprising results of the 2018 midterm elections, when Democrats picked up a deeply Republican district in the heart of the state.

So when this year’s redistricting process rolled around, Republicans in the Oklahoma state legislature took care to ensure such an upset would be far less likely in the coming decade.

That meant parceling out the state’s most populous county, the Democratic-trending Oklahoma County, to three different districts to diffuse the region’s burgeoning Democratic voter base.

The result is a map that should elect five Republicans to five congressional districts without much difficulty for the coming decade. 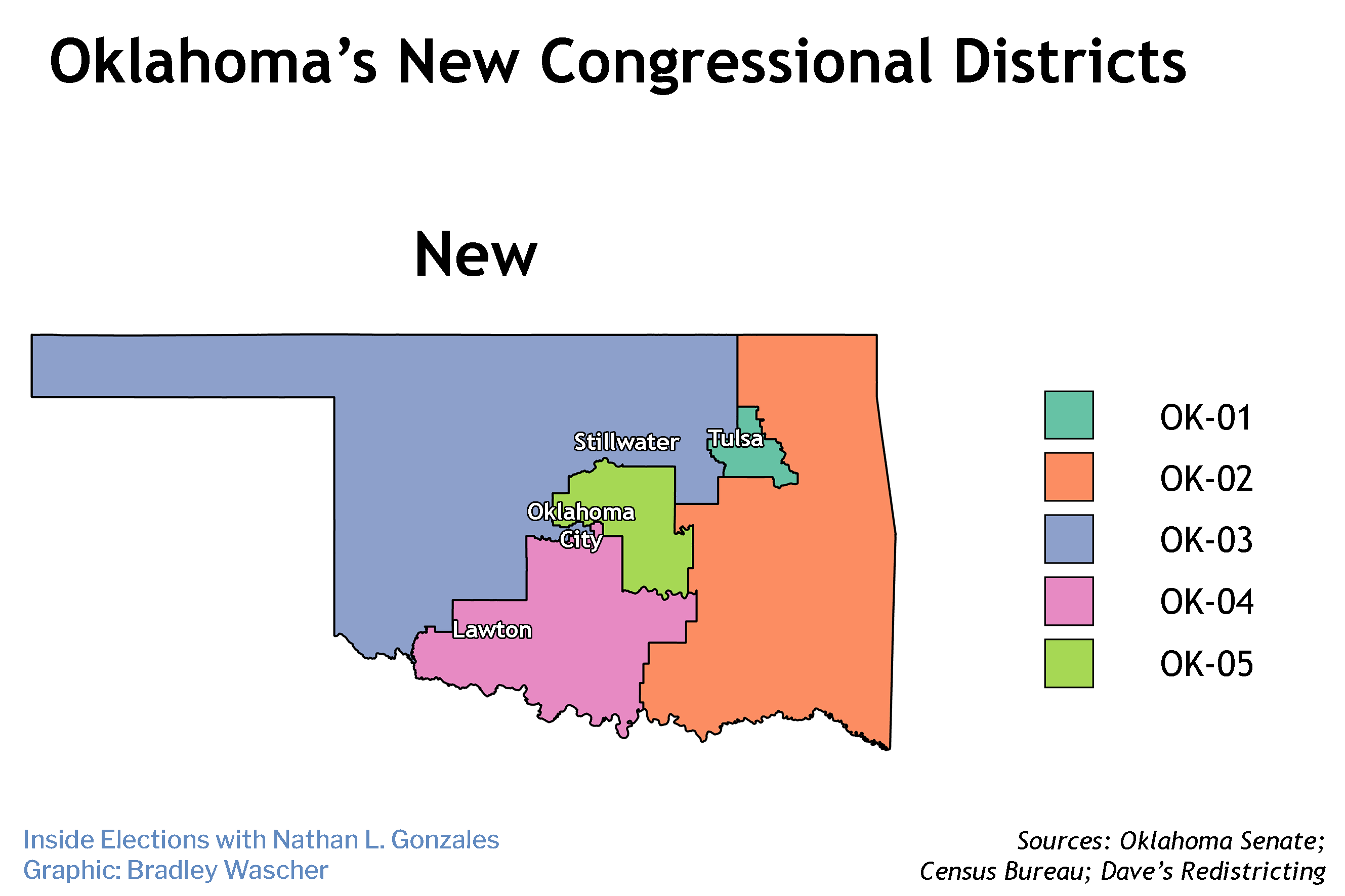 1st District
Republican Kevin Hern’s 1st District remains dominated by Tulsa County, which was 81 percent of the old district and 85 percent of the new district. Because the old 1st was larger than its target population, the district shed all of Washington County and the eastern half of Wagoner County to the 2nd District, losing its distinctive stovepipe shape in the process. It also picked up the city of Sapulpa from the 3rd District.

The partisanship of the district is largely unchanged. Under the old lines it voted for President Donald Trump 60-37 percent in 2020. Under the new lines it would have voted for him 59-38 percent.

Hern, a wealthy McDonald's franchisee, won his last two general elections by 31 and 18 points, respectively, and doesn’t look to be in any danger in a primary either. Democrats John Swoboda, a school teacher, and Adam Martin, a recent graduate of Oklahoma State, are running. Solid Republican.

2nd District
The 2nd is still the entire eastern portion of the state, and remains home to the largest Native American population of any congressional district in the country (25 percent). Because the old 2nd District was slightly under its target population, it absorbed Washington County and part of Wagoner County from the 1st District but is otherwise unchanged.

The new district would have voted for Trump 76-22 percent, the same margin as it did under the old lines. That means the real competition for the seat is the Republican primary.

In 2018, Rep. Markwayne Mullin faced several primary challengers after breaking the three-term pledge he made when he was first elected in 2012. He outpaced his closest competitor, Jarrin Jackson (who had been endorsed by former Sen. Tom Coburn) by 29 points, 54-25 percent. In 2020, Mullin faced state Sen. Joseph Silk in the primary. But armed with a Trump endorsement, Mullin won that more easily, 80-13 percent. No Republican has announced against him for 2022. Solid Republican.

3rd District
The 3rd still spans the entire western half of the state, from the Oklahoma Panhandle down to the edge of the Texas Panhandle, and all the way across northern Oklahoma to Tulsa.

But though the 3rd is largely left intact, it is also the vehicle Republicans used to crack Oklahoma County and create five solidly Republican districts.

As a result, the 3rd becomes slightly less Republican, but the district was already so Republican it makes little difference. Under the old lines, Trump won the 3rd by 52 points, 75-23 percent. Under the new lines, it would have been a 70-27 percent victory.

Republican Frank Lucas is one of the most senior members of the House, having served since 1994. He’ll continue to move up in the ranks when he wins next year. Solid Republican.

Because it also picks up some Democratic voters from the 5th, the new 4th shifts a hair leftward, from a Trump 65-32 percent victory under the old lines to a Trump 64-33 percent win under the new lines.

That’s no difference to Rep. Tom Cole, who is wrapping up 20 years in Congress and can count on two more if he wants them. Solid Republican.

5th District
Oklahoma Republicans’ primary goal this redistricting cycle was to shore up freshman Rep. Stephanie Bice, and they succeeded. Bice defeated Democrat Kendra Horn by 4 points, 52-48 percent, as Trump was carrying the district by a slightly wider 51-46 percent margin. 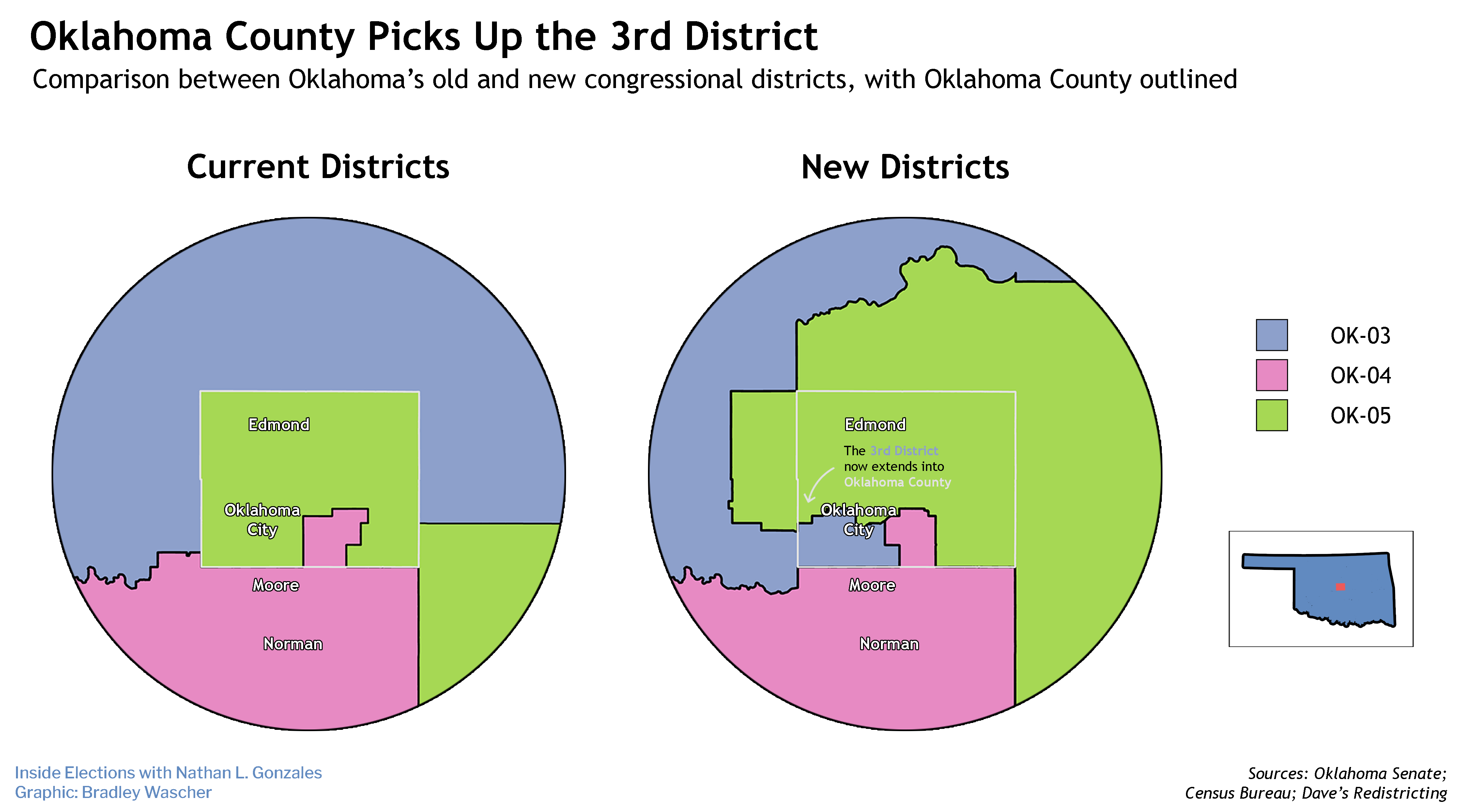 Under the new lines, Trump would have carried the 5th district handily, 58-39 percent. Even 2018 Democratic gubernatorial nominee Drew Edmondson, who put in the best performance of any Democrat this decade, would have lost the new 5th District, 48.4-48.2 percent (he won the old 5th by 9 points).

That means Bice is a heavy favorite for re-election in 2022, given the partisan lean of the district and the good national environment building for Republicans. Her likely opponent in the general election is Abby Broyles, the former TV news anchor who was the Democratic nominee for Senate in 2020. Broyles would have lost the new 5th District by 16 points, 56-40 percent to long-time GOP incumbent Jim Inhofe. Solid Republican.

This story first appeared in InsideElections.com on December 27, 2021.