June has been a rocky month for relations between President Donald Trump and the pollsters of America. Following his renewed admonishment of outlets who publish unfavorable toplines — along with his steadfast endorsement of dubious “unskewed” data — the president seems to realize he’s behind right now.

Indeed, in an average of national polls conducted over the past two weeks, Joe Biden currently leads Trump by 10.2 points (50.3 percent to 40.1 percent). Here’s how that figure compares to previous moments in the campaign:

Undoubtedly, the former vice president is not only leading; he’s gaining ground. For another way of looking at it, consider Biden’s position at the beginning of this month — the June 1st Snapshot placed him ahead by 6.8 points. Since then, that gap has grown by approximately one point per week, leading to the president’s current double-digit deficit.

In the Snapshot two weeks ago, there was evidence of Biden’s widening advantage. But due to the noise in toplines at the time, I hesitated against outright declaring the campaign as a 7-point race or a 10-point race. And today, that debate is not yet laid to rest — although it’s trending toward a larger margin for Biden. Out of 21 new polls, eleven showed the former vice president up by at least 10 points.

A second point of contention has actually been reconciled since the last Snapshot. EarlyJune aggregates of online polls produced slightly different results (and media narratives) than similar collections of telephone polls, by nearly a 3-point gap. That difference is now gone. Across 17 online surveys over the past 14 days, Biden led Trump nationally by an average of 9.7 points, which is close to the 10.5-point topline measured across four telephone polls during the same span. Notably, approximately 10 live-caller national surveys have been released so far in June.

State
The landscape in key states remains difficult to pinpoint. Thankfully and serendipitously though, polls continue to emerge from six competitive states, as well as from other potential battlegrounds.

Starting in Arizona, three new surveys all showed Biden ahead, but with varying levels of comfort. In their inaugural polls of this election cycle, Siena College/The New York Times found the former vice president leading in this state by seven points; Civiqs (D) and Change Research (D) saw Biden ahead by four points and one point, respectively. Overall, across six polls conducted in June, Biden led Trump by an average of 2.8 points (46.2 percent to 43.4 percent). Inside Elections currently rates Arizona as a Toss-Up.

In Florida, Biden’s polling leads have doubled since the beginning of June. Here also, the latest surveys showed him ahead: Fox News finding Biden +9, Change Research (D) finding Biden +7, and Siena College/The New York Times finding Biden +6. In an average of all seven Florida polls from June, Biden was ahead by 5.4 points (48 percent to 42.6 percent). Inside Elections currently rates the state as a Toss-Up.

While Trump carried Michigan by 10,704 votes statewide in 2016, new polls suggest this might be among Biden’s strongest battlegrounds. EPIC-MRA found him ahead by 16 points (compared to their early-June topline of Biden +12), while Siena College/The New York Times saw a slimmer Democratic advantage of eleven points. Yet two polls from Change Research (D) and Trafalgar Group (R), which respectively found margins of Biden +2 and Biden +1, added to an existing collection of dissonant toplines from Michigan. Still, the average across eleven polls in June landed at a Biden bonus of 9 points (49.9 percent to 40.9 percent). Inside Elections currently rates Michigan as Tilting Democratic. 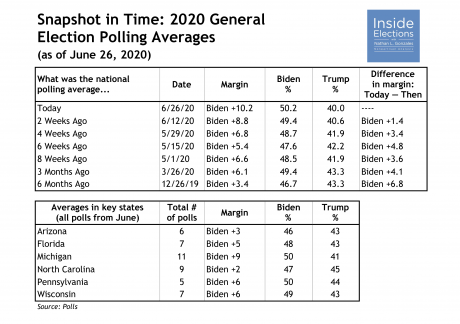 Next, surveys out of North Carolina didn’t crown a clear winner, either. Three polls found Biden ahead of Trump — including a nine-point lead from the Siena College/The New York Times, alongside three 2-point polls from Fox News, Public Policy Polling (D), and Change Research (D). But Gravis Marketing (R) saw Trump ahead by 3 points. Across an aggregate of nine North Carolina polls from June, Biden outperformed Trump by an average of 2 points (46.6 percent to 44.6 percent). Inside Elections currently rates the state as a Toss-Up.

Pennsylvania continues its 2020 streak of being sorely and surely under-polled; just four new surveys were released in the past two weeks. Siena College/The New York Times saw the former vice president ahead by 10 points, whereas Change Research (D) found a tighter three-point edge for Biden. Limited information from five June polls suggested a lead for the former vice president of 6.2 points (49.6 percent to 43.4 percent). Inside Elections currently rates Pennsylvania as Tilting Democratic.

In Wisconsin too, the former vice president’s lead has steadily increased. Three fresh polls each placed Biden ahead of Trump, with Siena College/The New York Times finding Biden +11; Marquette Law School finding Biden +9; and Change Research (D) finding Biden +4. For a longer-term idea of what’s happening here, turn to an aggregate of the seven polls from June: Biden led Trump by an average of 6.4 points (48.9 percent to 42.5 percent). Inside Elections currently rates Wisconsin as a Toss-Up.

Thus at the state level, available live telephone polling — as scant as it is — spins an especially positive story for the former vice president.

This story first appeared in Inside Elections with Nathan L. Gonzales on June 26, 2020.