With the Democratic primary in the rearview mirror, we can focus on the matchup between President Donald Trump and Joe Biden with a clear conscience.

Over the next six months, there will be a flurry of head-to-head polls, and handicapping the general election will assuredly rely upon public opinion polling.

But virtually any avid survey follower will give the same warning: “polls are a snapshot in time,” so don’t overreact to any single poll. Though these data points are (rightfully) mandatory for nearly any modern election forecast, there are still hearty discussions surrounding their predictive power.

Instead, this Snapshot in Time series seeks to understand polls as in-the-moment gauges of voter attitudes — exploring the latest presidential survey data and putting it into wider context. Averages, trends, and more will be analyzed to see how the race changes across the nation and especially in key states (in order to avoid one of 2016’s most critical handicapping mistakes).

So while future installments will include original deep dives of new polls or emerging patterns, particularly in the battleground states, it’s important to first know how things got here. RealClearPolitics averages are a great place to start.

A National Lens
According to RealClearPolitics today, Biden leads President Trump nationally by an average of 6.2 points (48.2 – 42). Here’s how that’s changed over time:

The differences might appear minor, but last month was among the most noteworthy periods in RCP’s tracking, a result of the ongoing COVID-19 pandemic. In fact, Biden’s lowest-ever average support in the horserace, 47.3 percent, was recorded just a few weeks ago on April 13, 2020. For comparison, President Trump's lowest average national support, 41 percent, came in September 2019 — exactly seven days after he asked National Security Advisor John Bolton to resign and announced plans to ban flavored e-cigarettes.

That same September week also saw the former vice president’s widest advantage of the entire campaign, 11.8 points. The smallest, a Biden lead of only 4 points, came in mid-January 2020, amid heightened tensions with Iran, the beginning of the president’s Senate impeachment trial, and the Jeopardy! Greatest of All Time Tournament. In short, while the national two-candidate polling average has moved within an 8-point range overall, the figure has so far always favored Joe Biden. 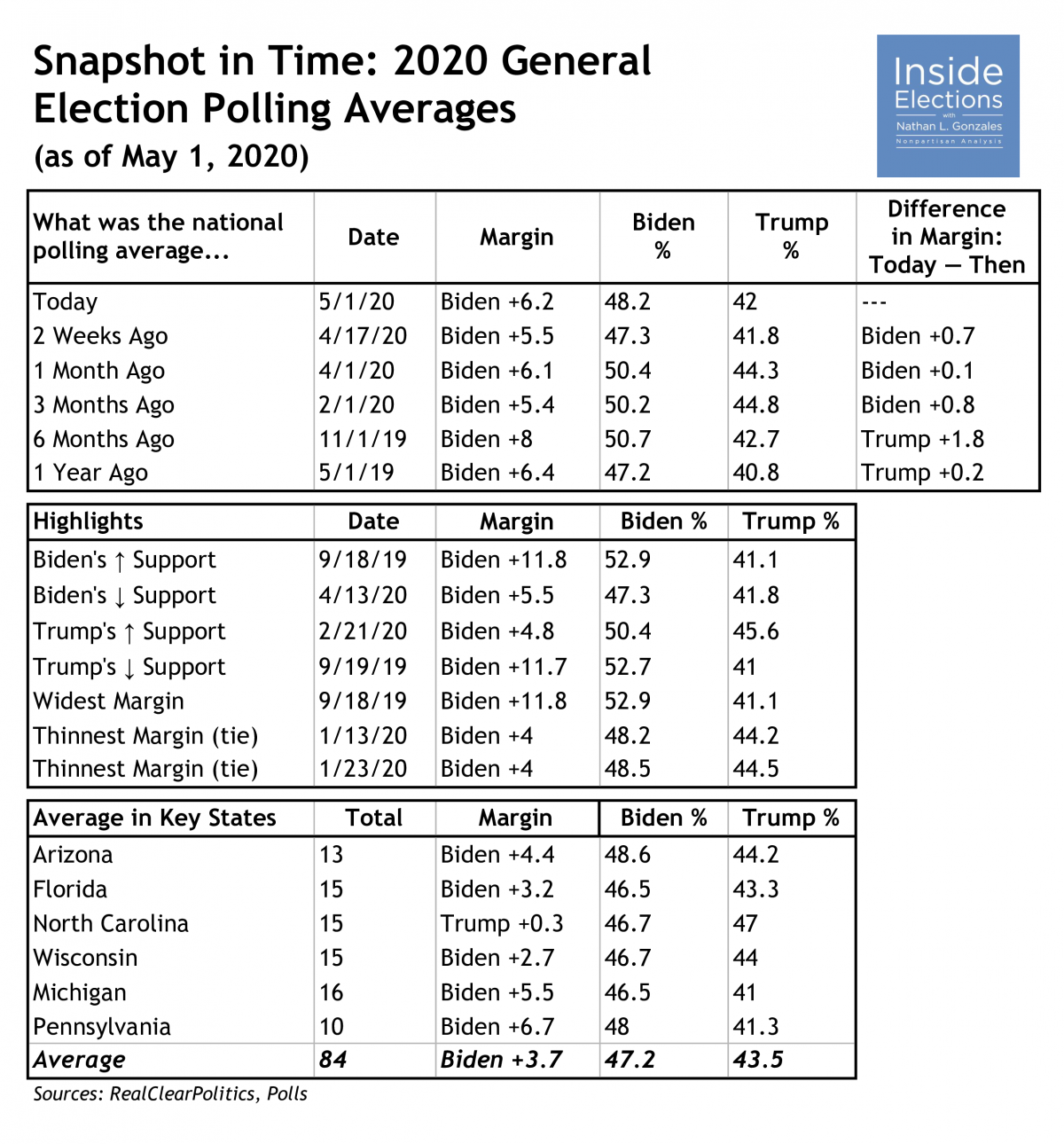 The States That Matter
Yet the real action is in the battleground states. In March, I counted every state-level general election poll conducted in 2016 and 2020, ultimately finding an imbalance: certain key states are surveyed substantially more than others.

Today, many increasingly close states still lack fresh data. Georgia has had two public polls since January 2020, and Minnesota has seen one survey in the past twelve months. Unsurprisingly, few new state-level polls came out in April, as the country came to a screeching halt because of the coronavirus, an unfortunate truth likely to continue into early summer.

Tracking trends is further complicated by the simple fact that fewer polls are fielded in individual states, especially this early in the year. Consequently, RealClearPolitics only provides trendlines for its national numbers, and for good reason — drawing “patterns” from data this scarce can be irresponsible.

Nevertheless, voters in the most competitive races are already receiving calls from pollsters. Across the states currently rated Toss-Up or Tilting by Inside Elections, all six have at least ten polls in the RealClearPolitics archives, good for a total of 84 surveys.

Arizona has 13 polls and is a Toss-Up. Its current RCP average (calculated from October onward) shows Biden with a lead of 4.4 points (48.6 – 44.2 percent). Two live telephone surveys were released in mid-March, and both found Biden ahead within the margin of error. Across all 13 polls, President Trump led in one; three suggested a tie.

Florida has 15 polls and is a Toss-Up. Its current RCP average (calculated from April onward) shows Biden with a lead of 3.2 points (46.5 – 43.3 percent). Live telephone polls of Florida conducted throughout March placed the former vice president around that same mark, whereas local pollsters found varied numbers via online and interactive voice response panels. Across all 15 polls, President Trump led in three; three suggested a tie.

Wisconsin has 15 polls and is a Toss-Up. Its current RCP average (calculated from March onward) shows Biden with a lead of 2.7 points (46.7 – 44). Despite the former vice president enjoying a mean advantage of 9 points in very early polls of the state, all surveys this year suggested a closer race. Across all 15 polls, President Trump led in two; one suggested a tie.

Michigan has 16 polls and Tilts Democratic. Its current RCP average (calculated from March onward) shows Biden with a lead of 5.5 points (46.5 – 41). Available polls tell a story similar to Wisconsin: Biden’s initial double-digit margin has been cut in half. At this point, President Trump hasn’t led in any of the 16 Michigan polls; one suggested a tie.

Pennsylvania has 10 polls and Tilts Democratic. Its current RCP average (calculated from March onward) shows Biden with a lead of 6.7 points (48 – 41.3). His childhood home state, this has been among the former vice president's strongest-polling battlegrounds — mid-April Fox News data showed Biden ahead by 8 points, though a few older surveys painted a tighter race. So far, President Trump hasn’t led in any of the 10 Pennsylvania polls; one suggested a tie.

Changing Course
Using these toplines from Arizona, Florida, North Carolina, Wisconsin, Michigan, and Pennsylvania, President Trump trails Joe Biden by an average of 3.7 points in these battleground states. Pair that with his 6-point deficit nationwide, and it’s clear the incumbent is behind.

Of course, it’s important to remember that the race for president is a state-by-state competition and can change over time. But with the current lack of state-level data, even modest trend-based poll analysis is truly appropriate for just a handful of states right now,although new data will eventually expand our analysis to include trendlines for each state and potentially expanding the conversation beyond the initial six.

So despite Biden’s early advantages, there’s a potential for movement: after all, the gap has seemingly closed in places such as Michigan and Wisconsin. Moreover, due to the compounding uncertainty of COVID-19, it would be a fool’s errand making inferences too far ahead.

In other words, Biden has an inarguable lead today according to public polling, but three or six points shouldn’t be characterized as comfortable. As the race changes — and additional state-level polls trickle in — more twists and turns will inevitably arise before November’s election.

This story first appeared in Inside Elections with Nathan L. Gonzales on May 1, 2020.