Tennessee Redistricting: Down a Democratic District on Music Row

Tennessee saw relatively few changes to its congressional map following the most recent round of redistricting, but new lines in the Nashville area almost ensure there will be a change in the partisan composition of its House delegation.

The Volunteer State keeps its nine congressional seats, and while most of those districts will resemble their current configurations, the 5th District will look much different. Formerly a dependably Democratic district anchored around Nashville, it was effectively eliminated by Republican mapmakers in the state Legislature, meaning Davidson County is now split like a pinwheel between three GOP-favored districts. (A similar plan had been discussed during the redistricting process post-2010, but was ultimately decided against.)

With these changes to the map, the median Republican-leaning district would have voted for President Donald Trump by 30.7 points in 2020, according to a composite of all statewide and federal races in Tennessee between 2016 and 2020 calculated by Inside Elections. On the flipside, the state’s sole Democratic-leaning district, the 9th, voted overwhelmingly in favor of Joe Biden.

Republicans currently have a 7R-2D advantage in the state’s congressional delegation. With the GOP favored to flip the redrawn 5th District, the most likely outcome is that Tennessee sends eight Republicans and one Democrat to Congress. None of the new seats look to be especially competitive this November.

1st District
The 1st is Tennessee’s easternmost district, containing the Tri-Cities of Kingsport, Johnson City, and Bristol, as well as Morristown. Its lines stay practically the same, the primary difference being reduced reach into Jefferson County. The 1st preferred Republicans by an average of 52.7 points according to the composite of 2016-2020 elections, and Trump would have carried the district by 54 points in 2020, 76-22 percent. Freshman Republican Rep. Diana Harshbarger, who won a close and crowded primary in 2020, shouldn’t be in danger. Initial Rating: Solid Republican.

2nd District
The 2nd is centered around Knoxville. Around the edges, it picks up Union County while trading much of its coverage in Jefferson County for more of Campbell County. Republican Rep. Tim Burchett should have little problem in this district that voted for Republicans by an average of 28.4 points in the 2016-2020 composite, and for Trump by 29 points in 2020. Solid Republican.

3rd District
Another district in East Tennessee, the 3rd contains Chattanooga. It now drops Union County entirely, and loses some of its northern area in Scott and Campell counties to fill out Bradley County in the south. The district had an average partisanship of R+30.2 in the 2016-2020 composite of elections, while Trump would have won by 32 points in 2020. This almost surely means a seventh term for Republican Rep. Chuck Fleischmann. Solid Republican.

4th District
Located primarily in the southern half of Middle Tennessee, the 4th’s largest city is Murfreesboro. At its margins, the district loses Maury and Murphy counties to make way for the reconfigured 5th District, and it also drops Van Buren and Bradley counties in the east, gaining Lawrence, Giles, and Coffee counties in return. The 4th voted for Republicans by an average of 35.4 points in the 2016-2020 composite, and would have voted Trump+38 in 2020. Republican Rep. Scott DesJarlais, who has survived multiple primary challenges during his time in office despite serious personal baggage, should have a comparatively low-key re-election campaign this year. Solid Republican.

5th District
The 5th was changed substantially in redistricting, shifting the district substantially toward Republicans. Formerly a reliably Democratic seat centered on Nashville, the redrawn lines snake through Middle Tennessee, picking up all of Lewis, Maury, and Marshall counties, as well as portions of Williamson, Davidson, and Wilson counties. The new 5th preferred Republicans by an average of 11.7 points in statewide and federal elections between 2016 and 2020; Trump would have carried the district by around 11 points in 2020, 55-43 percent.

In light of these changes, Democratic Rep. Jim Cooper is retiring after 17 nonconsecutive terms. (Cooper was first elected to the House in 1982, gave up his seat in an ill-fated bid for Senate in 1994, and returned in 2002.) There are many Republicans running to replace him: the best-funded on March 31, attorney/retired Brigadier General Kurt Winstead, is also heavily self-funded; former state House speaker Beth Harwell is in the field too, as is Maury County Mayor Andy Ogles. Republican candidates Baxter Lee, Morgan Ortagus (endorsed by Trump), and Robby Starbuck were removed from the primary ballot by the Tennessee Republican Party in April for failing to vote in a sufficient number of previous statewide primary elections, a party requirement to demonstrate bona fides. State Sen. Heidi Campbell is running on the Democratic side.

Former Democratic Gov. Phil Bredesen’s strong performance here in the 2018 Senate election (he tied Rep. Marsha Blackburn here, 50-50 percent) suggests this seat could potentially be in play for Democrats in future elections. But this year, it will probably be Republicans who have the national environment at their backs — putting the party in a position to flip this district. Likely Republican.

6th District
The 6th is positioned east of Nashville, now taking in portions of Davidson County. It loses most or all of its reach into Cheatham, Coffee, Robertson, and Wilson counties, while adding parts of Scott County and the remainder of Van Buren County. The district had an average partisanship of R+23.6 in the 2016-2020 composite and voted for Trump by 28 points in 2020 — all good news for Republican Rep. John Rose. Solid Republican.

7th District
Largely to the west of Nashville, the 7th contains cities such as Clarksville and Franklin. The new boundaries drop over half a dozen rural counties in the south and see additional changes around Dickson, Cheatham, and Davidson counties to accommodate the new 5th District. Democratic activist Odessa Kelly, originally running in the 5th District, has jumped over to instead run here. But Republican Rep. Mark Green doesn’t have much to worry about in this district that voted for Trump by 16 points in 2020, and for Republicans by an average of 14 points in the composite of 2016-2020 elections. Solid Republican. 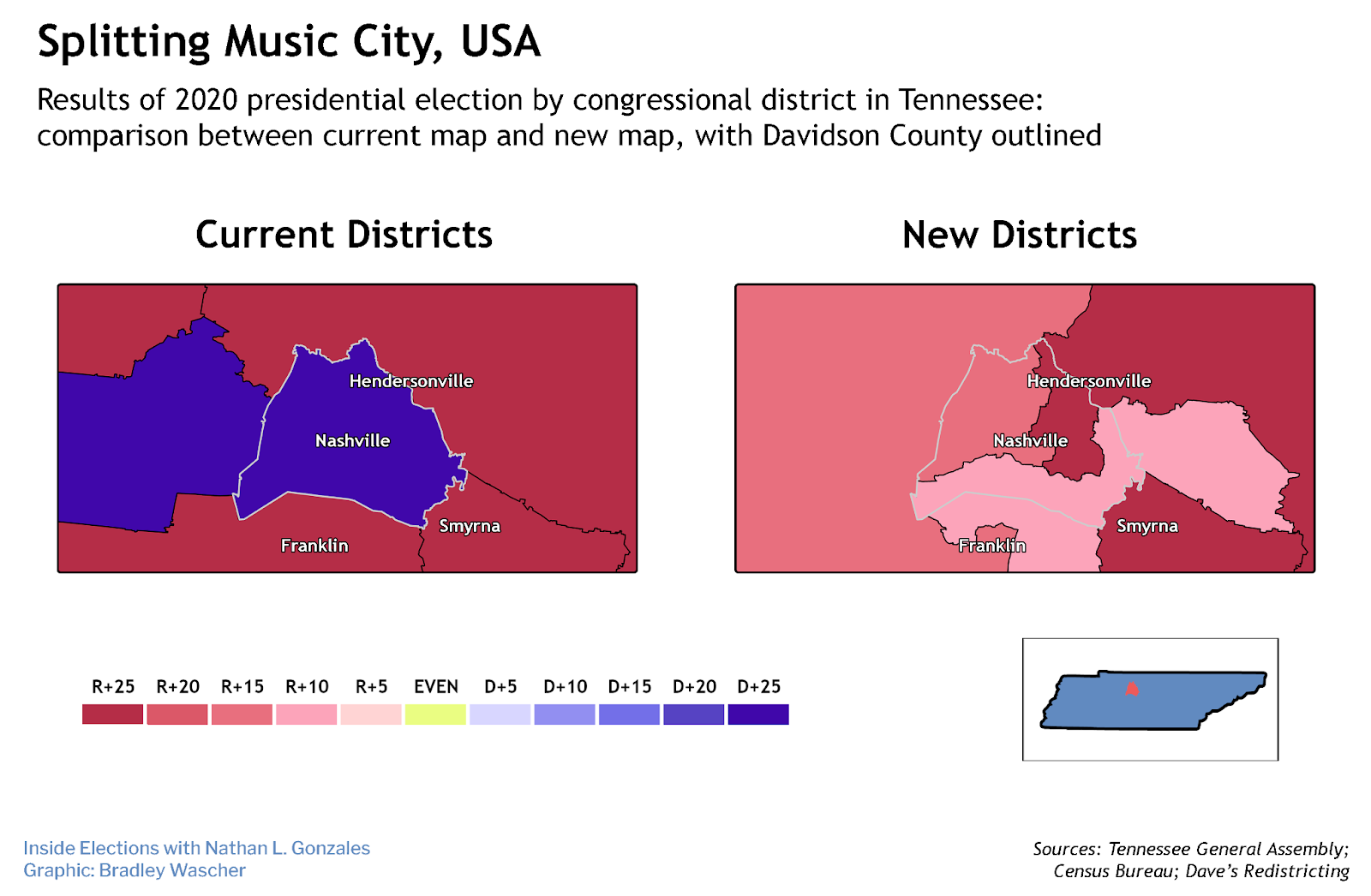 8th District
The 8th spans northwestern Tennessee, including Jackson. It picks up Chester, Hardeman, Hardin, Henderson, and McNairty counties, rearranges its coverage in Benton County, and loses portions of Tipton County. The 8th’s average partisanship was R+34.8 points according to the 2016-2020 composite, and Trump would have won here by 35 points in 2020, so Republican Rep. David Kustoff looks pretty safe. Solid Republican.

9th District
The Memphis-based 9th is Tennessee’s southwesternmost district. Long confined to parts of Shelby County, it now gains a western slice of Tipton County. The district voted for Democrats by an average of 43.9 points in statewide and federal elections between 2016 and 2020, making it the only district in Tennessee where Democrats are favored. Republicans running this year include gun rights lobbyist Brown Dudley and Charlotte Bergmann, who has previously sought this seat four times (and was her party’s nominee three of those times). But the majority-Black district would have voted for Biden by over 45 points in 2020, and the only danger Democratic Rep. Steven Cohen has to look out for is in a primary. As the only white congressman in the country who represents a majority-Black district, he’s had to stave off serious challenges before, but this year the only other Democrat running is perennial candidate M. Latroy Alexandria-Williams. Solid Democratic.

This story first appeared in InsideElections.com on May 23, 2022.