Democrats defied expectations by expanding their Senate majority in 2022 — but what exactly were those expectations? And Republicans nominated a number of underwhelming candidates, but how much did they actually underperform? Vote Above Replacement (VAR) can provide some empirical context to 2022 narratives.

VAR measures the strength of a political candidate relative to a typical candidate from their party within the same state. That initial benchmark is derived using Inside Elections’ Baseline, which captures a state or congressional district’s political performance by combining all federal and state election results over the past four election cycles into a single trimmed mean. VAR is simply the candidate’s share of the vote minus the party’s Baseline. A higher VAR indicates a strong performance relative to expectations.

Across the 32 Senate races featuring one Democrat against one Republican (Alaska, Louisiana, and Utah are therefore excluded), each politician performed an average of 3.1 points better — or worse — relative to a typical candidate from their party in that state. (For comparison, the same figure for 2022 gubernatorial candidates was 4.7, possibly suggesting that the gubernatorial races were more heavily influenced by candidate quality, or less constrained by partisanship.) These averages are close to the post-2020 VAR numbers, which makes sense given the small movements in Baseline over the last two years, never mind the general forces of political polarization and partisan sorting.

A candidate’s VAR arguably mattered the most in key battleground races. Across the eight states rated as Toss-up, Tilt, or Lean in our final Senate ratings, Democratic nominees overperformed their party’s benchmarks in six of those states (with an average 1.7 VAR across the eight battlegrounds). Republicans underperformed in six states (an average -1.1 VAR). 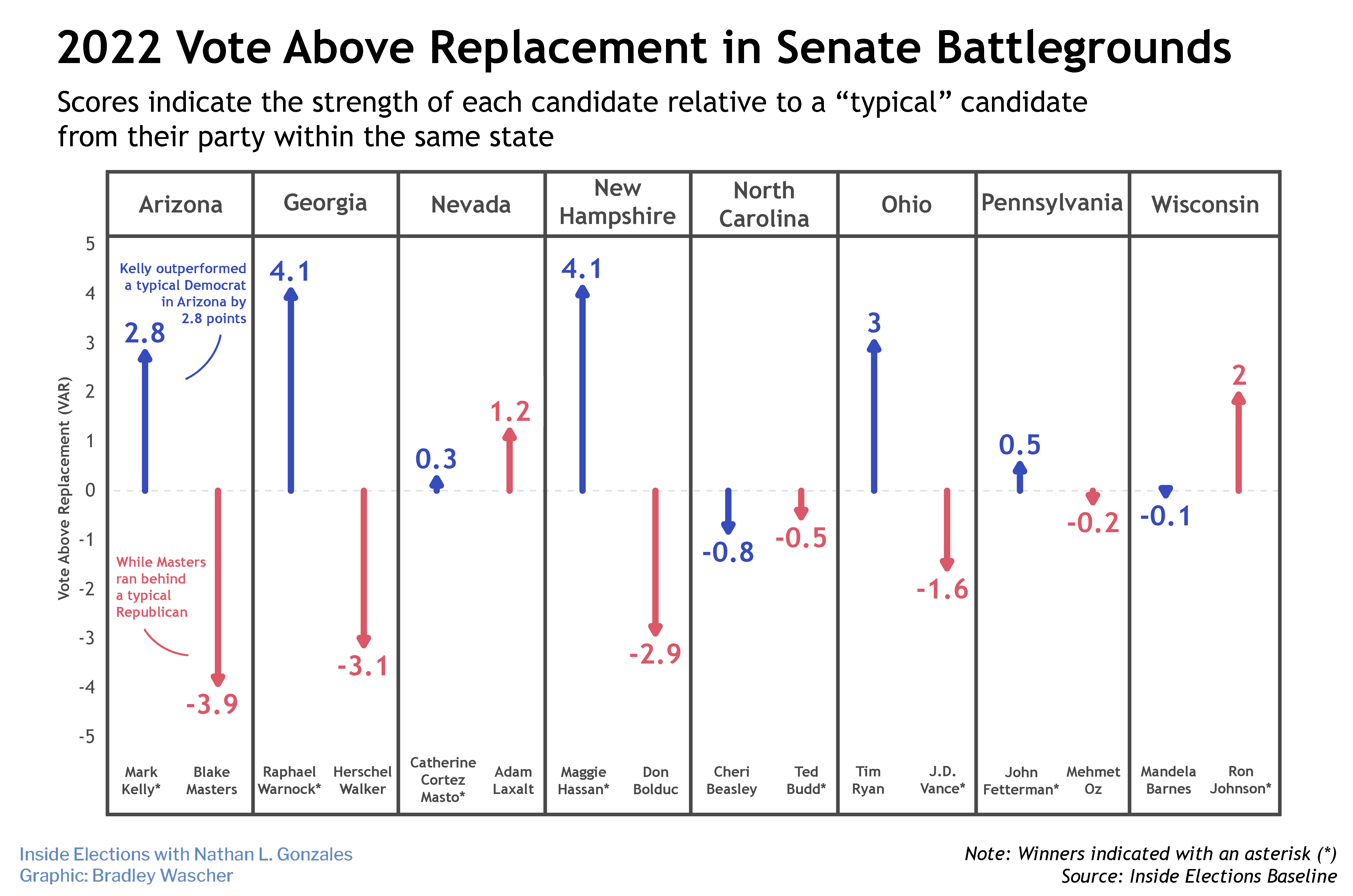 One state where both nominees exceeded Baseline expectations was Nevada. Democratic Sen. Catherine Cortez Masto ran only slightly ahead of the typical Democrat, finishing with a VAR of 0.25 (she received 48.8 percent compared to the 48.6 percent Democratic Baseline). Her Republican challenger, former state Attorney General Adam Laxalt, outperformed the typical statewide Republican by 1.2 points (48 percent vs. 46.8 percent Republican Baseline). The fact that both major party nominees outperformed expectations showed the less prominent role of third-party candidates in the Nevada Senate race this cycle — the Silver State has a history of supporting more third-party candidates, and Nevada voters also have the option to vote for “none of these” candidates.

While Laxalt was one of the GOP’s stronger nominees in a battleground this cycle, most of his counterparts in other states fell short. In Arizona, venture capitalist Blake Masters ran behind the GOP Baseline by 3.9 points, while Democratic Sen. Mark Kelly ran ahead of the average Democratic Baseline by 2.8 points. In Georgia, football legend Herschel Walker lost with a -3.1 VAR against Democratic Sen. Raphael Warnock’s 4.1-point overperformance. (For reference, Warnock won the 2021 special runoff by outpacing the typical Democrat by 5 points, compared to GOP nominee Kelly Loeffler’s -4.1 VAR.) And most crucially in Pennsylvania, Democratic Lt. Gov. John Fetterman landed 0.5 points above the Democratic Baseline, while celebrity surgeon Mehmet Oz lagged 0.2 points behind the Republican Baseline.

The GOP-held Senate seats produced a mixed bag of VAR scores. In Ohio, Democratic Rep. Tim Ryan ran 3 points ahead of the Democratic Baseline, despite losing to author J.D. Vance, who posted a -1.6 VAR. In North Carolina, former state Supreme Court chief justice Cheri Beasley underperformed a typical Democrat by 0.8 points. Republican Rep. Ted Budd also fell short of his party’s benchmark by 0.5 points, but because North Carolina has a GOP-leaning Baseline (R+2.9), Budd didn’t need an overperformance to secure his spot in the Senate.

A similar situation played out in Wisconsin, where Democratic Lt. Gov. Mandela Barnes fell just short of his party’s Baseline (VAR: -0.1) but Republican Sen. Ron Johnson did 2 points better than a typical statewide Republican. Although Wisconsin as a state flipped in Democrats’ favor in the post-2022 Baseline update, Johnson’s overperformance kept the seat in Republican hands.

Other VAR results provide a peek at how Baseline works under the hood. 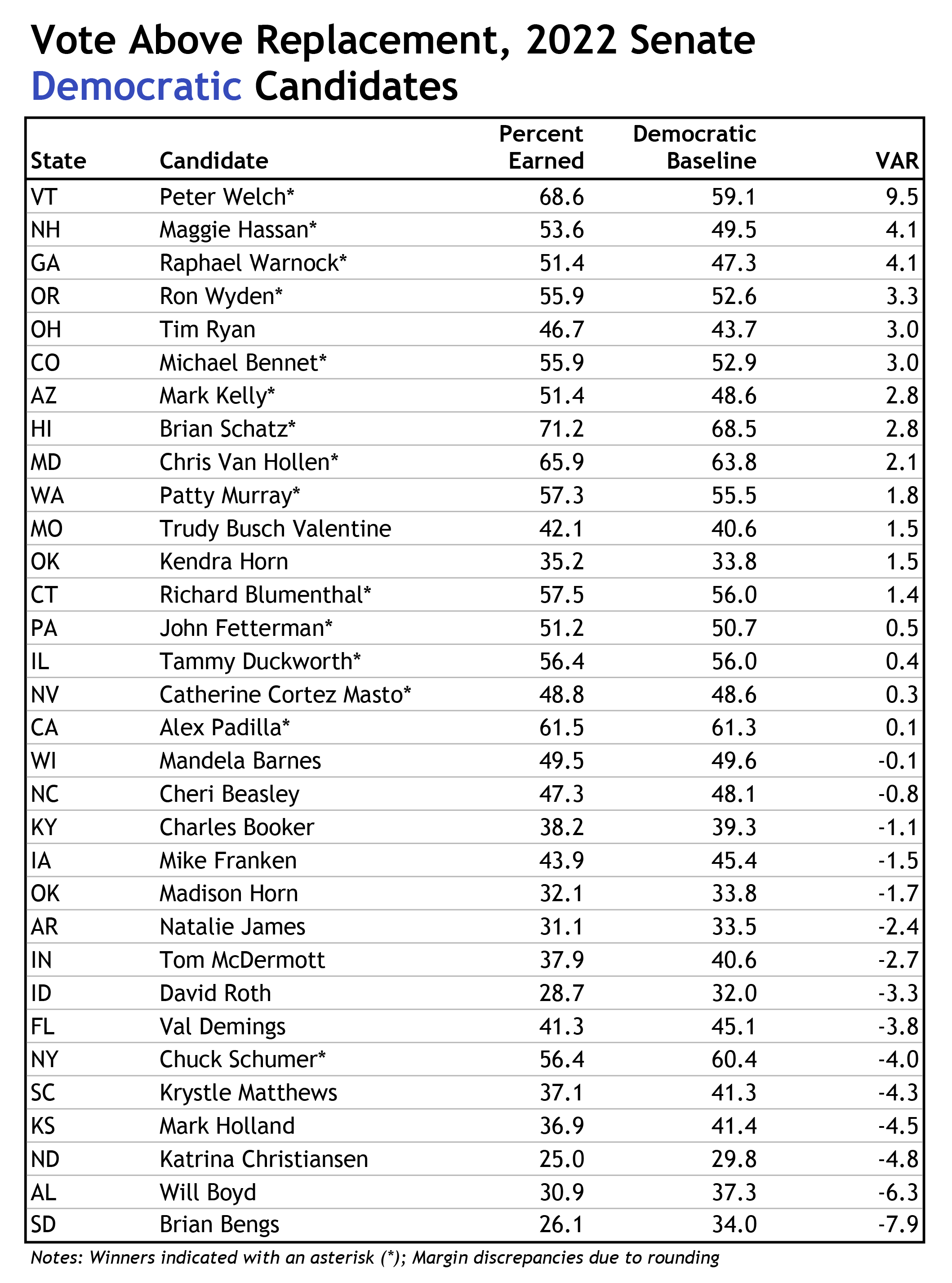 In the lead-up to the election, New Hampshire Sen. Maggie Hassan’s seat was considered vulnerable. She finished 1.3 points below the Democratic Baseline in 2016, though that was enough to eke out a photo finish win against GOP Sen. Kelly Ayotte. But this time, Hassan won with a VAR of 4.1, while her challenger, retired Army Brigadier General Don Bolduc, had a -2.9 VAR.

Hassan’s overperformance follows a strong showing in 2020 from New Hampshire’s senior senator, Jeanne Shaheen, whose 6.7 VAR was the highest of any Senate Democrat that year. But it isn’t shocking that the Granite State is friendlier to its incumbent Democratic senators than VAR might suggest. New Hampshire’s Baseline averages are heavily influenced by the state’s popular Republican governor, Chris Sununu, who won re-election by 31.7 points in 2020 and 15.5 points in 2022. That’s why the state’s post-2022 Baseline margin (D+2.1) is noticeably narrower than the 2020 presidential margin (Joe Biden’s 7.4-point victory). Sununu’s 2020 win is excluded from Baseline’s calculations because the trimmed mean ignores the single best performance from each party, but if his other victories are also removed from the mix, New Hampshire’s margin jumps to D+7.

For evidence beyond New Hampshire that a uniquely electable GOP governor can pull up the Republican Baseline and bring down the Democratic Baseline in an otherwise blue state (thereby inflating the Democratic candidate’s VAR), look next door. The candidate with the highest Senate VAR for either party in 2022 was Democratic At-Large Rep. Peter Welch of Vermont, who outperformed a typical statewide Democrat by 9.5 points in his 41-point rout of GOP retired Army officer Gerald Malloy (VAR: -7.5). Welch can thank GOP Gov. Phil Scott for making him look good, as Scott’s big wins — 46 points in 2022, 41 in 2020, 15 in 2018 and 9 in 2016 — shift Vermont’s Baseline toward Republicans. Incidentally, Welch’s share of the vote in November (68.6 percent) is much closer to Biden’s 2020 share in Vermont (66.1 percent) than the statewide Democratic Baseline (59.1 percent).

State Rep. Rick Becker, an independent candidate and former Republican, finished third with nearly one-fifth of the vote, and it’s likely that Becker’s attempt at playing spoiler also contributed to Democrat Katrina Christiansen underperforming her own party’s benchmark by 4.8 points. 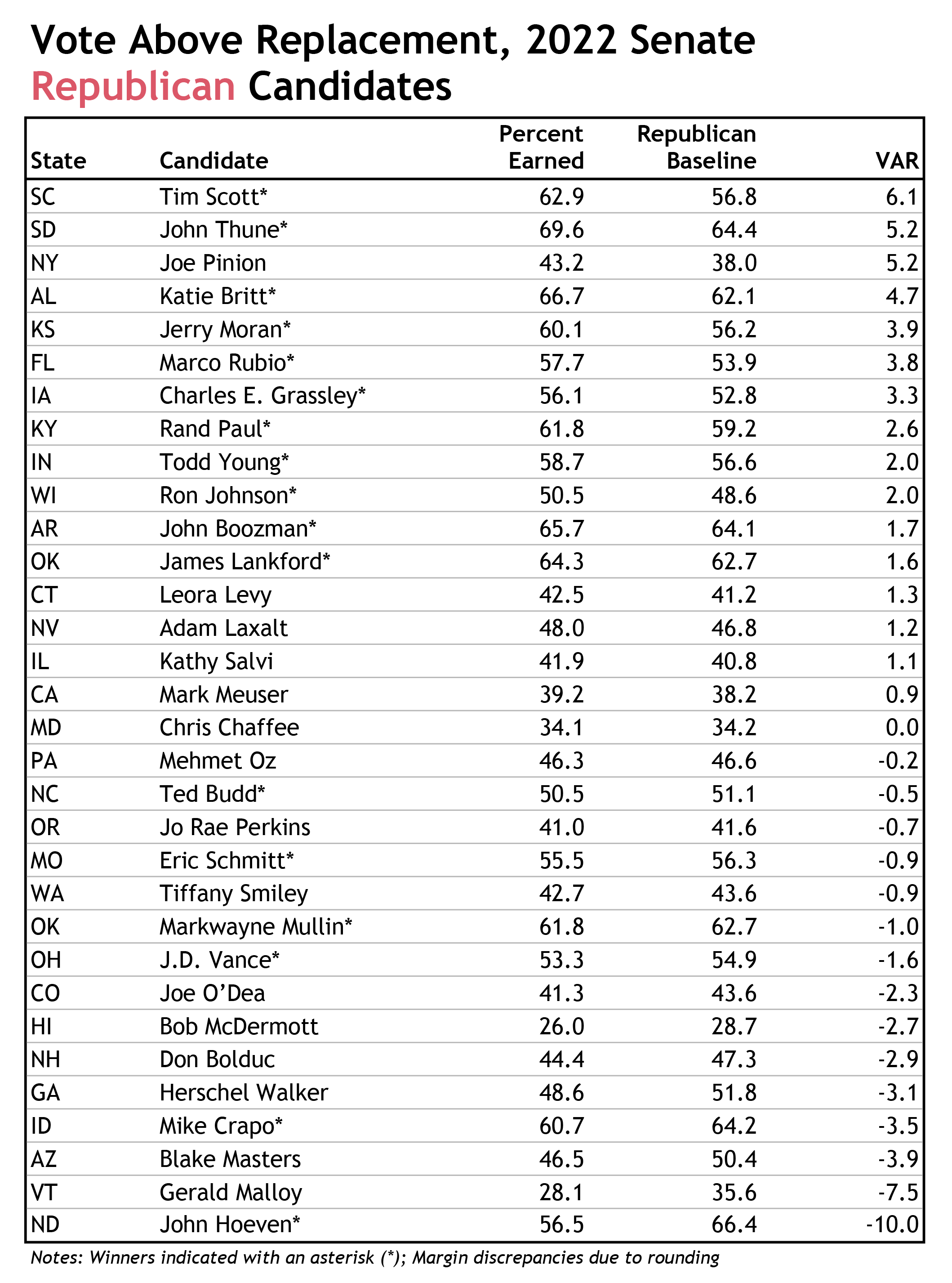 There are many possible explanations for this divergence, including Kendra Horn, a former officeholder, being a higher caliber politician than Madison Horn (no relation). But one of the simplest is that Lankford was an incumbent senator while Mullin was not. Although the incumbency advantage seems to have shrunk over time, recent research still estimates the boost to be worth around 2 or 3 points. As it happens, among Oklahoma’s two Republican Senate nominees the difference in vote share (and VAR) between the incumbent and the non-incumbent was 2.6 points. More broadly, the difference in median VAR between the incumbents and the non-incumbents was 2.3 points across all 32 Senate races — inspiring some confidence in Baseline’s ability to capture the relative performance of candidates, both typical and not.

This story first appeared in Inside Elections with Nathan L. Gonzales on December 16, 2022.