Arizona’s independent redistricting commission unanimously passed a new congressional map that maintains the state’s breakdown of five districts carried by Joe Biden in the 2020 election and four districts carried by President Donald Trump, but also affords Republicans great opportunities to flip two Democratic-held seats and reclaim a majority of the state’s delegation for the first time since 2018.

Democrats continue to make gains in the Grand Canyon State. They hold both U.S. Senate seats for the first time since 1952 and have the best chance to win the governor’s mansion in over a decade. But the new map could see their share of the House delegation reduced from five to just three of nine seats next year, given the poor national environment. In a better year for Democrats, they could conceivably win six of the state’s nine seats. 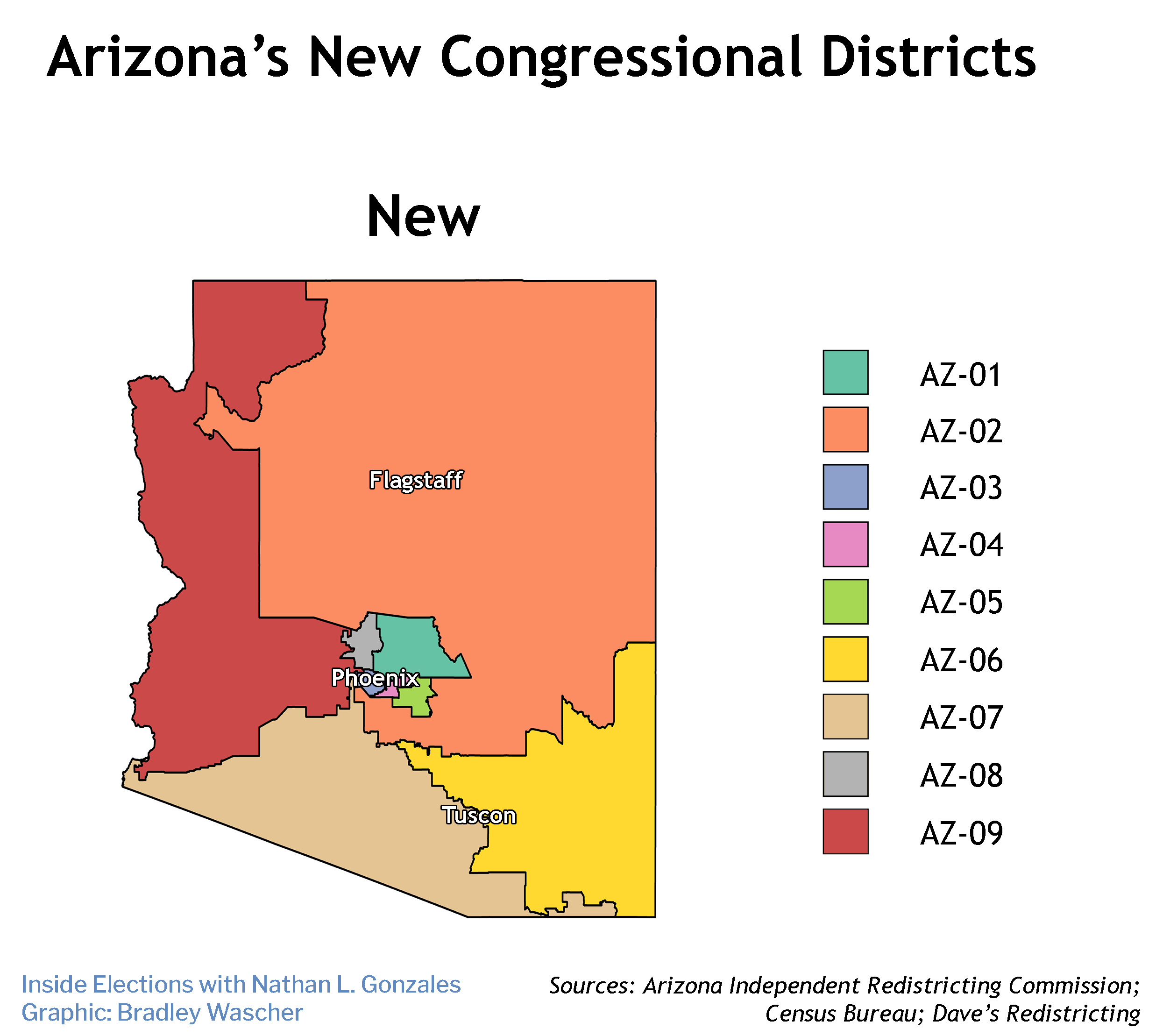 1st District
The new 1st District is the successor to the old 6th District, in the northeast Phoenix suburbs and Scottsdale. Republican David Schweikert will run here. His district sheds some of north Phoenix but picks up some of more Democratic downtown Phoenix, as well as some expansive but sparsely populated land in eastern Maricopa County.

The new district would have voted for Biden by 1 point, 50-49 percent, compared to Trump’s 51-47 percent win under the old lines.

Schweikert, who came under fire in 2020 after admitting to a laundry list of campaign finance violations, faces challenges from all sides.

In the GOP primary, he’ll have to get through 31-year-old Elijah Norton, a wealthy automotive finance and insurance executive who is already taking aim at Schweikert’s financial wrongdoings. Norton only moved to Arizona a few years ago but has already loaned his campaign $1.25 million and has raised another $331,000 through the end of September.

Business consultant Jevin Hodge, who lost a Maricopa County supervisor election in 2020 by 0.08 percent, and former Phoenix Suns executive Adam Metzendorf are both running as Democrats. Hodge had $103,000 in the bank on Sept. 30. Metzendorf entered the race after the latest filing deadline. Hiral Tipirneni, the Democratic nominee for the 8th District in 2018 and the 6th District in 2020 (she lost to Schweikert, 52-48 percent) could run again as well.

Schweikert has a history as a lackluster fundraiser. He raised just $493,000 in the first nine months of the year and had $291,000 in the bank on Sept. 30. Given his poor fundraising, his ethical issues, and the district’s partisan lean, this is a plausible pickup opportunity for Democrats. While the national environment and unsettled Democratic field give Schweikert an initial edge, this race will be one to watch. Lean Republican.

2nd District
The best pickup opportunity for Republicans is in the new 2nd District, which is the successor district to the old 1st District. While the district still sits in the northeast quadrant of the state and includes all of Apache, Navajo, and Coconino counties, its southern border is changed, most significantly by the addition of heavily Republican Yavapai County.

As a result, while the old district voted narrowly for Biden in 2020, 50-48 percent, the new district would have voted for Trump by a much wider 8-point margin, 53-45 percent.

That has not warded off incumbent Democrat Tom O’Halleran from running for re-election to the new district, but it does mean he’ll start as an underdog.

Despite having been a Republican until 2014, O’Halleran has not demonstrated significant crossover appeal in his congressional races since 2016. That year he beat Pinal County Sheriff Paul Babeu 51-43 percent even as Trump carried his district, 47-46 percent. But in 2018 O’Halleran won by 8 points, 54-46 percent, as Democratic Senate nominee Kyrsten Sinema carried the district by 5 points, 51-46 percent. And in 2020, when O’Halleran was targeted by national Republicans, he eked out a 3-point win, just a hair ahead of Biden.

Republicans have a primary to sort through first, between state Rep. Walter Blackman, the first Black Republican ever elected to the Arizona state legislature, and Navy SEAL veteran Eli Crane, who now runs a company that makes bottle openers out of ammunition. Blackman has locked up support from GOP leadership in the state legislature, but Crane had more money in the bank on Sept. 30 ($225,000 to Blackman’s $104,000).

Given the new district’s partisan lean, O’Halleran ($920,000 in the bank on Sept. 30) faces an uphill climb. Lean Republican.

3rd District
Democratic Rep. Ruben Gallego’s downtown and West Phoenix district is renumbered to be the 3rd, rather than the 7th, but is otherwise largely unchanged. It would have voted for Biden by 51 points, 75-24 percent. The biggest question surrounding Marine veteran Gallego is if he challenges Sinema in the Democratic Senate primary in 2024. Solid Democratic.

4th District
The new 4th is Democrat Greg Stanton’s district (previously numbered 9th). It loses Democratic portions of central Phoenix and Scottsdale and picks up Republican precincts in Mesa. That makes the district significantly less Democratic. Biden would have won it by just 10 points, 54-44 percent, rather than his 61-37 percent win under the old lines. That should be enough of a cushion for Stanton but this could be a particularly bad cycle for Democrats. As of now the only Republican candidate is Tanya Wheeless, a former deputy chief of staff to then-Sen. Martha McSally. Stanton had $1.3 million in the bank on Sept. 30, compared to $190,000 for Wheeless. Likely Democratic.

5th District
The 5th District sheds the northern portion of Mesa to the new 4th District and picks up Apache Junction and Sun Tan Valley to the west and south. Overall, the partisanship of the district is unchanged. Trump would have won it 57-41 percent. Andy Biggs, the outgoing chairman of the House Freedom Caucus, shouldn’t have trouble winning another term. Solid Republican.

6th District
The new 6th is the second pickup opportunity for Republicans. The successor district to the old 2nd District in the southeast corner of the state, the new 6th sheds some of its most Democratic Tucson precincts and picks up Republican areas in Greenlee, Graham, and Pinal counties.

Incumbent Democrat Ann Kirkpatrick is not seeking re-election. Running to succeed her on the Democratic side are former state Sen. Kirsten Engel, and state Rep. Daniel Hernández Jr. Engel has a slight financial advantage ($414,000 in the bank on Sept. 30 compared to $351,000 for Hernández). But Hernández, who as a congressional intern helped save the life of Democratic Rep. Gabby Giffords after she was shot, has backing from nationwide Latino and LGBTQ groups including BOLD PAC, LGBTQ Victory PAC, and Equality PAC.

On the Republican side, the initial frontrunner is Juan Ciscomani, a senior adviser to Gov. Doug Ducey who was recently named to the NRCC’s “On the Radar” watch list and had $569,000 in the bank on Sept. 30. But he’ll have to get through surgeon Douglas Lowell first.

With no incumbent and an evenly divided electorate, the 6th is poised to be one of the most competitive House races in the country next year. Tilt Republican.

7th District
The new 7th District is nearly identical to the old 3rd District. It still stretches across nearly the entire southern border, now extending even further east to Douglas, and includes West Tucson and a slice of western Phoenix.

Having picked up some Democratic Tucson precincts from the old 2nd, the 7th is slightly more Democratic than the old 3rd. It would have voted for Biden, 66-33 percent. That’s more than enough to send House Natural Resources Committee chairman Raul Grijalva back to Congress. Solid Democratic.

8th District
Republican Debbie Lesko’s district keeps its number but the center of gravity moves slightly north. The 8th sheds much of its suburbs west of Phoenix and picks up the entire city of Peoria. But the district also now includes more of Phoenix proper, which means its overall shift is slightly toward Democrats. Trump would have carried this new seat 56-43 percent, compared to 57-41 percent under the old lines. That’s not enough to make Lesko sweat. Solid Republican.

9th District
The new 9th District is the successor to Republican Paul Gosar’s old 4th District. While it still spans the entire western side of the state, from Utah to Yuma, the district no longer has its central appendage that curled around Phoenix through Maricopa, Yavapai, Gila, and Pinal counties. Instead, the district only takes in the northwest corner of Maricopa County, extending east to Glendale.

The new seat would have voted for Trump, 62-36 percent. That’s down from Trump’s 68-31 percent win under the old lines, but still enough to make it the most Republican district in the state. Delina DiSanto, the Democrat who ran against Gosar in 2020 and lost, 70-30 percent, is running again, as is 2020 state Housecandidate Judy Stahl. They’ll both get lots of Twitter followers and national attention due to Gosar’s association with white nationalists and penchant for other controversy. But they won’t stop the recently censured representative from returning to Congress — and, if the GOP takes back the majority, his committee assignments — next year. Solid Republican.

This story first appeared in InsideElections.com on December 30, 2021.